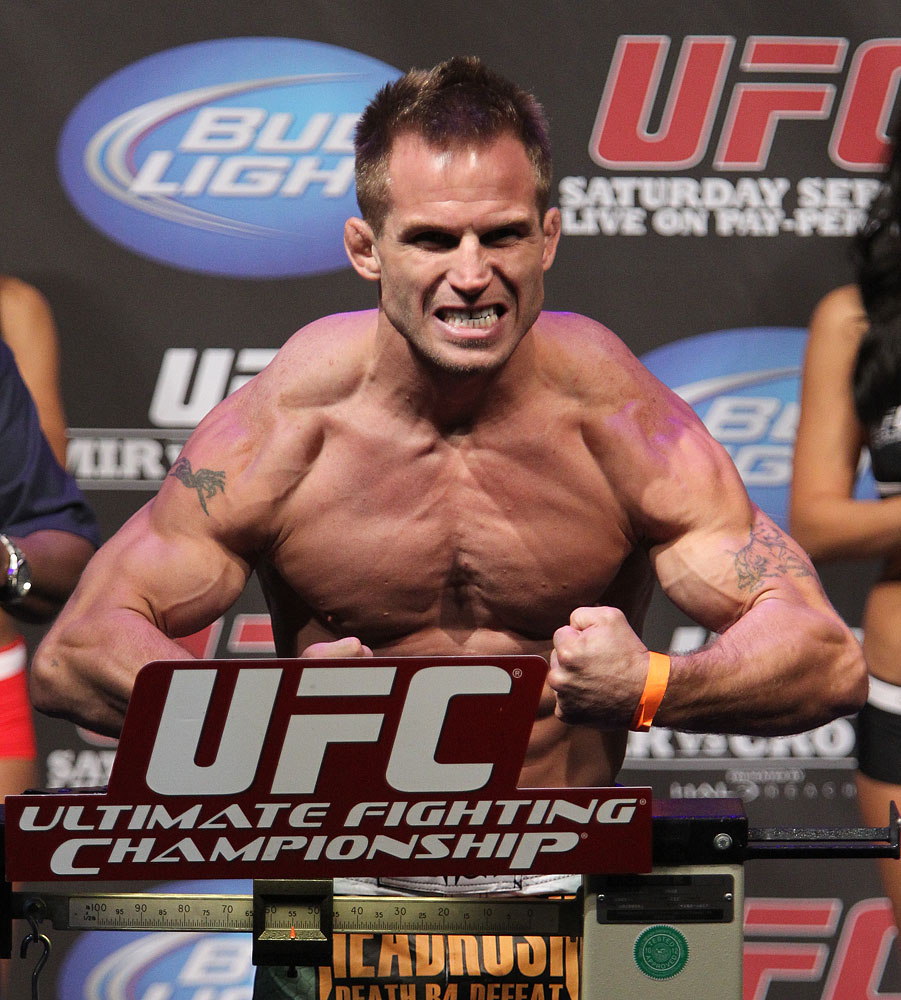 You may not get anyone who knows what a “Muscle Shark” is, but one look at Sean Sherk would likely make you say ‘yeah, that’s it.’

Think of a fighter seemingly chiseled out of stone, one who would relentlessly stalk until he smelled blood, and then it was time to go for the finish. For more than a decade, that’s what the Minnesotan brought to the world of mixed martial arts, and after a career that saw him win the UFC lightweight title and challenge for the organization’s welterweight crown, injuries finally prompted the 40-year-old to call it quits, with a retirement announcement being made on September 2.

It was the end of a run that Sherk would have likely wanted to finish with another few fights in the Octagon, where he compiled an 8-4 record, but what fighter is truly satisfied with retirement when he feels that he still has more to give?

Certainly not a competitor like Sherk, who not only reached the pinnacle of his sport, but also evolved over the course of his time in it, with his powerhouse wrestling attack being enhanced by a boxing style that allowed him to stand with the best of them on fight night. He was also one of the rare fighters who was able to bridge the gap between the early days of the sport and the modern era successfully, a testament to his skill and work ethic.

It was this determination that led him to a 19-0-1 record and a showdown with a prime Matt Hughes for the UFC welterweight title in 2003 (watch Hughes vs. Sherk). A grueling five-round battle ensued, with Hughes emerging victorious, but not without knowing he was in a fight.

“I think my gameplan wasn’t what it should have been,” Sherk told me in 2005.  “I went out there with a game plan which I had never had in the past and I lost the first fight of my career.  You can’t make any mistakes against a guy like Matt Hughes.  You make a mistake against a guy like that and your night’s gonna be over pretty fast.  Other than that, my conditioning was great, and I never really felt like I was in any great jeopardy at any point in time, and maybe another round or two and I could have pulled off a decision, who knows.”

That’s classic Sherk, having the will and cardio to ask for another round or two after a five round fight. But despite his effort against Hughes, he wouldn’t return to the UFC for another two and a half years, but he kept fighting and winning, grounding and pounding his way to a 32-1-1 slate.

Ultimately, the business side of the sport was getting him down though, and he battled it out on the local circuit, he started his own company in addition to working a 9 to 5 to support his family.

Then the UFC called, welcoming him back with a new contract. That was the good news. The 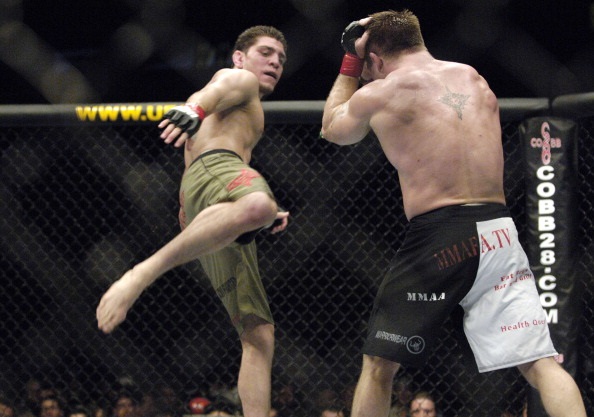 bad news was that he was returning against rising star Georges St-Pierre, who stopped Sherk for the first time in their UFC 56 bout in November of 2005 (watch St-Pierre vs. Sherk)

But after rebounding with a three round win over Nick Diaz, Sherk got the opportunity he was waiting for when the UFC reinstated the lightweight division. The 5-foot-6 Sherk was always better suited for 155 pounds, and in his first fight in his new weight class on October 14, 2006, he won a five round unanimous decision over Kenny Florian to win the vacant lightweight crown. At long last, Sean Sherk was a world champion.

Sherk defended his title once against Hermes Franca, decisioning the Brazilian at UFC 73 in July of 2007, (watch Sherk vs. Franca) but he was  stripped of the belt after the fight when the California State Athletic Commission announced that he had tested positive for the steroid nandrolone. Sherk vehemently denied using performance enhancing drugs and vigorously appealed his suspension. 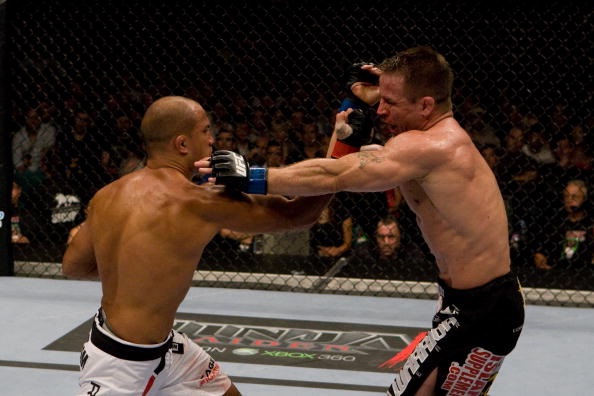 “The toughest part of this was the fact that I didn’t do it,” said Sherk in 2008.  “I tried to plead my case and I was pleading my case to deaf ears.  That was the hardest part about the whole thing, not being able to plead my case properly and not being able to get this thing overturned for something I didn’t do.  I think with the evidence that I supplied the commission, it kinda speaks for itself.  I felt like I did have a lot of evidence supporting my innocence and we did point out a lot of mistakes that they made on top of that.  But it’s out of our hands.”

Sherk’s suspension was eventually reduced to six months, and he returned in May of 2008 but lost in a title fight against BJ Penn (watch Penn vs. Sherk). Sherk went on to win two of his last three bouts, with the only loss coming to future 155-pound champ Frankie Edgar. The wins, over Tyson Griffin (watch Sherk vs. Griffin) and Evan Dunham (watch Sherk vs. Dunham), both earned Fight of the Night honors, a fitting epitaph for an athlete who always showed up in shape and determined to fight and win.

Yet the funny thing is, Sherk never felt like he got the respect he deserved, saying before the Dunham fight, “I’m like the Rodney Dangerfield of mixed martial arts and it’s kinda crazy. I bust 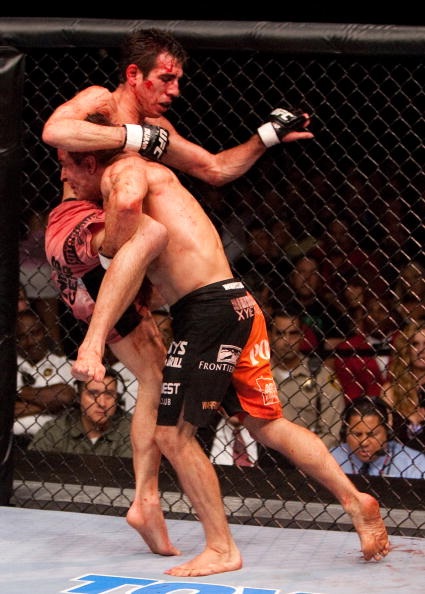 my ass and everyone knows how hard I work, what I’ve accomplished and what I put into this. It’s no secret. I’ve been very verbal about it, everyone’s seen my All-Access and my youtube videos and my diet and training, and I’m right on the money with that stuff because if I’m not doing everything I can to win a fight, then I’m only cheating myself and I’m not gonna do that. I put everything mentally and physically that I can into this, and I put everything on the line. I wear my heart on my sleeve and I’m out there for a fight. I’ve beaten 10 to 12 guys who have been ranked Top Ten in the world over the years, I fought for world titles in two different weight classes, won a world title, and I’ve accomplished a lot, but people don’t give me any respect for that. And that’s fine because I’m still thriving for that respect just like I was ten years ago. That’s what gets me out of bed in the morning and that’s what makes me want to work my butt off. If people don’t want to respect me, that’s fine; that just motivates me.”

Sean Sherk, you earned your respect, and you did it the hard way. Now it’s time to enjoy retirement.