Sean Pierson: Each Fight is a New Beginning

"When the opportunity presents itself I want to get extremely aggressive and go in for the finish." - Sean Pierson 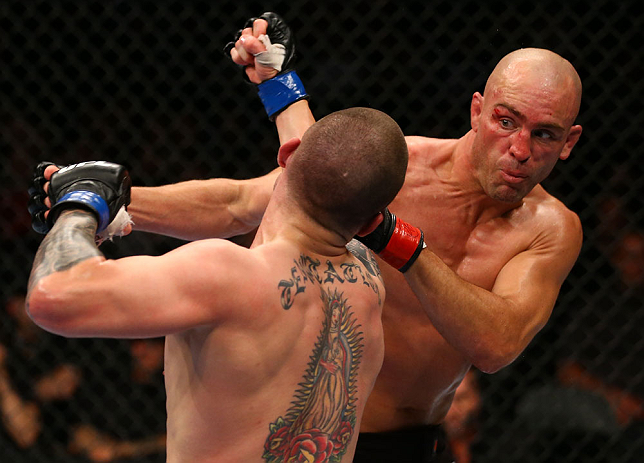 There came a point when Sean Pierson had enough of the fight business.

To be clear, it wasn’t the first time “The Punisher” contemplated walking away from his livelihood. At one time Pierson was an older fighter lost in the shuffle of a young person’s game, plodding through the independent circuit with thoughts that the Ultimate Fighting Championship was a mere pipe dream - and others telling him he wasn’t going to make it.

Pierson persevered until eventually becoming a Zuffa fighter, but it was a year ago when he nearly decided he was through. Days before a scheduled match with Jake Hecht at UFC on FX 3, Pierson was stressed and at a crossroads. He had twice blown his chance to score wins over prominent opponents Jake Ellenberger and Dong-Hyun Kim. As a younger fighter, Pierson felt like Superman who could do whatever he wanted without considering the long-term consequences. He walked around with a six pack that remained firm even after consuming meals from McDonald’s. Life was good. Pierson was in pristine shape and it was going to be like that forever.

Alas, Pierson was three months into his 36th year of existence and wondering how much he had left to give. He was a devoted family man, and the more he settled into life as a father, the more stressful the sport became when the losses - especially the high-profile ones - began to mount.

“It was definitely a thought in my head,” said Pierson in advance of facing Kenny Robertson at UFC 161 on June 15 in Winnipeg, Manitoba, Canada. “It was one of those things where I never really worried about my family before, about my well being, and it sort of scared me. My family’s been super supportive. My wife always saying you don’t need to quit, but all of a sudden I was stressing over things that I never stressed over before and it got to me before that fight.”

The second-oldest UFC welterweight behind Mike Pyle, Pierson is a realist. He endured a four-year layoff from MMA (2003-2007) to start a family. When he returned, Pierson went 5-1 and in 2012 had a ticket to enter Bellator’s welterweight tournament before pulling out with a knee injury. Once on the doorstep of becoming a Toronto police officer, Pierson was denied that career path thanks to his then secondary career as a fighter along with the nickname “Pimp Daddy.”

Despite the trials, Pierson was a UFC fighter, but close to the edge and evaluating his life at age 37. Then came a heart-to-heart with his boxing coach, Ryan Grant, who reinforced the fact that Pierson was given an opportunity of a lifetime as “an older dog competing with the young kids.”

You have so much more to offer, Grant implored. The sport has featured some late bloomers. Shane Carwin became the interim UFC heavyweight champion at age 35. Mike Thomas Brown was a relative unknown before he shocked the MMA world with his knockout of Urijah Faber to become WEC featherweight champion at the age of 33. And even though he was an established superstar, Randy Couture still surprised many when he won his fifth UFC title at 43 years old.

Think about it, Grant pleaded, long and hard. You’ve traveled down an onerous path to make it to the Zuffa ranks. This remains your time, he urged, now go out there and take it.

“I told him to do your thing and showcase your skills,” Grant said. “You’ve been doing this too [bleeping] long to throw it to the side. I won’t let you throw this to the side unless you’re trying.

“You forget sometimes that fighters are people. You need that reassurance that, ‘Yeah, maybe I can hang with the freakin’ top guys.’ You know what to do with certain guys. It’s those types of reoccurring things you just have to not really keep telling him, but let him know before you want him to back it up and put it in the show.”

Frustrated, down on himself and doubting himself, Pierson used the shot of confidence to defeat Hecht and win his next fight over Lance Benoist, both by unanimous decision. The big break that got him into the UFC, when he replaced an injured T.J. Waldburger to face Matt Riddle at UFC 124, did not pass him by after all.

“Maybe it was a good thing,” Pierson said of the trepidation that briefly consumed him and blurred his career path. “Maybe it put a healthy fear back in me saying you have to win these fights.”

Ironically, Pierson was to face Waldberger at UFC 161 before Robertson stepped in for him when the Texan suffered an injury. Re-calibrated, refocused and recharged,  Pierson is going in for the kill. Seven times on the independent circuit he earned knockout or stoppage victories, but in the UFC, the thrill of the finish has eluded the Punisher. If he can take control of this fight like he reclaimed control of his career, that’s going to change.

“It’s not a matter of people questioning me or me questioning myself, I know I belong in here,” Pierson said. “In my last two fights, both fights I had opportunities where I should have went in for the kill and for whatever reason I missed it. I plan on making that little change for this fight. When the opportunity presents itself I want to get extremely aggressive and go in for the finish.”

Confident those two straight wins solidified his place in the UFC, Pierson has let go of the emotions that caused worry and angst. Unlike the days of his youth when he’d try to lift like a bodybuilder and wrestle two or three times a day, Pierson is training smarter and more efficiently. Instead of wasting his energy, he’s listening when his body tells him no more. Mentally, he’s reduced the amount of time watching footage of upcoming opponents, leaving that to his coaches. The more he watched, the more it got into his head to where he started doubting what he should be doing and worrying about what his opponent was doing.

“It’s always great to be wary of your opponent’s tendencies and skills, but, for me, if I watch them too much, too often, I’m watching out for their something instead of doing my own something,” Pierson said.

The youngest in his boxing family, Ryan Grant was an up-and-coming fighter out of Montreal whose career was curtailed in 1998 by hand injuries. The head trainer and coach of Grant’s MMA gym in Toronto, Grant has witnessed Pierson’s evolution from a pug with the “a mentality of the dude from down the block that will kick your ass,” to a mature, well-rounded warrior who successfully implemented boxing techniques during his win over Riddle in December 2010.

“Now that he’s older, and a parent and in the big leagues, he started to respect the craft a lot more than just being the brute, tough kid that he was,” Grant said. “He was always a dedicated wrestler, but now respecting it with the other disciplines and being into the big show, he started to get a grasp of things a lot better.”

Pierson was ready for his next test in the form of Ellenberger, a future UFC title contender and a replacement for the injured Brian Foster three weeks before UFC 129, but he was knocked out 2:41 into the first round. Getting caught happens to the best of them, but Pierson chided himself over the results of the next fight, for not taking the initiative in a unanimous decision loss to Kim at UFC 141. He was so worried about what Kim could do that he stopped focusing on his own capabilities and failed to counter with his own strong ground game. All those hours of watching tape got into his head for the wrong reasons, for too much advice and studying killed his chances on that evening.

“I had no strategy to start, and Dong-Hyun had a different strategy than we assumed,” Pierson said. “I was trying to go for the same thing and should have been more adaptable with more confidence in other parts of his game.

“I shouldn’t have been so, I don’t want to say the word scared, but I didn’t want to grapple too much with him. I probably should have tried for some takedowns in that fight.”

Pierson lost that battle, but the Punisher has since impressed those more important, himself and his family. Each fight is new beginning, and Robertson is the latest puzzle that Pierson will need to solve to at least position himself for a glorious run as a graybeard. It’s unknown if the words Sean Pierson and championship contender will ever cross paths under a marquee, but when the day comes that Pierson walks away, it won’t be due to quitting. His mind will be clear with time for reflection and filled with enough peace to pursue whatever’s next.

“I don’t know what I want to do. I have all these ideas in my head, but I’m still active in the UFC,” Pierson said. “I know that I’m 37, so I’m not being naive thinking I have 20 fights left. But I want to just enjoy my time and think about what other branches I can extend to.”