Armed With Next-Level Confidence And A Champion's Mindset, Sean O'Malley Is Looking To Bounce Back From His Loss To Marlon Vera Against Thomas Almeida At UFC 260: Miocic vs Ngannou
By McKenzie Pavacich, on Twitter @mpavacich_ • Mar. 25, 2021

In the eight months since we last saw Sean O’Malley inside the Octagon, a few things in his life have changed -- the biggest being that he’s now the father to a healthy baby girl.

“Last year, Dany told me she was pregnant right before I fought José Quiñónez, and then I fought three times, and then Elena was here in November,” the new father said.

But to very little surprise, despite suffering his first loss of his professional career last August, O’Malley’s confidence hasn’t changed one bit.

She reminds me that life is simple. It's love. It's hard to explain, it's just love."@SugaSeanMMA details what it's like to be a father, his upcoming fight with Thomas Almeida and more 🔊⬆️

“I think the reason I claim to be undefeated, or mentally undefeated, is because I don’t feel like I was beat by his skills,” O’Malley said of his bout against Marlon Vera at UFC 252, which ended 20 seconds shy of a full first round. “I truly don’t believe he beat me because he was the better fighter that night.”

It’s a statement that’s caused a variety of reactions across the board, but “Sugar” has made it clear that he’s “not too worried about it,” adding that his confidence is simply logical, not cocky or unsportsmanlike.

“It comes from the work; I’ve been doing this for 10 years now,” the 26-year-old said. “I’ve had a lot of fights, and each fight camp I learn a little bit more. The confidence comes from the preparation I’ve put in.”

As he gears up for his 14th professional fight, the bantamweight has his work cut out for him as he prepares for another true test in Thomas Almeida. 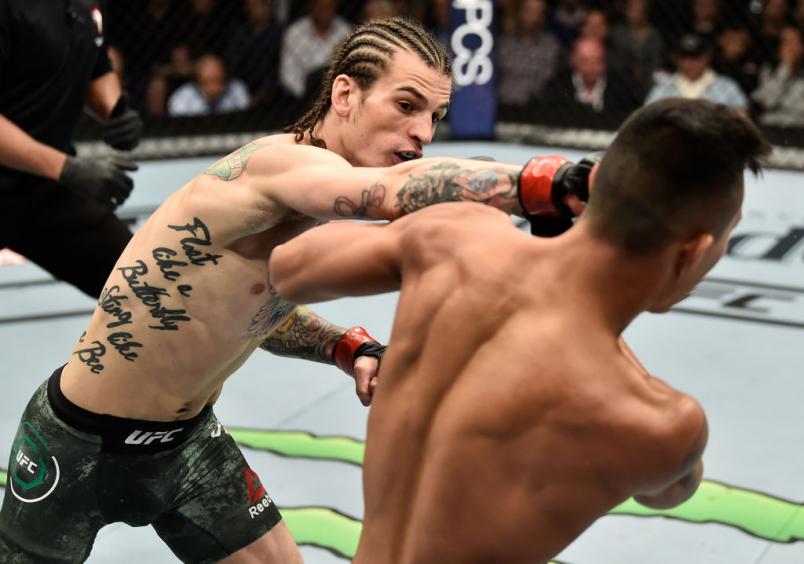 “In fight camps, you know you’ve got a test coming up. You study and prepare,” O’Malley explained. “I get to test my skills against his skills, and whoever has better skills that night passes the test. I’m trying to pass this test with flying colors.”

Comparing his first-round knockout performance over Eddie Wineland at UFC 250 last year to his predictions for this matchup, O’Malley believes he’ll actually have to put his technical skills to the test against Almeida instead of relying on sheer knockout power.

“What excites me most about this matchup is that he’s a good fighter,” O’Malley said. “Going into this fight, this dude’s technical. I’m going to have to be really calculated and set up my shots to get to his chin. He’s got good defense, good offense, and he gets me excited. It’s a tough fight and I think it’s gonna make putting his lights out even better.”

It’s a statement that O’Malley, who has three fight night bonuses in his four pay-per-view showings, is intending to deliver against the Brazilian, who will be making the walk for his 27th professional fight.

“Thomas is tough. I’m gonna beat his body down, I’m gonna hurt him and then I’m gonna knock his lights out; same way I took out Eddie,” O’Malley predicted.

The Brazilian Jiu-Jitsu purple belt carries with him a type of confidence that comes not only from fight camp preparation and a decade of experience, but also from the work that gets put in every single day.

“I live the life of a world champion already. I’m not going to become a world champion and then think ‘Oh, I’m a champ now, I have to live like one.’ I live like I’m a champ anyway,” the product of Glendale, Arizona’s MMA Lab explained. “I train hard, I have a nutritionist, I get my blood tested so I’m doing the right things, I’m eating the right foods, and I’m training with the best guys in the world.”

The @SugaSeanMMA Show is back this Saturday at #UFC260! pic.twitter.com/wja4oV0H9i

Armed with the right people, an impenetrable mindset and the newly found motivation of providing for his family, now grown to a party of three, O’Malley’s goals for this year are pretty simple.

“I plan on making a million dollars,” he said. “Last year was close. I know fighting is crazy and anything can happen, so I try not to make too many plans, but I had big plans after Chito. I had plans. Right now, I don’t have anything. It’s Thomas Almeida, March 27th, Saturday night, and that’s it.”

While the exact path to $1 million in 2021 is unknown for O’Malley, there’s no doubt it won’t be lacking in entertainment, beginning Saturday night.