"Sugar" Sean O'Malley Is Learning How To Handle The Spotlight As He Rises In The Bantamweight Division
By Zac Pacleb, on Twitter @ZacPacleb • Jul. 5, 2021

So often, the trajectory for rising stars follows a familiar pattern. They burst onto the scene and are hailed as the Next Big Thing, an indefinite period filled with flowers and adulation. Soon enough though, the pushback begins. Sometimes it begins as a rumble, sometimes it’s an avalanche. It’s at this point the once-shiny new toy must respond, and this is often the moment those ingrained in the sport can tell whether this once-promising prospect is the real deal or something less than. That is where O’Malley’s career was heading into his fight against Thomas Almeida at UFC 260.

Since earning a contract on Dana White’s Contender Series, Sean O’Malley demanded the spotlight. His flashy striking style and aura of confidence exuded the ever-elusive “it factor,” but that shine faded when Marlon “Chito” Vera connected with a leg kick that led to O’Malley suffering from drop foot as well as his first professional loss and opening the floodgates for all the pushback – fair and unfair – to come careening toward the 26-year-old.

“Literally every comment on my Instagram, on my YouTube was, ‘Weak ankles. Kick him in the leg. That’s what you got to do,’” O’Malley told UFC.com. “What happened was a complete freak accident, and obviously, I knew that, but then you get the fans and the doubters and the haters.”

Granted, O’Malley’s choice to brush the loss off as a non-event and continue to call himself “undefeated” bristled feathers, and when he stepped into the Octagon to face Almeida, questions equaled the excitement in terms of how O’Malley would respond.

In his always-appealing style, O’Malley was locked-in from the opening bell, piecing up Almeida and connecting with a head kick and overhand left that floored the Brazilian. Thinking he earned a walk-off knockout a la his win over Eddie Wineland, O’Malley walked away and ultimately allowed Almeida to recover.

O’Malley went ahead and continued his striking clinic for the rest of the fight and did eventually earn an emphatic third-round knockout, sending a clear message to anyone who left his hype train that they’d made an ill-advised decision.

“It felt good to be able to go three rounds because I’ve been working with Brandon Harris on my strength and conditioning for the last couple years, but we haven’t gone out of the first round, so I trust it,” O’Malley said. “I know what it is. I know I have the cardio. I do it in sparring, I do it in training, but going out there and being able to go three rounds and prove to myself that what I’m doing is right, it just confirmed what I already knew. To go out there and go the three rounds – I wasn’t tired, I could’ve gone five that night – felt really good. It made me more confident.” 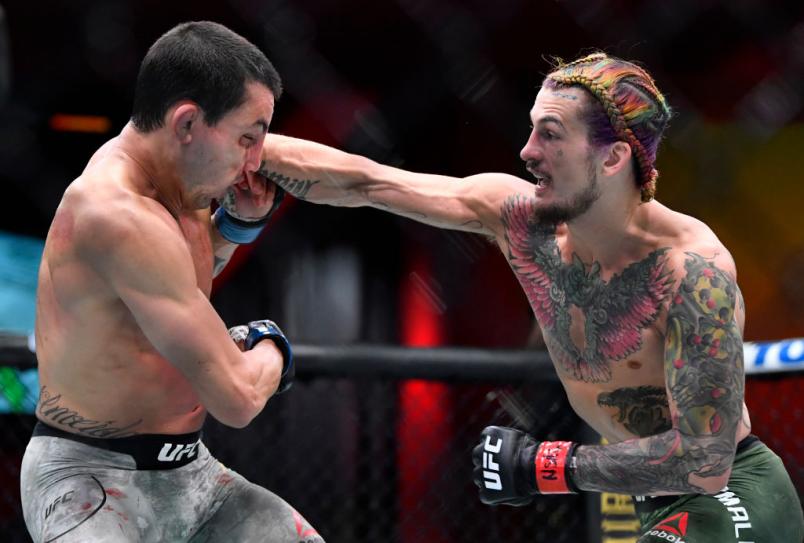 Sean O'Malley punches Thomas Almeida of Brazil in their bantamweight fight during the UFC 260 event at UFC APEX on March 27, 2021 in Las Vegas, Nevada. (Photo by Chris Unger/Zuffa LLC)

Sean O'Malley punches Thomas Almeida of Brazil in their bantamweight fight during the UFC 260 event at UFC APEX on March 27, 2021 in Las Vegas, Nevada. (Photo by Chris Unger/Zuffa LLC)

For as big of a game as O’Malley talks, the win seemed particularly cathartic – perhaps more so than his win over Jose Quinonez after two years out of competition. Immediately after knocking Almeida out, O’Malley sarcastically yelled, “All you need to do is kick him in the ankles,” in reference to his loss to Vera and the questions about his durability that circulated afterward.

“It was a masterful performance,” O’Malley said. “I didn’t get hit, and I hit (Almeida) a lot. That’s always the goal. I don’t necessarily hit hard. I mean, I have one-punch knockout power, but I think that comes mostly from when I have people hurt. Hitting them over and over and over and over, and then one drops them, so it just shows how tough Thomas was because a lot of people, I knock out earlier, and he stuck around until the third round. I thought it was a beautiful performance.”

A Part Of The Show

O’Malley leaned into denying the reality of his loss to Vera, going so far as to hold up a ‘0’ when Bruce Buffer read his won-loss record. It annoyed some and amused others, and it’s a bit he has continued since.

Having received a pretty big promotional push from the UFC since his debut, O’Malley has gone through the young star ringer. On the biggest stage, every action – successes, mistakes, etc. – are louder and seem more dramatic, but he seems to have ingratiated himself with his fan base and revealed more of himself along the way.

What is definitely understood about O’Malley is the attractive nature of his striking talent. When he is in his rhythm, he is constantly feinting, switching stances, throwing big techniques and landing beautiful combinations.

It’s why O’Malley enjoys watching his fights back, and it’s that part of his game he believes kind of flies over the casual fan’s head. He also believes he’s relatively tricky on the ground, having fallen in love with jiu jitsu in his two years away from the Octagon, but striking remains the bread-and-butter.

“Unless you’re in the sport deep and you understand, you won’t get some of the stuff that I do,” he said. “It’s just looked over because sometimes it’s so fast. Most of the time, I watch my fights or my rounds, I watch a lot of the combinations and stuff in slow motion just because it’s so fast to really break it down. I just think I have the trickiest striking in the UFC…I have a lot of tricks, but I think I do have the best striking in the UFC.”

Making A Home In Arizona

A new element in O’Malley’s life leading into the Almeida bout was his status as a father. He and his longtime partner Danya welcomed a daughter, Elena, in late-2020.

“It’s a long trip on life,” O’Malley said. “It’s weird. Every day, literally, you can see her get bigger every day. Dany just showed me this outfit, and I’m like, ‘That’s not going to fit her until she’s like five,’ and we threw it on, and it fits her perfectly, so it’s weird to see how fast they grow. She has a tooth popping through. She’s a character.”

While the responsibility of raising another human being is a time and labor-intensive task, O’Malley heaps praise on Dany. He said he’s able to still get plenty of rest between training sessions, and to get the days started, he enjoys the moments with his daughter after his 10-minute morning meditation.

He admits he needs to be a little “selfish” when it comes to sleeping so he can reap the benefits of hard training sessions, but so far, it seems like the two have a system that works well for all involved.

“Without her, then it would be way harder,” O’Malley said. “It would be tough, but she makes it easy. She does my meals, she preps my meals, obviously she’s a great mom, and she doesn’t work as much when I’m in fight camp. She works a couple days a week. She does hair, she has her own schedule, so she books herself. She takes care of me and the baby in camp, so I’m definitely spoiled.”

Although the common narrative that floats around a new parent is a sort of driving force in their career, that’s not really the case for O’Malley. He said he thought about how it would impact him and his drive, but when it came down to it, not a lot changed in that department. 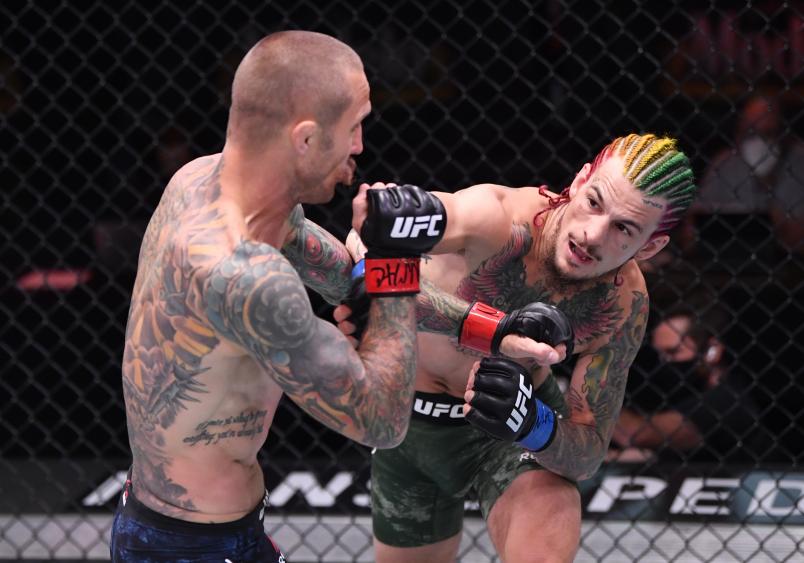 “I’ve never not been motivated,” he said. “I’m 100 percent motivated to train correct, go out there and win, and then when I had a baby, nothing changed. I don’t think I could’ve gotten more motivated than I already was, but it’s fun. It’s sweet.”

Fatherhood is just another aspect of O’Malley’s life that further engrains him into the fabric of his adopted home state of Arizona. After moving to the state at 19 years old to train, O’Malley and his growing family is settling into the greater Phoenix area.

O’Malley opted to live in Peoria – a much slower-paced area in the city - instead of moving into more popular areas like Scottsdale or Downtown Phoenix. O’Malley said he doesn’t really do too much outside of training and streaming on Twitch, and he joked that if somebody asks him what they should do in town, he just tells them to go to In-n-Out. The decision to live in Peoria, though, was mainly to be closer to his coach Tim Welch’s gym, but the distance from the various temptations for a kid in his early-20s wasn’t a bad perk either.

Now, O’Malley has a full Octagon and setup in his garage to train out of. It’s where he began camp for his scheduled bout at UFC 264, originally booked against UFC veteran Louis Smolka.

O’Malley was interested in Smolka, an all-action fighter, and hoped he could become the first person to knock out the Hawaiian. However, Smolka pulled out of the bout due to injury, and several bantamweights volunteered to step into the slot via social media. Soon enough, O’Malley had his new foe in Kris Moutinho, a UFC debutant out of Massachusetts. It’s not exactly the higher-profile matchup some hoped to see O’Malley in after his last fight but, at the end of the day, it’s another fight and another opportunity to add to his ever-growing highlight reel.

Those big performances in the spotlight are what helped O’Malley move a lot of his family to Arizona with him and also what puts him under high levels of scrutiny when he couldn’t live up to expectations. At UFC 264, when O’Malley steps into the Octagon, another episode of The Suga Show hits the airwaves, and it’s the culmination of a young star’s career hitting its midpoint, one that seems like it has a ways to go before hitting its ceiling.

“None of this was guaranteed,” O’Malley said. “In my head, it was going to happen. I did see all this happening. I did see me getting into the UFC. I did see me becoming a star, and it’s all happening right now. Recently, I’ve been looking back because it’s been 10 years since I started training, and it is crazy to see how all this has happened. I kinda manifested it in a way, but it comes down to the hard work…It was a grind.”