Sean O'Malley Has Been Electric Every Step Of The Way

With one of the best Octagon interviews in UFC history and one of the best outings on Dana White’s Contender Series, what was Sean O’Malley able to do in his time at LFA?

“Sugar” Sean O’Malley cut his teeth with a whopping nine amateur fights in under two years. As an amateur, O’Malley had a 7-2 record and an urge to live and die by the submission. Of his nine fights, O’Malley won by way of tap out three times and both of his losses were the result of submissions. With only two knockouts to his name as an amateur, O’Malley came into his own the second he graduated to the professional ranks.

O’Malley began lighting up Big Sky Country with three KOs in his first five fights. The reformed fighter made a trip to North Dakota for his sixth professional bout and took care of business with another show stopping knockout just over halfway into the first round.

O’Malley still looks back at the knockout with as much pride today as he did the day it happened. While it was one of the easiest on the eyes, the KO finish catapulted his career one step closer to The Show when it caught the attention of the LFA.

“I have a really good foundation of basics so I can get creative,” O’Malley said. “I can go out and do the stuff I like to do. I’m out there trying to win 100% and not necessarily trying to be exciting; it’s just that a lot of the stuff I work on is exciting.”

It was that exact concoction of flash and skill that led him out of Montana and down to LFA for what he assumed would be his home for another couple years. 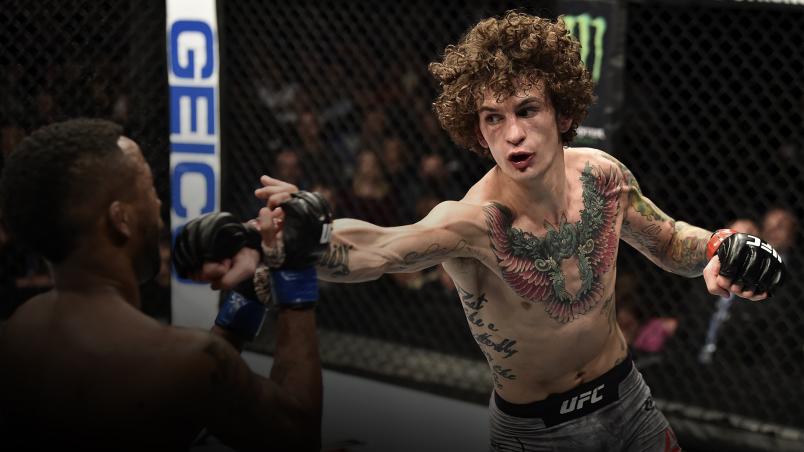 O’Malley was pitted against David “Bad News” Nuzzo, an 8-1 fighter who was coming off a strong showing at World Series of Fighting. O’Malley didn’t see him as another tough opponent; he immediately saw him as “a good win to have” even before they stepped inside the cage.

Preview Every Fight On UFC 269: Oliveira vs Poirier

A stress-free training camp paid off significantly for “Sugar.” From the opening bell to O’Malley’s patented backflip celebration, it barely took two minutes for the 22-year-old to land a standout KO that shot him onto the radar of the UFC.

“I would go as far as saying I had the most impressive knockout in LFA,” O’Malley said. “It doesn’t get much better than that. Right after, I got on the mic and said I expected that. I was working on that exact same kick on the mitts that same week. It was the same right head kick, get him going towards the other way to the spinning head kick. It just happened to work out perfectly.”

Nuzzo took a two year break before competing again and O’Malley was showing the word what Dana White’s Contender Series was all about after just a two-month break.

While O’Malley wasn’t necessarily expecting a shot at DWCS next, the fact that a platform such as LFA jumped him up to the next level came as no surprise.

“I’m not super familiar with other organizations, but every weekend that there’s a fight there’s at least a couple people from LFA on there,” O’Malley said. “Right before that fight I had a sweet ass knockout in North Dakota. I thought it was a really sweet knockout and that didn’t really get much attention because it was in a smaller show in North Dakota, but yeah, it being on that LFA card helped make it go viral.”

Watch O'Malley's Fights On LFA, DWCS & In The UFC On UFC Fight Pass

For anybody sleeping on O’Malley or overlooking his clout inside the Octagon, he’s got a very clear message.

“I think a lot of people in the division are underestimating me,” O’Malley said. “I feel like they think I’m the hype train, but my whole life is dedicated to training, recovering and doing it all again the next day.”

See for yourself why hype surrounds O’Malley. Whether it’s going to war on a broken foot in the Octagon, giving DWCS the most viewed fight in the show’s history on two months’ rest or landing a “too good to be true” head kick KO at LFA, O’Malley always gives the crowd exactly the show they paid for.

Check out (one of) the most exciting KOs of Sean O’Malley’s career NOW! ONLY on UFC FIGHT PASS!