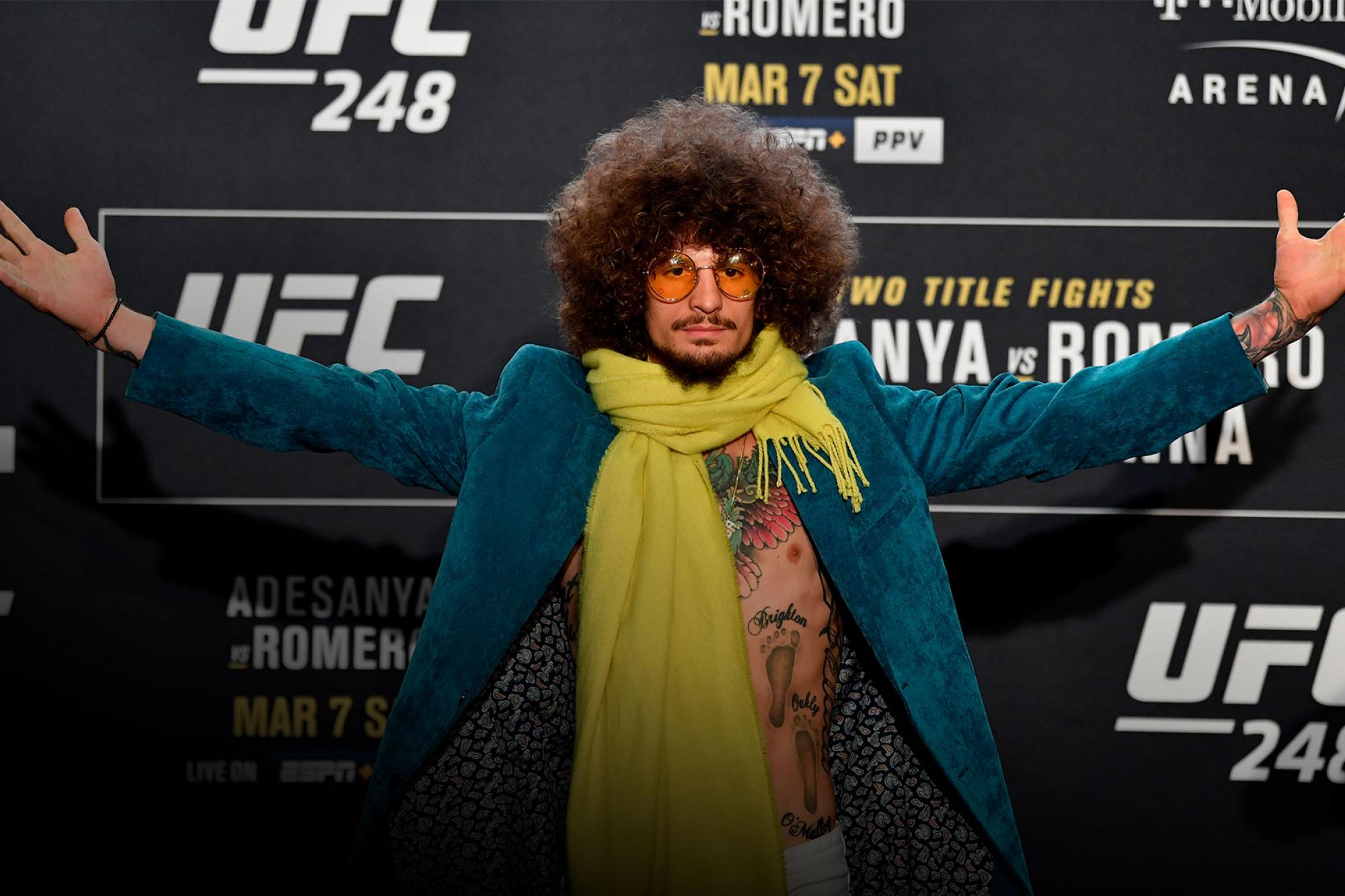 Sean O'Malley Fighting To Be The Best

Rising star Sean O'Malley isn't in the fight game for the fame. His motives are simple: he wants to be the best bantamweight of all time
By E. Spencer Kyte, on Twitter @SpencerKyte • Jun. 4, 2020

It was obvious to UFC fans from the second Sean O’Malley sparked Alfred Khashakyan with a clean right hand to end their clash during the first season of the Contender Series that “Sugar” had the potential to be something special.

Several years earlier, it was obvious to the emerging bantamweight standout’s first head coach, Johnny Aho, who imbued his young charge with the confidence that continues to course through his system today as the undefeated rising star readies for the toughest test of his career against Eddie Wineland this weekend at UFC 250.

“I’m from Helena, Montana and my first MMA coach, Johnny Aho, he had this confidence in me that no other coach has had in me,” said O’Malley, who ended a two-year absence in March with a first-round stoppage victory over Jose Quinonez. “He had this confidence, this belief that whomever I was fighting, I was going to knock them out, and he gave me that confidence.”

Since those early days logging fights on the amateur circuit in his home state, through his move to Glendale, Arizona as a 19-year-old with lofty goals, and into his days as one of the top prospects in the UFC, O’Malley’s confidence has only continued to grow. It pours out of him when he’s in front of the camera, either in the days building up to fight night when his style and personality are on full display or when he gears down and goes to battle, his mop of curls replaced by braids, but his self-belief still evident to everyone watching.

His hands dangle at the end of his long, skinny arms, far from the standard defensive posture coaches frequently encourage and fans are accustomed to seeing. He teases opponents with his posture and positioning, staying close enough to draw out punches while remaining far enough away to evade much of the incoming fire before quickly snapping out kicks and punches of his own.

But what doesn’t show up on screen as he dances around the Octagon, waiting for the perfect moment to strike is the amount of time and effort that has gone into perfecting this style and transforming himself from a hopeful amateur into a burgeoning superstar with aspirations of ruling the bantamweight division and all the markings of someone capable of making that happen.

“I moved to Arizona when I was 19 and carried on those amateur fights,” said O’Malley, who followed fellow Montana native and his lead cornerman Tim Welch to The MMA Lab, where he continued his amateur career before turning pro in 2015. “When I got to The Lab, I started getting beat up and I knew that if I kept training, I was going to be able to beat those guys that were beating me up because I wanted it more.

“I wasn’t missing any practices. I wasn’t going out partying; I still don’t party. I’m in this to be the best bantamweight ever; I’m not in this to just be famous.”

Most everyone wants to be the best ever, but what differentiates the dreamers from those with the potential to actually reach those dynamic goals is the effort they put in when no one is looking and their ability to maintain that focus once the attention starts to come.

Thus far, O’Malley has passed those tests with flying colors.

After getting everyone hooked on “The Sugar Show” with his breakout performance on the Contender Series, the charismatic and engaging bantamweight continued making waves both inside and outside of the cage. His profile exploded as he showcased his personality on social media and during fight week festivities, including crashing open workouts ahead of his UFC 222 bout with Andre Soukhamthath.

His Instagram blew up. He became a media darling and backed it up with victories over Terrion Ware and Soukhamthath, pushing his record to 10-0 and landing atop ESPN’s list of the Top 25 MMA Prospects under 25.

But the two years between his win over Soukhamthath and his triumphant return this past March against Quinonez were filled with challenges, including multiple surgeries and a prolonged anti-doping violation case ultimately put to rest when there was no evidence found of intentional use. Rather than let it halt his momentum or derail him entirely, O’Malley used the time away as an opportunity to improve every facet of his game.

He paused, searching for the right way to sum it all up.

“I got so much better mentally, physically, skill-wise, emotion-wise that it was really a blessing.”

It showed in his performance against Quinonez, a consistent tough out in the bantamweight division who entered having won five of his previous six bouts.

He’d filled out his wiry frame, adding functional size along with a couple more tattoos, and his movements were crisper. The confidence was still apparent, but so too was an increased sharpness and focus, like he understood that his style is naturally entertaining and something memorable was going to eventually happen, so there was no need to force the issue or overextend.

He picked his spots from the outside and took his time, eventually stinging Quinonez with a right hand on the way in just before the three-minute mark of the opening round. Less than 10 seconds later, the fight was over and any questions about O’Malley being rusty or over-hyped had been answered emphatically.

“I think at this point I’ve proven I’m not a ‘hype train,’ but I don’t mind that title because Conor McGregor was a hype train; Israel Adesanya was a hype train,” said the undefeated 25-year-old rising star. “So if that’s what hype trains are, yeah — I want to be a hype train.

“I’m not in this sport to get paid a little bit of money and retire,” he continued. “I’m in this sport to be the greatest bantamweight of all-time and eventually move up to featherweight because that’s kind of where the sport is going; you’ve got to have both.

“With my body type, that’s going to be perfect for me; I’ll be a good-sized featherweight when it’s time. But right now, I’m trying to be the best bantamweight that has ever lived.”

This weekend’s pairing with Wineland is another crucial step in that journey, as the veteran stalwart is the most experienced and seasoned opponent O’Malley has faced to date.

The inaugural bantamweight champion in WEC history, the 35-year-old Wineland has spent his entire 38-fight career competing in the 135-pound weight class, having shared the cage with the likes of Antonio Banuelos, Urijah Faber, Scott Jorgensen, Brad Pickett and Takeya Mizugaki, as well as challenging for championship gold against Renan Barao at UFC 165.

Last time out, the battle-tested veteran showed that his hands remain sharp and powerful as he pieced up Grigory Popov, spoiling the newcomer’s UFC debut and halting his 10-fight winning streak in the process.

“He’s an extremely dangerous opponent and I respect him, plus I know that with those little gloves, anything can happen,” O’Malley said of his date with Wineland on Saturday. “But I plan on going in there, knocking him out, and not getting hit; that’s how high-level skilled I am.

But while he’s excited to tackle this latest step up in competition and admits the division is wide open at the moment, O’Malley has no interest in rushing things as he looks to make his championship dreams a reality.

“I’m in a perfect spot, fighting the exact opponent I’m supposed to be fighting,” he added.

He may have been shot out of a cannon upon arrival and there are surely those who want to see him “make up for lost time” now that he’s back competing, but O’Malley is playing the long game.

He wants to be the best bantamweight of all-time but, for now, he’s focused on Wineland; on winning another fight and adding another finish to his highlight reel; and on taking things one step at a time.

“I’m not in a hurry to rush my career,” O’Malley reiterated. “When I’m champion, I’m going to be champion for a long time. I want to defend the belt a lot and I want to be in the talks to be ‘The G.O.A.T.’ someday.

“It’s an exciting time. We’ll see how everything plays out.”