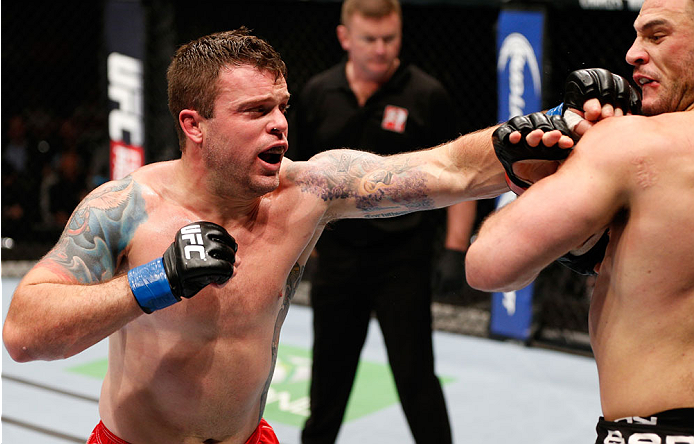 Sean O’Connell thought he had things figured out. With UFC President Dana White about to appear on the Utah product’s sports talk radio show before the second bout between Cain Velasquez and Junior Dos Santos in late-2012, “The Real OC” was going to make his move.

“I thought ‘I just need to have fun with this,’” he recalled, knowing that after doing interview after interview, White needed a break from the usual questions. O’Connell, a pro mixed martial artist with a 13-4 record at the time, knew just what to do.

He was going to ask for a job.

“He (White) is a guy that I think appreciates if you put yourself on the map in a weird way or put yourself out there by being brash, so I said ‘Hey, give me a shot.’”

White chuckled at first, but when O’Connell told him that he was serious, the UFC boss listened to his resume, which included a loss to Shane Primm in an Ultimate Fighter 8 elimination bout, and told him that they would talk after the show. They did, with White giving O’Connell the phone number of UFC matchmaker Joe Silva.

“Joe was completely unimpressed by the whole scenario,” he laughs. “All he said was ‘Can you fight?’”

The answer came back as affirmative, but Silva wasn’t offering a contract just yet. The exchange was damn good radio though.

“The audience loved it, my boss loved it, so it worked out on the radio side, but it didn’t necessarily do much for me on the fight side,” O’Connell said.

He continued to stay in touch with Silva, and after wins over Marvin Eastman and Markhaile Wedderburn, the light heavyweight prospect got a call to replace the injured Steve Bosse against Ryan Jimmo in April of last year. O’Connell was a UFC fighter, and though he lost that bout to the Canadian via first-round knockout, he had finally reached the place he had wanted to be in since he put on gloves. It was a long road filled with twists and turns, which makes one wonder why he would stick with it.

“I think everyone’s answer is a little bit different. For me, I’m unique in that I’ve got a day job that I really love,” O’Connell, who still hosts a show on ESPN700, said. “I want to take Joe Rogan’s job whenever he’s done with it, I want to take Jon Anik’s job, or if they add a third crew, it should be me. I really feel that way.”

Hope he’s not coming after me.

“Your job’s safe for now,” he laughs before continuing. “I’ve been doing it for a long time and I love my day job, but this is something I’ve been passionate about. I wanted to prove, basically only to myself, that I didn’t get into it just to be the guy who walks around and says ‘yeah, I’m a fighter.’ I want to prove to myself that I can compete at the highest level and win in the UFC. That’s one of the last things left on my young adult bucket list. I have to get a win in the UFC, and then maybe I’ll be able to grow up and settle down a little bit in life.”

O’Connell came close the last time around, losing a razor-thin split decision to Gian Villante in June, but even if he picks up a victory over TUF 19 finalist Matt Van Buren this Sunday in Boston, don’t expect him to get his hand raised then toss his gloves down in the Octagon and walk away from the sport. It’s just that his goals are a little different than most of his peers…for the moment.

“You’re not supposed to say this, but I’m not beating Jon Jones,” O’Connell said of the UFC light heavyweight champion. “I just watched him demolish an undefeated former Olympian (Daniel Cormier). I’m not chasing a UFC title; I’m chasing entertaining fights for UFC fans and to prove to myself that I can win at the highest level of the sport. Not everybody that’s in the NFL is Peyton Manning or Ray Lewis. There are plenty of guys who are on the roster and they made their name and made their money just being themselves and being guys who made it and they weren’t supposed to. I’m one of those guys. I’m self-aware enough and hopefully humble enough to know that’s who I am. I’m more of a realist, and I’m comfortable with the fact that I’m an entertaining fighter and I think people will say that they appreciate me for who I am. I might not ever be a top five guy, but I’m gonna compete, I’m gonna go fight hard and I’m gonna entertain people.”

But what happens with a win on Sunday, a win a couple months down the line and another and another. Will he move the goalposts a bit after that?

“That’s a hopeful possibility for me,” he said. “I believe wholeheartedly that I’m going to smash Matt Van Buren. I think I did beat Gian Villante and the judges saw it differently. That was a great fight and a fun fight, but I thought I did enough to win that fight. He (Villante) is a great dude, he was cool about it, his corner was so cool about the whole thing, and I think we all acknowledged that it was a fun fight. We got the bonus, we got a trip to New Zealand, and I was appreciative of the whole experience, but I was upset that a poor – in my mind – judges’ decision cost me my win bonus and, more importantly, job security in the UFC. That was upsetting to me, but I believe I beat Gian, I believe I’m gonna beat Matt Van Buren, and I think I can beat a lot of guys in the division. There are only really two or three that I look at and I’m like ‘damn, that’s terrifying.’ (Laughs) But the expectations can and do change, and they evolve for everyone.”

And when you look at O’Connell’s willingness to push the pace, his ability to knock people out, and an evolving overall game under the tutelage of one of the best minds in the sport in Jeremy Horn, it’s clear that the 31-year-old is going to be progressing and not regressing in the future. And Horn, a former UFC world title challenger, may be the key to the whole thing.

“It’s a big confidence boost for me knowing that if I get into a situation in a fight that I’ve never been in before, that’s something that he (Horn) has experienced or he’s seen, and then I’m flying on instruments. I’m doing whatever my computer in the corner – Jeremy Horn – tells me to do at that point. I just need to listen to him.”

“Guys like me, I’m constantly working on listening to Jeremy more and trusting more in what he says and fighting my animal, dumb urges to just plod forward and put my face in front of fists and listen to that guy more because he’s always guiding us in the right direction.”

That direction is up, and Sean O’Connell has his sights on it. In his own time of course.

“Five years ago, it was a crazy pipe dream for me to ever be where I’m at now, to get a chance in the UFC. I started winning fights and I said ‘I belong there, and it’s not if I can make it but when.’ But you’ve got to take the road one step at a time. That’s where I’m at right now, and I’m totally comfortable with it.”