Sean O'Connell: Making a Name for Himself 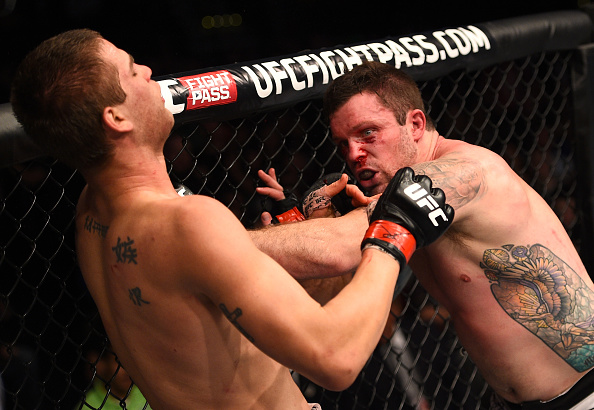 Sean O’Connell was a little taken aback recently when it was pointed out to him that the only fighters who have beaten his Fight Night Adelaide opponent, Anthony Perosh, in the last four years have had the first name Ryan. But O’Connell, a sportstalk radio host who is quick on his feet, recovered quickly.

“I’ll have to go forge a new birth certificate and add Ryan on there,” he laughed, and while the Utah product isn’t Ryan Bader or Ryan Jimmo, he’s doing a good job of making a name for himself in his own right, something back-to-back Fight of the Night bouts against Matt Van Buren and Gian Villante have certainly aided in.

There’s still some work to be done though.

“If you watch the (Fight Night Boston) post-fight presser, when (UFC President) Dana White announced the bonuses, he kept referring to our fight as the Van Buren fight,” O’Connell said. “Matt Van Buren was in the fight, but I won the fight. That’s the next big hurdle to overcome. It’s a nice little piece of motivation.”

That hunger is good, but you can rest assured that the UFC brass knows who “The Real OC” is, with proof being the new contract he got after stopping Van Buren in the third round in January. That hasn’t changed O’Connell’s attitude to succeed though.

“I think that puts me on a little bit more solid footing, but you can start back on the downward spiral if you don’t just keep winning,” he said. “So that’s the plan. You can’t rest on laurels in this sport at all, but I feel like I got them to like me a little bit.”

They like him enough that he’s on the main card Saturday night (Sunday Australian time) against dangerous veteran Perosh in what promises to be another exciting matchup for O’Connell, who is well aware what his 42-year-old opponent brings to the Octagon.

“He’s by far my toughest test to date,” the 16-6 O’Connell said. “People love to underestimate the guy because he’s old. I train with Jeremy Horn, who’s kind of in that age bracket, and I feel like I’m fighting my own trainer in this fight. Perosh has got a ton of jiu-jitsu, he’s fought some of the toughest guys in the world and he’s very, very difficult to stop. Yeah, he got knocked out by Ryan Jimmo, but Jimmo hits hard, okay? I’ve been knocked out by Ryan Jimmo too. So you can’t look at that and say ‘all I have to do is land one good one.’ He will take a beating. He will wear an ass whuppin’ and keep coming at you and if he gets on top of you, he’s dangerous. If you don’t let him get on top of you, he’s still dangerous, so this is by far my toughest test to date, I’m fighting in his country, so that’s always a motivation, and there’s a lot of reasons why people are going to tell you he should beat me and it’s probably me and my camp that thinks I’m the one to win this fight, and that’s fine.”

O’Connell has never let outside opinions creep into his mind or alter the path he’s on, and at 31, he’s not likely to change course. So as social media jabs often procure more of a fan base than real ones, this light heavyweight is sticking to his guns and letting his fighting do the marketing for him.

“In 2007 (when he turned pro), people wanted to hear what you had to say because of the fighter that you were,” he explains. “And recently, it’s been swapping over to people wanting to see you fight because of what you have to say. That’s not what this sport is about and that’s not what it should be about, and I hate it. It’s garbage, and all those guys are self-marketing geniuses; that’s great. Do what you can to make your money while you can because nothing’s guaranteed to any of us. But I can’t be that guy that sits here and plays a character and talks a bunch of garbage on anyone whose level I’m trying to get on. I want to be the guy that people tune in to hear what I have to say because they just watched me smash somebody in a fight.”

That may well be the perfect way for O’Connell to make a name for himself in the Octagon. And in a division that has suffered its share of hits lately, most notably the stripping of the 205-pound belt from Jon Jones when he was charged with leaving the scene of an accident involving personal injury in Albuquerque on April 26, the weight class could use a jolt of positive energy to help bring it back to where it used to stand as the sport’s glamour division.

“I think the light heavyweight division is kind of waiting for somebody to really jump up and be the next guy, even if it’s just the next exciting guy,” O’Connell said. “Everyone was so desperate to see Rampage (Jackson) get back into his fight against Fabio Maldonado (at UFC 186) because the light heavyweight division is just lacking some interesting personalities and interesting fighters right now. So there’s an opportunity to step in and put yourself in the conversation. It will take a while before anyone is talking about me as a title contender, which I’m fine with, but I think people want the heavyweights to be good and the division to be deep, and they want the same thing for the light heavyweights. It feels like there’s five or six guys everyone’s aware of and roots for and after that it’s a wide open pool.”

Get ready for Sean O’Connell to jump in that pool…feet first.