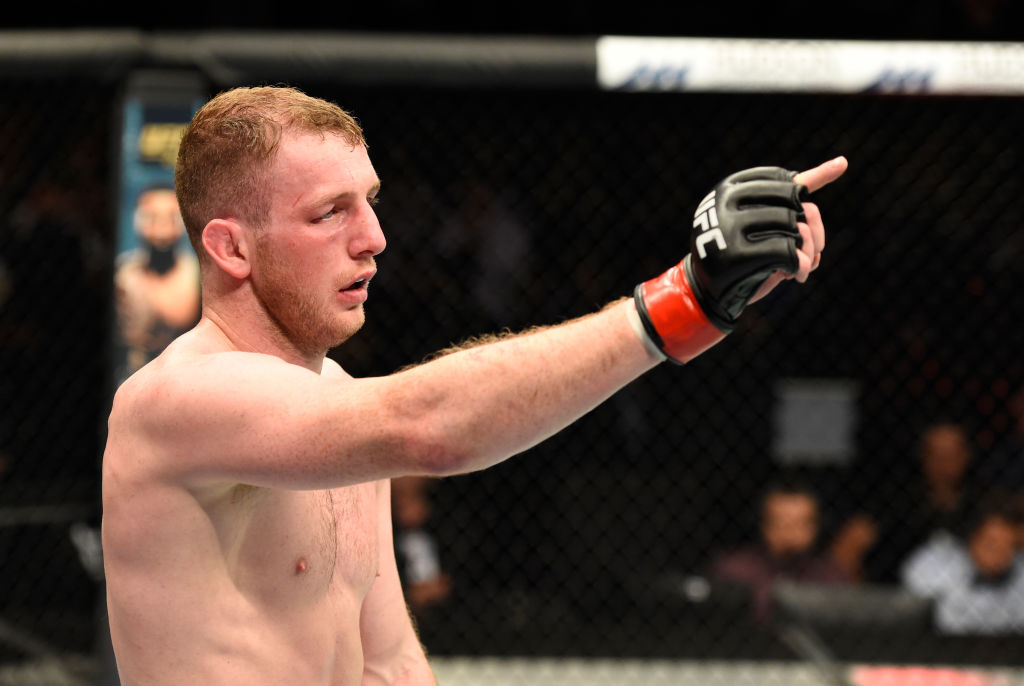 Danny Henry raises his hand after facing Daniel Teymur during the UFC Fight Night on July 16, 2017 in Glasgow, Scotland. (Photo by Josh Hedges/Zuffa LLC)" align="center" /> UFC fans may have gotten their first dose of Danny Henry last July when he debuted in his home country of Scotland with a Fight of the Night win over Daniel Teymur. But discerning fight fans already knew of “The Hatchet” thanks to his status as MMA’s next big thing…

“It's a bit of a mad story,” Henry begins, telling how he wound up fighting the seven fights prior to his UFC signing in South Africa for the EFC promotion.

“They were an all-African organization initially. Then they decided to go worldwide and they scouted Europe and other places for reputable gyms and fighters. Just by chance, they stumbled across some UK town and spoke to my coach, James Doolan, and said, 'Look, have you got any featherweights?'”

Doolan did have featherweights on the Higher Level Martial Arts team, mainly veteran Graham Turner. But he was too experienced for EFC, which wanted to build some stars from around the globe. Doolan asked Henry, 4-1 at the time and fighting at lightweight, if he could make 145 pounds.

“I said, ‘Yeah, let's go.’ And it all went from there. I signed the deal and the next thing I knew, I was flying out to Africa to fight.”

On the average, Henry traveled 14 to 15 hours from his hometown in Edinburgh to spots like Cape Town and Johannesburg to fight the local standouts. He wasn’t the most popular guy in the building on fight night.

“Everyone booed the f**king life out of me,” he said. “But it definitely did help. I'm a miserable bastard; I'll do anything to ruin their day. (Laughs) I think some of the boos actually got me through the fight, to be honest.”

In his seven fights for EFC from 2015 to 2017, Henry went 6-1 and won the promotion’s featherweight title twice. And looking back, there are no regrets – with the exception of those plane rides.

“I just took it as an opportunity,” he said. “I'm gonna get to go and see this country and get to do what I enjoy doing. It's all about making the sport work for you as well as you working for the sport. And if you can get and see other countries and perform in front of different nations, why not take the opportunity while it's there? And I enjoyed it. I loved it. Cape Town is one of the most beautiful places I've ever been in my life. It's an unbelievable place.”

As 2017 dawned, Henry was content where he was. He had a two-fight winning streak, was doing well in South Africa, and as he explains, “I never put a lot of pressure on myself to get in the UFC. I was always just taking it one fight at a time.”

But fate would soon intervene. The UFC was coming to Glasgow in July 2017, and Henry, like any other Scottish fighter worth their salt, wanted to be on that card. So when he was approached with a short notice fight against the last (and only) man to beat him in EFC, Igeu Kabesa, Henry believed this was his ticket to the big show.

“I took a late replacement fight on three weeks' notice,” he said. “I killed myself to make weight, I was actually supposed to get surgery on my elbow as well, and I knew that UFC Glasgow was happening in July. So I visualized that if I can go win my belt back in March against this kid that beat me once, that's a big win. And I was already on a two-fight win streak with two KOs, so if I could get that belt back, then maybe the UFC might have me in Glasgow.”

He avenged the loss, submitting Kabesa in the first round. He got the surgery on his elbow and things were looking promising. Until they weren’t anymore.

“I was well on my way to Glasgow,” he said. “And then I just had the worst run of luck, injury wise, that I ever had in my life. I wrote the UFC off and I wrote Glasgow off as well, to be honest.”

First he popped a rib, then when that healed, he broke his foot in three places.

“I was devastated,” Henry said. “I ate loads of food and I was going to all these social events with my girl. I went to weddings and drank loads of beer.” 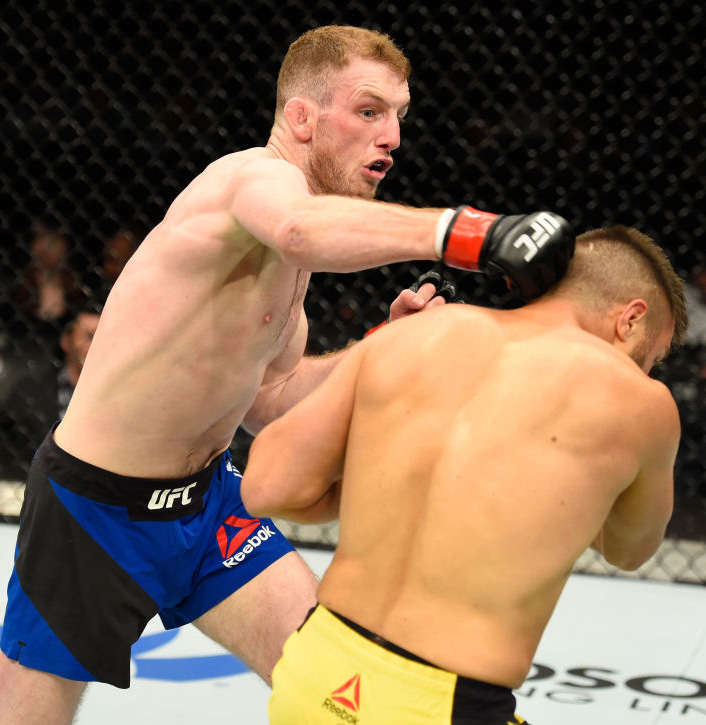 The UFC was calling. Three weeks out from the Glasgow card, Henry was presented with a fight against Daniel Teymur. He said yes, but the post-acceptance reaction wasn’t what it usually is.

Back at lightweight for the night, given the short notice of the bout, Henry and Teymur went to war for three rounds. When it was over, Henry had unanimous decision win, a bonus check, and cheers from his countrymen that he won’t soon forget.

“I wasn't gonna lose in front of my home crowd,” he said. “There was no way I was giving up. I think I was lucky, though, as well, because the other kid had just been married, so we were both sort of on a similar level weight and fitness wise. I just think I wanted it a bit more on the night. It all came together in the end.”

It did, and on March 17, Henry will get another semi-home game, as he travels to London to face Canadian newcomer Hakeem Nawodu in his return to featherweight. There aren’t a laundry list of injuries to deal with or anything to distract him from the task at hand, but even if there were, Henry has already proven to be made of sturdier stuff than most.

“It's a fight or flight kind of thing,” he said. “People will either fly or they'll stand and fight. I want to fight and I like testing myself. I've always been a bit scrappy. I grew up with three older brothers, so I've been fighting since I could stand, pretty much. (Laughs) It's always been in me.”

So what do those three siblings have to say about their little brother, the UFC fighter these days?

“They say f**king nothing these days,” he smiles. “They do exactly as they're told.”