"I’m gonna go in there and I’m gonna hit him, kick him, choke him, take
him down, slam him, and I’m gonna do everything to make him
uncomfortable." - Scott Jorgensen 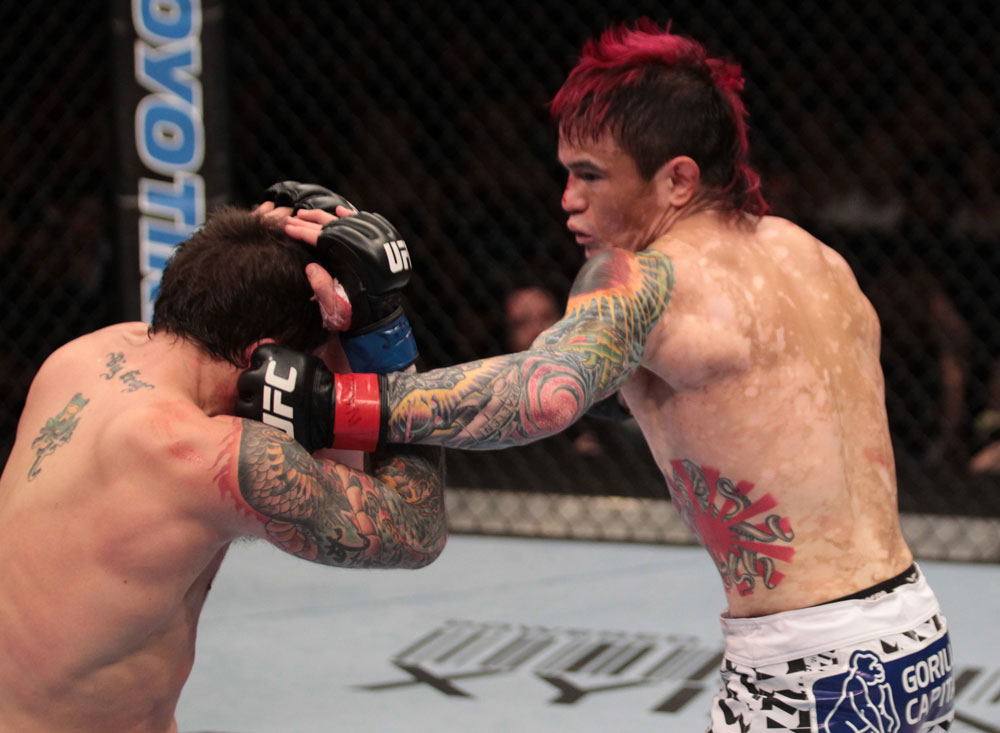 When it came to marketing, Scott Jorgensen wasn’t just good; he was damn good. A graduate of Boise State University who earned three Pac-10 wrestling titles in addition to his psychology degree, the Utah native was at a familiar crossroads for successful college athletes who don’t have a logical professional career (like the NFL or NBA) waiting for them in their sport as soon as school ends.

“I originally wanted to try it (fighting) out, but I had the option to go move to the Olympic Training Center, and in my mind, it was either wrestle and work a job and try to make the Olympics, or just become a regular guy, just working hard every day like my dad and build a life for myself,” said Jorgensen. “I took to fighting.”

And to working. Soon, his work ethic and talent sent him flying up the corporate ladder.

"When I graduated college, I was working in non-medical home care,” he said. “I was a marketing director, and my buddy kinda set me up with the job and I got going, and I was actually really good at it. I worked my way into ownership of a non-medical home care company, and I earned my ownership through building offices. I was a really good marketer, I went in there and doubled business for a company called Vida home care.”

Jorgensen wasn’t a bad fighter either, and less than two years into a pro career that began in 2006, he was invited to compete in the WEC, stamping him as one of the best bantamweights in the world. In the cage, Jorgensen was raw, aggressive, and able to make any opponent’s night miserable. His rise was steady in the organization, but after a 3-2 start, a Fight of the Night win over Takeya Mizugaki in December of 2009 started his road to the title. Three more wins (against Chad George, Antonio Banuelos, and Brad Pickett) garnered him a December 2010 fight with Dominick Cruz for not just the WEC, but the first UFC 135-pound title as well, and it was at this point he decided that splitting himself between his marketing job, fighting, gym ownership, and fatherhood wasn’t going to cut it anymore. Something had to go.

“Right before my fight with Dominick, I was like this has to happen,” he said. “I’m gonna call it quits with the day job stuff and this is what I’m gonna do. I’m gonna live my dream and ride it as long as I can.”

Jorgensen would lose to Cruz via unanimous decision, putting his dream on hold, but not crushing it. Remember, this is the same hard-nosed wrestler who put up with an ungodly schedule for years and still made it to the upper echelon of the division. One setback wasn’t going to deter him, and in 2011, he made his intentions known to a new fanbase in the UFC as he knocked out Ken Stone and decisioned Jeff Curran. This Saturday night, he faces streaking Brazilian Renan Barao in an intriguing pairing that may just be an unofficial title eliminator.

“I think it’s definitely gotta be up there right now,” said Jorgensen. “There’s only a few guys on a tear that I think could be considered number one contender. And I’m fresh off two straight wins, Barao’s on a heater, and to me it makes sense. I fully plan on beating Barao and facing the winner out of Dominick and Urijah.”

This March, Cruz and Faber continue their rivalry as coaches on the 15th season of The Ultimate Fighter before settling their score in a rubber match later this year. Should he emerge victorious against Barao and earn a title shot, Jorgensen will be in an interesting place. He wants redemption against Cruz, but after the first fight, the rematch is a tougher sell at the moment. And while Faber would be a more marketable fight, he is also friends with “The California Kid,” a dynamic that wouldn’t stop Jorgensen from taking the bout if a title is on the line. Regardless, Jorgensen already knows who he’s rooting for.

“Urijah’s my friend and I want him to win, regardless of whether I’m gonna fight him or not,” said Jorgensen. “He’s been a friend of mine for a long time, and he’s big factor in why I’m fighting today. We share the same managers, we’ve been sponsored by Form, and I want my friend to do well. Eventually I want to fight Dominick though, whether he’s got a belt or not. I didn’t perform the best against Dominick, but between those two in their title fight, I want Faber to win. And that’s not because of anything against Dominick for beating me. I will fight Dominick again down the road, I know that, and I’m not too worried about getting my revenge there.”

That’s a ways down the road though, and “Young Guns” knows it. Barao is a dynamic competitor fresh off a spectacular finish of Brad Pickett last November, and even if he wasn’t one of the most dangerous fighters in the division, Jorgensen would have his eyes solely on Saturday night, because the last time he let his focus stray, it ended up in the loss to Cruz.

“I’ve got one job ahead of me first and foremost, and that’s to go in there and take care of Barao,” he said. “And whatever happens between Dominick and Urijah, it doesn’t matter. As long as I take care of business February 4th, everything else falls in line. And that’s always been my mentality, and the one time I got away from that was before I fought Dominick. I started thinking ahead and started thinking that things were gonna be easy and handed to me.”

The lesson was a costly one, but a lesson nonetheless, and it reminded him that in this sport or in life, nothing comes easy. And as soon as the 29-year old Jorgensen remembered that blue collar work ethic instilled in him by his father, it was like riding a bike. Now his job is to make Barao miserable for 15 minutes or less.

“Barao’s a tough guy, he’s very well-rounded, and he’s on a streak, so he’s got a lot of confidence and he’s riding high,” he said. “But there are a lot of firsts in this fight for him, and he’s gonna get his eyes opened on what it’s like to be tangling with the guys at the top of the division. And I’m going in there with the same mentality I’ve had in my last two fights against Curran and Stone, and that’s to outwork him, put the pressure on him, and be first in everything. I’m gonna be the guy that makes him rethink whether he wants to sit through another couple rounds of this guy grinding on him, pushing him, breaking him, beating him, choking him. And that’s my gameplan. I’m gonna go in there and I’m gonna hit him, kick him, choke him, take him down, slam him, and I’m gonna do everything to make him uncomfortable. And I’m good at it.”

That he is, and as his six-year old son Braeten follows in his father’s footsteps (he’s already earned his orange belt, is entering his second season of freestyle wrestling, and can run half a mile and pull off 20 pushups, 30 situps, and four unassisted pull-ups), Jorgensen is showing him that in this family, you can have all the talent in the world, but the one who can outlast everyone is the one who succeeds.

“That’s 20-plus years of wrestling,” said Jorgensen when asked about mental toughness. “I made it my first three months of college with maybe one takedown. And that’s no joke. That’s perseverance and the heart of a champion. I’m somebody who’s not gonna break because the going gets tough. My grandpa always told me ‘cowboy up.’ And I’m not much of a cowboy – I’m tatted up and I got a red Mohawk (Laughs) – but there’s a little bit of country in me and a little bit of cowboy, and I’m not just gonna roll over because things get tough. If it’s gonna get tough, I’m gonna push back. And if he’s gonna push back, I’m gonna push back harder. I’m gonna grit my teeth and lower my chin and come forward.”