"We’re two of the top bantamweights in the world, we put on exciting
fights, and between the two of us we’re in double digits in bonuses, and
we’re both going in there for a victory." - Scott Jorgensen 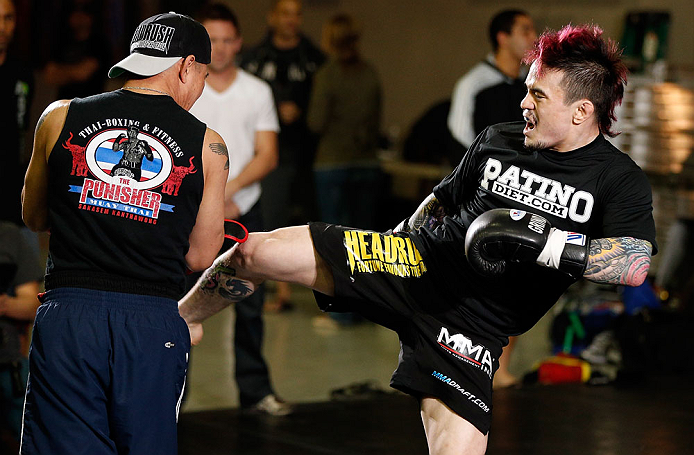 Scott Jorgensen has heard it all before his Saturday main event battle against Urijah Faber in Las Vegas. He’s answered questions about being called in on short notice for the fight, about fighting his good buddy Faber, and anything you could possibly ask a headliner before the most important fight of his UFC career.

So did we miss anything?

Jorgensen laughs, saying that no one has asked him what he was wearing or about his plans for the summer. Well, we’ll leave the clothes question for the fashionistas to ponder. But what about those summer plans?

“I’ve got this fight,” he said. “Then I gotta make up a trip to Hawaii that was supposed to happen, and I’d like to go back down to Brazil to get some training in with my jiu-jitsu coach and my team, Team Moraes. But the first thing after this fight, we’re gonna come home and I’ve got my son’s wrestling season to finish up. Three weeks after my fight he’s got his first State tournament, and we’ll see how he does there, and then if he wants, we’ll take him to Regionals in June. So my summer’s gonna be revolving around my son and just enjoying time with my family until the next phone call comes. I learned that you don’t plan things in this sport.”

And Jorgensen definitely didn’t plan Saturday’s scrap with Faber, but when Demetrious Johnson was forced out of his UFC flyweight title defense against John Moraga due to injury, the former training partners got the call, and both accepted to headline the TUF 17 Finale show at Mandalay Bay.

The five round non-title bout was immediately embraced by fans and the media, simply because as an action fight, it can’t miss. And when you add in the dynamic of the two bantamweight contenders being good friends, it just added fuel to the fire in terms of intrigue.

“This is a fight that I’m very, very excited for, and I think the fans should be because this is the first time that I know of in the history of the UFC that two friends who have trained together closely and shared management are fighting. It’s an interesting dynamic, but at the same time, we’re two of the top bantamweights in the world, we put on exciting fights, and between the two of us we’re in double digits in bonuses, and we’re both going in there for a victory. So when you get that mix, I think the fans are in for a treat.”

Of course, the whole friendship angle has dominated the pre-fight build up, but according to Jorgensen, the idea of fighting Faber wasn’t something that came out of the blue. As soon as Faber, the former WEC featherweight champion, announced that he was dropping to the bantamweight division in late 2010, they both knew a fight wasn’t just possible, but inevitable.

“We both knew, and it’s because of our wrestling background,” said Jorgensen. “We grew up wrestling, and when he dropped to 135, I’m at the top of the division, he’s at the top of the division, and we knew what was gonna happen one day. So we’ve talked about it, and we always wanted it to be for a title fight. Unfortunately that’s not the case now, but it’s a big fight, it’s a main event, it’s five rounds, and we’re gonna go out there and light it up.”

Jorgensen is coming into the fight on a high note, having snapped a two fight losing streak with a win over John Albert last December that earned him Submission and Fight of the Night bonuses. The victory put Idaho’s “Young Guns” back on the bantamweight fast track, and it helped him recapture the mojo he seemed to have misplaced in his listless February 2012 loss to Renan Barao. The 30-year-old would lose his next fight as well against Eddie Wineland, but in a much different fashion, as he went to war with his foe in a Fight of the Night bout. Against Albert though, he put things all together once again.

“The mind is a beautiful thing, and perception is everything in this sport for a fighter,” he said. “How you perceive someone you’re gonna fight, how you perceive your situation and your current standing with the UFC, and where you sit in the big picture of things. I know I’m one of the best at 135 pounds, and the pressure for me wasn’t necessarily go win because they’re gonna cut me. It was my personal drive and I don’t like to lose. I love to win and I hate to lose. So to win in a certain emphatic fashion was all from my inner drive. That’s what I want, and I like to perform and be exciting because I started fighting because I loved watching the sport, and there’s one thing I never liked, and that was a boring fight. So I go out there and put my heart on my sleeve and go to work. It’s paid off and it’s bit me in the butt, but at the end of the day, you live and die by what you make your mind up to do, and that’s what it comes down to with that fight with Albert. I made my mind up that I was gonna go out there, I was gonna win, I was gonna impress myself and my coaches, and I did all those things. And the byproduct of that are happy fans.”

Odds are they’re going to be happy again this Saturday night, regardless of the end result. That’s something that makes Jorgensen smile, but he’ll be even happier if he does what he went to Vegas for, and that’s win.

“It’s a decision I’ve made, and it literally boils down to anything you decide to do in your life, whether it’s a fight, a job, going to school, anything,” he said. “You make that choice. And I’ve made that choice and I’ve made it in the past, but things happen. You run into tough guys and things don’t always work out your way but you make a choice, and I made a choice. I’m gonna do everything in my power to win.”