Scott: I'd like to be the Next Big Thing 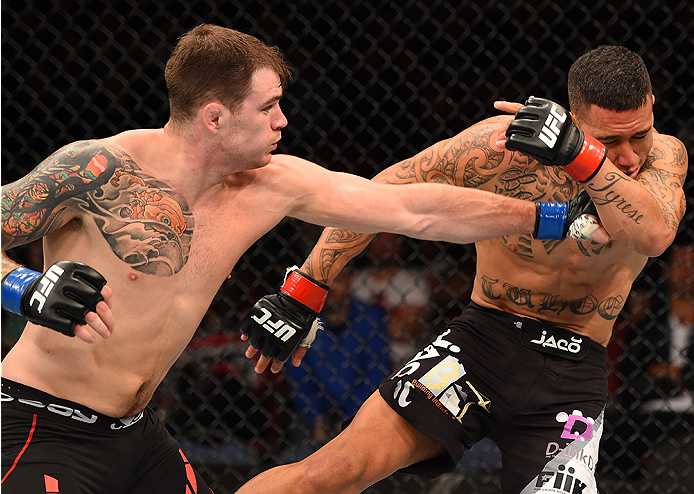 He may be a couple years behind schedule, but Bradley Scott still has all the tools to be England’s “Next Big Thing.” And he’s interested in the position.

“I’d like to be the Next Big Thing,” he said. “I’m sure I’d be all right. I’m quite a funny guy, quite chilled out, so it doesn’t bother me. I’ve just got to get a few things together.”

Like a year in which he fights more than once. The last time he was able to do that was when he fought twice in 2012, and even then it might have been more if not for a stint on The Ultimate Fighter: Smashes series in which he made to the final before losing to Robert Whittaker.

But since then, it’s been one fight each in 2013, 2014 and 2015. But with his injury woes in the past, an impressive submission win over Dylan Andrews in his most recent bout in his pocket and a fight on Saturday against Krzysztof Jotko in London to look forward to, things are looking up for the 26-year-old from Melksham, who is now training with The MMA Lab in Glendale, Arizona.

“One, it’s warm,” he said when asked why The Lab was the right fit for him. “Two, it’s away from all the distractions of home. Plus, the coaching’s great, I get along really well with everyone, and I like it here.”

Putting in a lot of time with UFC vet Joe Riggs as his main training partner, Scott has settled in nicely with the Arizona squad, and while he made it to the UFC on talent and determination, he’s looking to stay here by adding to his skill set in the U.S.

“My training at home is good, but there aren’t that many black belts,” Scott said. “I train with Roger Gracie every now and then, and a few other guys, but the level of training is so much higher out here, especially in terms of wrestling. I’m one of the better wrestlers when I train in England, and I’m f&%$ing terrible. (Laughs) So when I come out here, it’s like a blessing in disguise because there are six or seven All-Americans on the mat and 15-20 Division I wrestlers. So I always get good training here.”

And while Scott has had his share of rough days and nights in the gym, as the saying goes, the more you sweat, the less you bleed. For him though, training isn’t even the hardest part of getting ready for fight night. 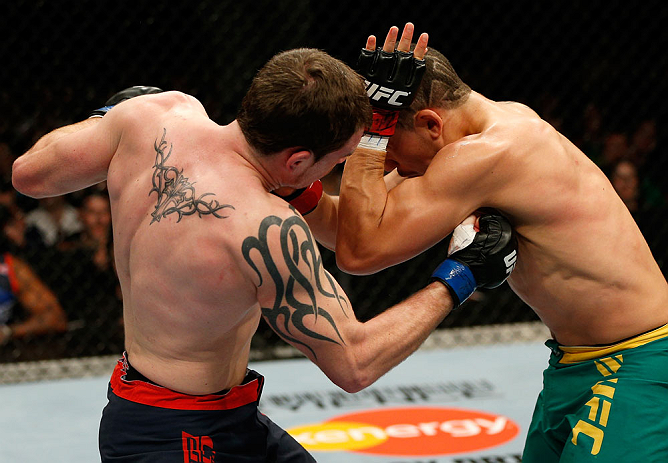 “The hardest part is the getting ready, the walking out; it’s all the nerves,” he said. “I’d like to fight every day of my life if I didn’t have the nerves. But with the nerves of walking out in front of 20,000 people, that’s what really separates the men from the boys anyway. A lot of guys break and crumble. I’ve seen guys cry before fights and not come out of the toilet. Some guys walk home on local shows and say f**k it and not do it at all.”

Scott doesn’t seem to be the nervous type, especially given his cool demeanor in and out of the Octagon. But that just may be a mirage, he admits.

Don’t miss Scott vs Jotko! Only on UFC FIGHT PASS from London on February 27

“I s**t my pants,” he said, also noting that various athletic commissions are not too thrilled with his frequent visits to the bathroom before his name is called. But once he’s gloved up and in the Octagon, everything changes.

“As soon as I’m in there, about a minute in, all the nerves are gone,” he said. “It’s just time to go, listen to your coach, and fight and win.”

And in 2016, Scott plans to have a bunch of nights like that, bathroom trips and all.

“Hopefully I’ll go 3-0 with three Knockout of the Night bonuses,” he said of his 2016 forecast. “And a house. That would be nice.”