Saturday’s UFC Fight Night: Rozenstruik Vs Sakai event is in the books, and now that the dust has settled in Las Vegas, it’s time to go to the scorecard to see who the big winners were at the APEX.

As the first round of his bout with Miguel Baeza ended, I wondered if Santiago Ponzinibbio’s over two-year layoff had taken something away from him that he’d never get back. First was the comeback loss to Li Jingliang in January, and now he was battered and bruised and in need of some adjustments to his gameplan after five minutes with Baeza. But over the next two rounds, Ponzinibbio was the fighter he was before the layoff, and while it would be nice to wax poetic about his technique of experience, his win had everything to do with guts and determination. He was not going to lose that fight, and he left everything in the Octagon in order to get his hand raised. That’s heart.

WHAT’S NEXT? Ponzinibbio will likely find his way back into the welterweight Top 15 after his Fight of the Night victory, and whether he does or not, he deserves a Top 15 opponent. Robbie Lawler or Vicente Luque anyone? I may need my heart checked before either of those fights happen.

It’s not easy to win five straight in the UFC. It’s even harder to do so in the UFC’s heavyweight division, where one swing of the fist can be a fight ender. But Marcin Tybura has done just that, and he’s had to take more than a couple swings from power hitters like Walt Harris and Greg Hardy to get here. And after a come from behind win over Harris last Saturday, he’s going to be perilously close to getting in the race for a shot for the heavyweight title. Not bad for a guy who went 1-4 from 2017 to 2019.

View All The Results From UFC Fight Night: Rozenstruik Vs Sakai

WHAT’S NEXT? Curtis Blaydes may be coming off a knockout loss to Derrick Lewis in February, but once the No.4-ranked contender returns, Blaydes vs. Tybura is an intriguing and important matchup among the big men. 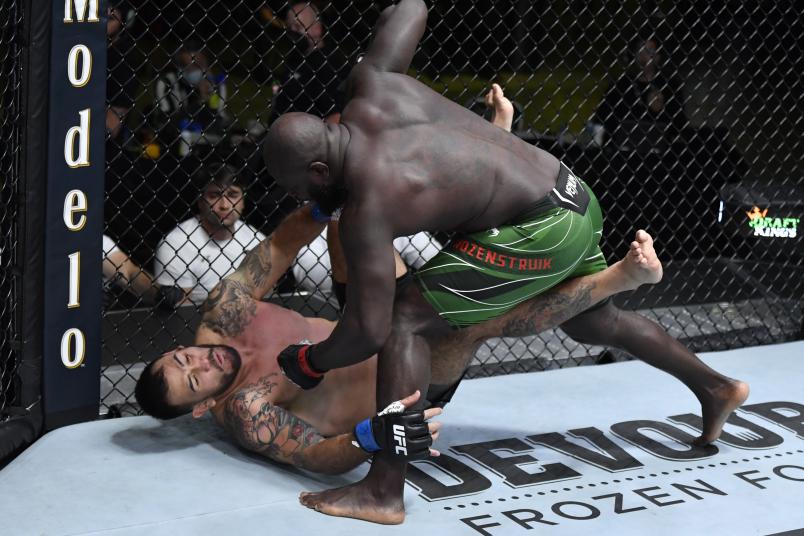 Jairzinho Rozenstruik of Suriname punches Augusto Sakai of Brazil in a heavyweight fight during the UFC Fight Night event at UFC APEX on June 05, 2021 in Las Vegas, Nevada. (Photo by Jeff Bottari/Zuffa LLC)

I don’t know if Jairzinho Rozenstruik’s late first-round knockout of Augusto Sakai puts him back where he was before a disappointing loss to Ciryl Gane in February, but it did show that when “Bigi Boy” lands with anything, it can very well be “Lights Out,” which keeps him in the mix in the sport’s glamour division. And sometimes, having that thunder in your gloves is all it takes to get you that next win, that next opportunity, and that always coveted title shot.

WHAT’S NEXT? I think the best course of action for Rozenstruik is to stay busy, and with much of the top five occupied or not about to return, he might need to look to the lower half of the rankings if he wants to keep an active schedule. Then there is the aforementioned Marcin Tybura or a couple of the division’s young guns, Chris Daukaus or Tom Aspinall.

While no one has emerged as a clear-cut contender for Valentina Shevchenko’s flyweight crown, would I be crazy if I thought that with a couple more wins, Manon Fiorot might be the one to give “Bullet” a tough test? Yeah, she hasn’t fought or beaten anyone in the UFC Top 15, but what she’s done in two UFC fights is dominate her opposition and get them out of there with a vicious finality. I want to see more from “The Beast,” and this time next year, the world may want to see her in with the champ.

WHAT’S NEXT? Fiorot has earned a shot at a Top 15 foe after last weekend’s win over Tabatha Ricci, and Antonina Shevchenko would not just be a good test for Fiorot, but a good style matchup for Shevchenko, as this will likely end up as a striking showdown. 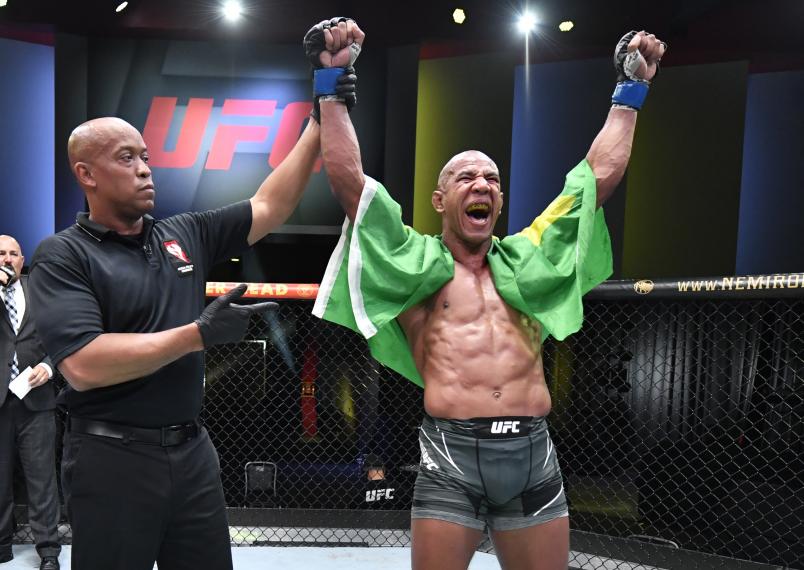 Gregory Rodrigues reacts after his victory over Dusko Todorovic of Serbia in a middleweight fight during the UFC Fight Night event at UFC APEX on June 05, 2021 in Las Vegas, Nevada. (Photo by Jeff Bottari/Zuffa LLC)

After a loss to Jordan Williams on Dana White’s Contender Series last September, Gregory Rodrigues appeared to be a fighter who would need a little more seasoning before getting called back to the Octagon. Well, after his impressive win over Dusko Todorovic, which followed a pair of knockouts in LFA bouts, consider “Robocop” seasoned and ready to go after big things in the middleweight division.

WHAT’S NEXT? I know Edmen Shahbazyan is ranked in the Top 10, but wouldn’t that be a fun fight? Or Rodrigues vs. Kevin Holland, or Brad Tavares? Don’t stop me now…