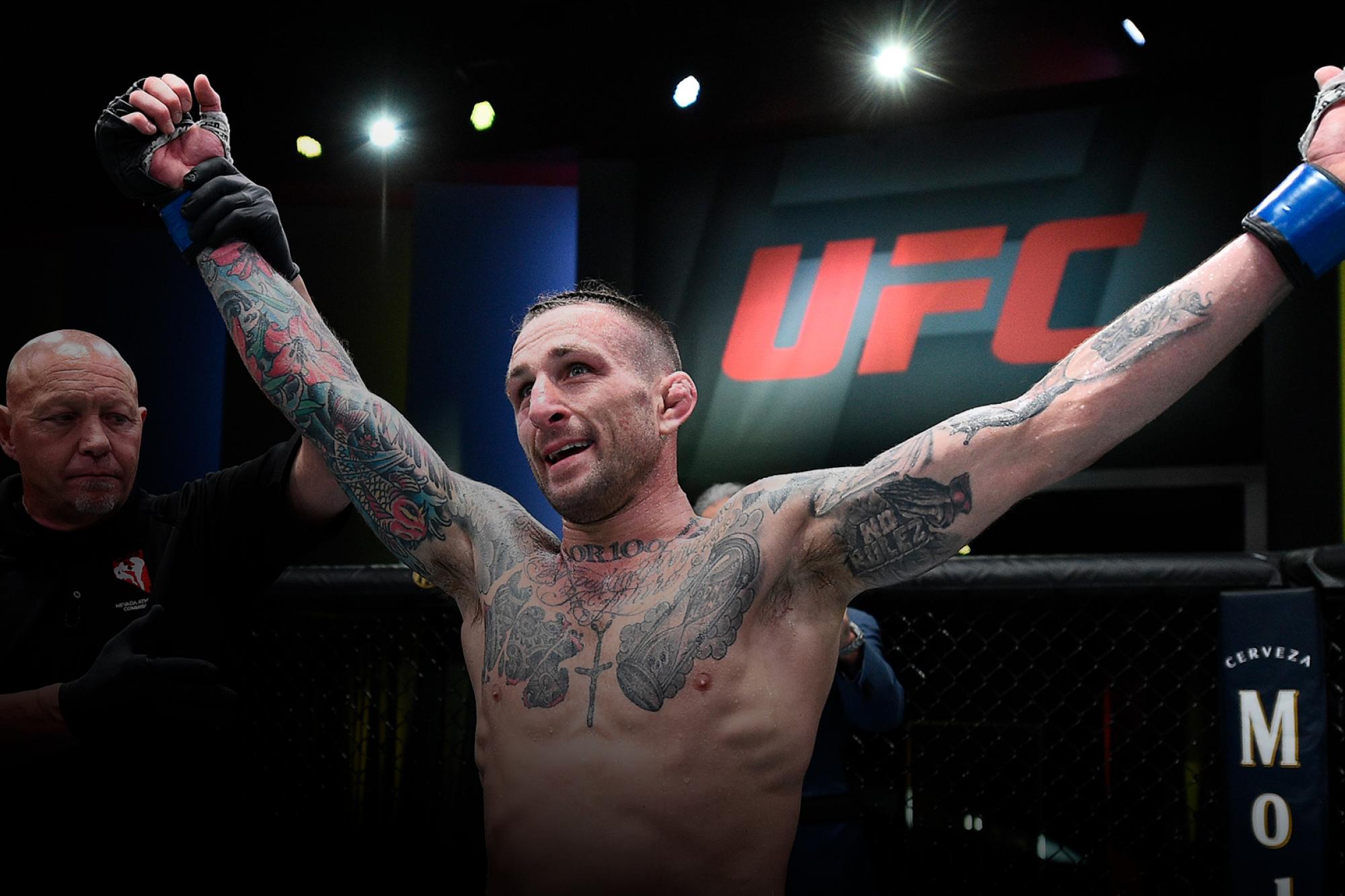 With Yet Another UFC Fight Night At The UFC APEX In The Books, We Break Down The Night's Biggest Winners
By Thomas Gerbasi, on Twitter @tgerbasi • May. 10, 2021

Saturday’s UFC Fight Night event is in the books, and now that the dust has settled in Las Vegas, it’s time to go to the scorecard to see who the big winners were at the APEX.

By definition alone, prizefighting comes with a certain level of risk anytime someone enters the ring or Octagon. Every fighter knows this. So you don’t really want to add to the degree of difficulty by taking on a legit contender in your first fight in 18 months, especially when that contender comes in at 160.5 pounds for a lightweight bout. That’s exactly what Gregor Gillespie did, though, and after a rough first round, he turned things around in the second, earning a stoppage victory and Fight of the Night honors. It was the perfect return for the New Yorker, and like he said after the bout was halted, it was all heart that got him the result he wanted.

WHAT’S NEXT? Gillespie made it clear after last weekend’s bout that he wants fellow contenders from here on out. Well, I’ve got one for him in Islam Makhachev. Stylistically and

Coming off the biggest win of her career over Amanda Ribas in January, Marina Rodriguez was rolling the dice by taking a short notice main event against veteran strawweight contender Michelle Waterson, even if it was ten pounds north at flyweight. But the reward was worth the risk for the Brazilian standout and she delivered the kind of performance that will make newer fans tune into her next fight, which made that a win-win for Rodriguez.

WHAT’S NEXT? With champion Rose Namajunas newly crowned for the second time, former champ Zhang Weili coming off the loss of her belt and Carla Esparza and Yan Xiaonan taking care of business later this month, the only fighters ahead of Rodriguez in the top 10 are Mackenzie Dern and Joanna Jedrzejczyk. Now if I had my way, Joanna vs Marina is the fight to make, not only aesthetically but in terms of the title race. That’s a fun one.

In less than five minutes, Alex Morono showed just how good he can be when he puts everything together when it counts. And he earned the spotlight that comes with his finish of Donald Cerrone over the course of a 13-fight UFC career that has been the epitome of the word “rollercoaster.” Experiencing big wins, crushing losses and everything in between, Morono has stayed the course, and now after the biggest win of his career, he’s finally in the position to start putting together the type of run that could carry him up the ranks at 170 pounds. In other words, it’s good to be Alex Morono today.

WHAT’S NEXT? Call me crazy, but wouldn’t a fight between Morono and former welterweight champion Robbie Lawler produce some fireworks? Morono said he’s fine putting on fights the fans want to see, and this fan wouldn’t mind seeing him throw hands with “Ruthless Robbie.”

It seems like every time Neil Magny fights and wins, I think about boxing and the idea of champions fighting a top 15 opponent as a “voluntary” title defense. Yes, that reality has been abused in the sweet science over the years, but there are fighters like Magny (or going back to Michael Bisping) who have been in the top 10 for years but never got over the hump to enter the title picture. And you saw what Bisping did when he got the short notice call to fight Luke Rockhold for the middleweight title. So while the beauty of the UFC is that the top guys (and gals) get their shot at the belt and that there’s only one champion per division, once in a while I’d love to see a grizzled vet g

et that call. Magny’s one of those fighters as a good guy who’s paid his dues and is still one of the best in his division.

WHAT’S NEXT? I like the sound of a Neil Magny versus Vicente Luque fight. I like it a lot. Then again, I know Khamzat Chimaev wants to make his return against the Brooklyn native, and that’s not a bad fight, either. Not bad at all.

If you say you didn’t write Phil Hawes off as an elite prospect with championship potential a few years ago, you’re probably lying. And let’s face it, it was justified. Hawes stormed out of the gate only to lose on the first episode of The Ultimate Fighter 23 in 2016. Then came back-to-back defeats against Louis Taylor and Julian Marquez, and the bandwagon emptied. Most would pack it in, but Hawes only bit down harder on his mouthpiece, and he hasn’t lost since. More impressively, he’s gotten better with each victory, most recently defeating fellow prospect Kyle Daukaus. Hawes IS the real deal, and that bandwagon is filling up again.

WHAT’S NEXT? Deron Winn is reportedly next for Hawes this July, but if that fight doesn’t happen, or if it does and he emerges victorious, I think Gerald Meerschaert would be a stiff test for “Megatron” to see where he’s at as he attempts to climb the 185-pound ladder.