With Yet Another UFC Fight Night At The UFC APEX In The Books, We Break Down The Night's Biggest Winners
By Thomas Gerbasi, on Twitter @tgerbasi • May. 3, 2021

Saturday’s UFC Fight Night event is in the books, and now that the dust has settled in Las Vegas, it’s time to go to the scorecard to see who the big winners were at the APEX.

Well, that didn’t take long, did it? In just two UFC fights, Jiri Prochazka has soared up the ranks at 205 pounds and now he’s looking at a possible title shot after a two-round stoppage of Dominick Reyes. That’s quite the way to make an entrance, but even though some have made a quick ascension to a title shot in the past, Prochazka is no rookie in the fight game. Owner of 26 wins before he made his first walk to the Octagon, the Czech Republic native earned his spot in the big show, and he’s earned his place among the top contenders in the light heavyweight division. And he’s done it with style, making him one of the most intriguing fighters in the promotion at the moment.

WHAT’S NEXT? Prochazka has to on the short list of contenders to face the winner of the bout between champion Jan Blachowicz and challenger Glover Teixeira, but if that fight takes place as expected in September, will Prochazka wait for what will likely be the end of the year, or stay busy? If he stays busy, the names Aleksandar Rakic, Anthony Smith and Magomed Ankalaev are all there, but that is a dangerous proposition for Prochazka in each instance.

RELATED: Jiri Prochazka Focused On What's Right In Front Of Him

As good as Giga Chikadze looked on Saturday night against Cub Swanson, the scary part is that he’s going to get better. Remember, this is someone who made his name in kickboxing and only turned pro in MMA in 2015. That’s a little over five years in the sport, compared to those who may have twice that level of experience. So we are not seeing the best of Chikadze yet, but it’s going to be fun to see what that version of him eventually looks like.

WHAT’S NEXT? Chikadze called his shot on Saturday night, asking for a fight with former champion Max Holloway, and while I’m on board with that one, with Holloway still the number one contender at 145 pounds, he’s likely going to get a bigger fight next. So what else is good? A fight with Calvin Kattar would be nice, as would one with Edson Barboza after the Brazilian finishes his UFC 262 bout against Shane Burgos. There are a ton of possibilities for the Georgian, who has a bright future at 145 pounds.

THE MACHINE! It’s hard not to think of Merab Dvalishvili and not put his nickname in all caps because that’s how it feels watching him fight. There’s an urgency to his attack on fight night, and while it was a competitive three-rounder with fellow bantamweight contender Cody Stamann, there was no doubt who the winner was going to be when the scorecards were read.

WHAT’S NEXT? I could watch Pedro Munhoz and Jimmie Rivera fight every weekend, but since that’s not going to happen, how about putting THE MACHINE (Sorry, couldn’t help it) in with one of these veteran standouts, both of whom have no issue going at it hard for 15 minutes? Get the Fight of the Night checks ready.

When flying knees and spinning kicks often take all the spots on the highlight reel, we sometimes need fighters like Sean Strickland to remind us that fundamentals count and more often than not get the job done. And while he’s not flashy, the Californian has quietly won three in a row since a motorcycle accident nearly ended his career. That’s a comeback story worth noticing, and it’s only getting better with each victory.

WHAT’S NEXT? Uh, Kevin Holland. Two Top 15 middleweights, and with Holland coming off back-to-back losses in which he was outgrappled by Derek Brunson and Marvin Vettori, I’m sure the “Trailblazer” will love the prospect of a kickboxing match with Strickland.

RELATED: Sean Strickland Is All About This Life | Luana Pinheiro Sharpens Her Weapons For UFC Debut

No, that’s not the way Luana Pinheiro wanted to pick up her win bonus, but if you take away the conclusion of her disqualification victory over Randa Markos and you had to be impressed by what you saw from the Brazilian prospect, who was aggressive throughout and delivered some exciting throws before the end came. Most important takeaway – you’ll want to see what she does next. 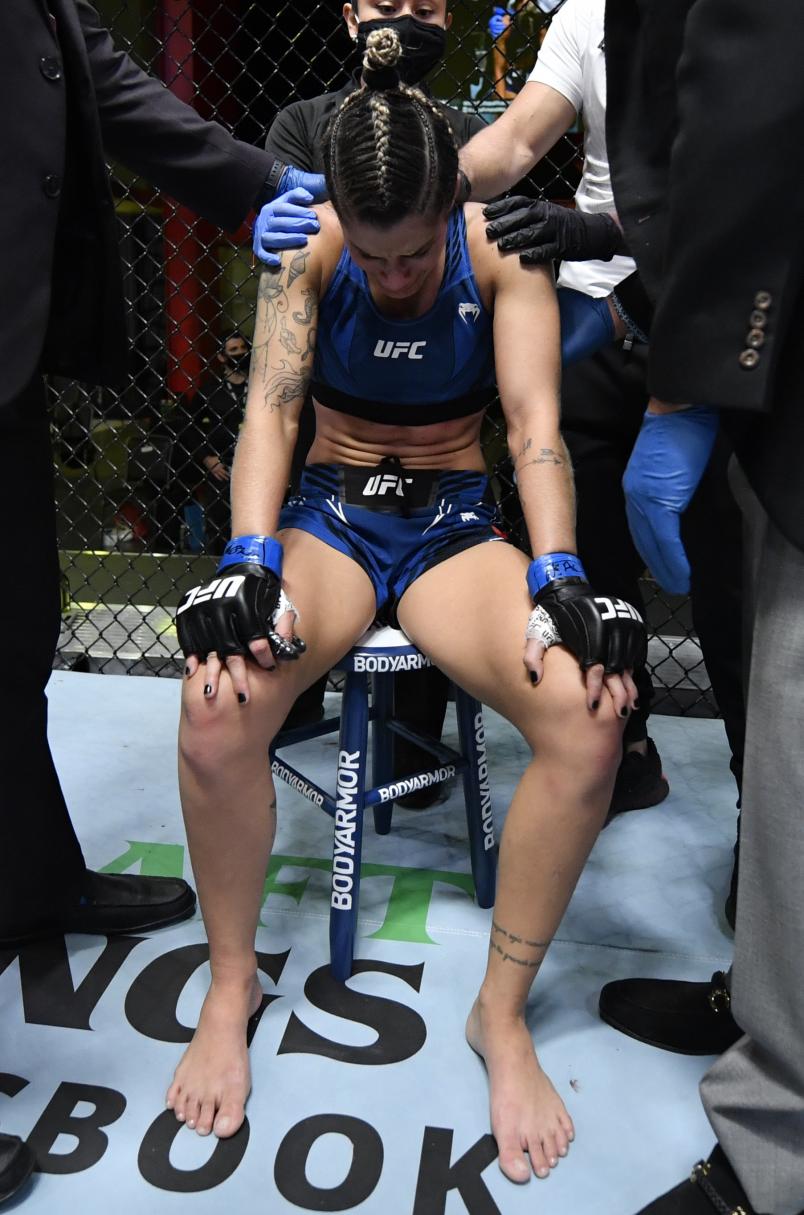 Luana Pinheiro of Brazil reacts after her disqualification victory over Randa Markos of Iraq due to an illegal kick during the UFC Fight Night event at UFC APEX on May 01, 2021 in Las Vegas, Nevada. (Photo by Jeff Bottari/Zuffa LLC)

WHAT’S NEXT? The bout with Markos was shaping up to be an interesting one, so I wouldn’t mind seeing that again, but if that’s not in the cards, I wouldn’t mind seeing Pinheiro in with one of the two other hot prospects at 115 pounds, Montserrat Conejo or Cheyanne Buys. Jinh Yu Frey or Ashley Yoder would be interesting matchups, too, if the UFC wants a veteran test for her.