Now That UFC Fight Night: Ladd vs Dumont Is Behind Us, It's Time For Us To Break Down The Biggest Winners From The Fight Capital Of The World
By Thomas Gerbasi, on Twitter @TGerbasi • Oct. 18, 2021

JIM “F**KING” MILLER. That’s what UFC Hall of Fame matchmaker Joe Silva used to call the Jersey battler for his willingness to take on all comers at the drop of a hat. Today, October 18, is the 13th anniversary of Miller’s first Octagon bout against David Baron, and two days removed from his first-round knockout of Erick Gonzalez, nothing has changed. He is still a relevant force at 155 pounds, still willing to fight all comers, and still JIM “F**KING” MILLER.

WHO’S NEXT? I don’t care, as long as there’s a next time for the King of Sparta, NJ

There have been boxers who found success at the elite level of the sport after 40, but whenever I see someone do it in MMA, I’ve got to put a little bit more on it, considering how many ways there are to lose in this sport and the four-ounce gloves that can turn a winning night into a losing one in a split second. So to see 42-year-old Andrei Arlovski beat back the charge of four heavyweight prospects in his last five fights is one of the more remarkable feats we’ve seen. Add in the fact that Arlovski is using Fight IQ and veteran experience to do it when he soared to the heavyweight title off a mix of athleticism, power and speed, and this is a treat for true fans of the sport. 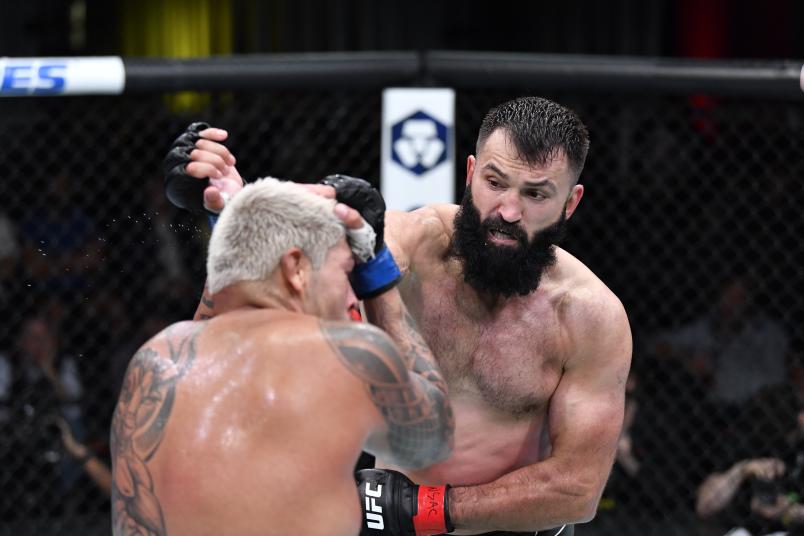 WHO’S NEXT? “The Pit Bull” wants a Top 10 heavyweight? Let’s see him get one – maybe Blagoy Ivanov

There are a few fight game adages that ring true, and two are that you can’t train a chin and you can’t teach power. Now Danaa Batgerel hasn’t had to defend his chin yet, as he’s 10-2 as a pro with his only two defeats coming by way of decision. As for the power, in three consecutive UFC wins, he hasn’t allowed Guido Cannetti, Kevin Natividad and Brandon Davis out of the first round. That’s power he was born with, but as he continues to move up the bantamweight ranks, the Jackson-Wink MMA team will help hone that power, making him even more dangerous. Get ready, 135ers, a “Storm” is coming. 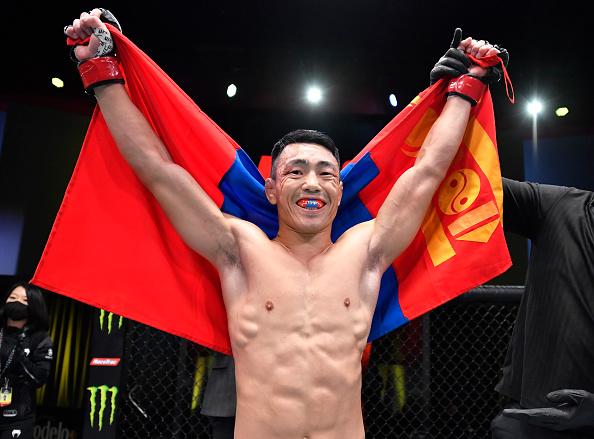 Danaa Batgerel of Mongolia reacts after his TKO victory over Brandon Davis in a bantamweight fight during the UFC Fight Night event at UFC APEX on October 16, 2021 in Las Vegas, Nevada. (Photo by Chris Unger/Zuffa LLC)

WHO’S NEXT? Cody Stamann would be an interesting style matchup and a step-up for Batgerel somewhere down the line. In the immediate future, seeing Batgerel in with fellow bantamweight gunslingers Adrian Yanez or Randy Costa would be fun.

Nate Landwehr is intense, aggressive, and fun. What a mix for a prizefighter, and that’s why guys like that ultimately bring home the biggest prizes. On Saturday night, Landwehr turned back prospect Ludovit Klein with a pressure-filled attack that ended with an anaconda choke submission. It was a much-needed victory for “Nate the Train,” whose post-fight interview was almost as entertaining as the fight, and that’s saying a lot. More Nate, please.

WHO’S NEXT? I don’t know why this popped in my head, but I think Landwehr against Bryce Mitchell would be all kinds of fun before, during, and after the fight.

Hey, Norma Dumont’s win over Aspen Ladd won’t win any Fight of the Year awards, and 90 percent of the post-fight media and social media coverage is about Ladd’s performance and her corner’s work in between rounds, but the fact remains that with the spotlight on her, the Brazilian fought a disciplined and effective fight against a dangerous and talented opponent. That means something, and in a small and wide-open featherweight division, Dumont is a player.