See Which Fighters Impressed Us Most At UFC Fight Night: Korean Zombie vs Ige
By THOMAS GERBASI, ON TWITTER: @TGERBASI • Jun. 21, 2021

While it was mentioned on Saturday’s broadcast and I know I put it in my pre-fight story on him, the fact that Chan Sung Jung aka The Korean Zombie has headlined eight consecutive UFC events is one of the most remarkable stats in the sport. And hey, he’s earned each of those spots for fighting the best available competition and delivering compelling fights, but still, that’s crazy and it’s something we all should be talking more about. So will he make it nine in a row? Given his latest effort against Dan Ige, I think that’s a safe bet.

WHAT’S NEXT? I look up and down the featherweight Top 15, and I think I wouldn’t mind seeing Jung in there with anyone there. But if we’re talking Top 5, Calvin Kattar or Max Holloway would be something special. And what about a rematch with Yair Rodriguez? I could go on all day with compelling matchups for the Zombie.

Marlon Vera is an intense individual on a normal day. On fight day, that gets amped up considerably, and that was certainly the case last Saturday when he met Davey Grant in a rematch of a 2016 bout won by the Brit. For three rounds, Vera just had bad intentions with everything he did, and when Grant met him with the same intensity, it was a special fight. Ultimately, though, Vera kept getting stronger as the fight progressed, and when Grant tired, “Chito” took it to another level. A fun fight, a fun fighter to watch, and Vera looks like he’s ready to take that next step at 135 pounds.

WHAT’S NEXT? Vera called for Dominick Cruz at the end of the Grant fight, and I like that fight for Vera. Fights with Frankie Edgar and Pedro Munhoz wouldn’t be bad, either, both for the combatants and for us watching.

If you’re not a fan of Matt Brown, well, you’re probably not a fight fan. From the time “The Immortal” made his UFC debut in 2008 up until his Saturday night knockout of Dhiego Lima, Brown has been the epitome of a no nonsense, blue collar fighter who doesn’t look for attention, but only the next call to the Octagon. You have to appreciate that attitude, and the fact that he’s still doing this at this level at 40 years old just adds to a legacy he should be proud of.

WHAT’S NEXT? When I do these things, I try to think of the first fighter to come into my head, and for Matt Brown, I would love to see him throw hands with Daniel Rodriguez. D-Rod has plans this summer, but if Brown wants to return in the fall, that would be a fight to remember and one not likely to go three rounds.

If I’m being honest, while SeungWoo Choi showed solid potential in his first four UFC bouts, I was never wowed by “Sting”. That changed on Saturday night, as Choi’s striking was fast, sharp and fight-altering en route to a first-round knockout of Julian Erosa. It’s funny what one fight – and a 107-second one, at that – can do, but oh, I can’t wait to see what’s next for the 28-year-old.

WHAT’S NEXT? If you’re talking an interesting striker vs grappler matchup, Choi versus Bryce Mitchell has a nice ring to it, but I’m wondering if Giga Chikadze would want to get in there with his fellow striker in a bout that could produce fireworks. 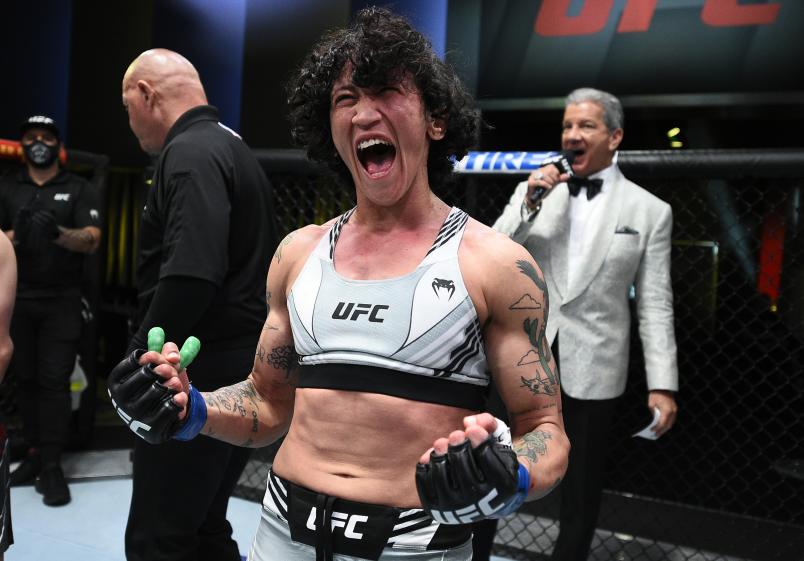 Virna Jandiroba of Brazil celebrates after her TKO victory over Kanako Murata of Japan in a strawweight bout during the UFC Fight Night event at UFC APEX on June 19, 2021 in Las Vegas, Nevada. (Photo by Chris Unger/Zuffa LLC)

The hat Virna Jandiroba wears before and after fights is enough to earn her a permanent place on this list following every bout, but if we’re taking fashion out of it, the Brazilian strawweight may be here on fighting merits alone. Delivering the best performance of her UFC stint thus far, Jandiroba dominated her bout with a gutsy Kanako Murata from the start to the second-round finish. And though she’s shown glimpses of what she can do in the past, on Saturday, she put it all together, letting the world know that she’s going to be a problem for any 115-pounder in her way.

WHAT’S NEXT? Nina Nunes might be a nice matchup for Jandiroba and one that makes sense for both fighters.