See Which Five Fighters Impressed Us Most At UFC Fight Night: Hall vs Strickland
By THOMAS GERBASI, ON TWITTER: @TGERBASI • Aug. 2, 2021 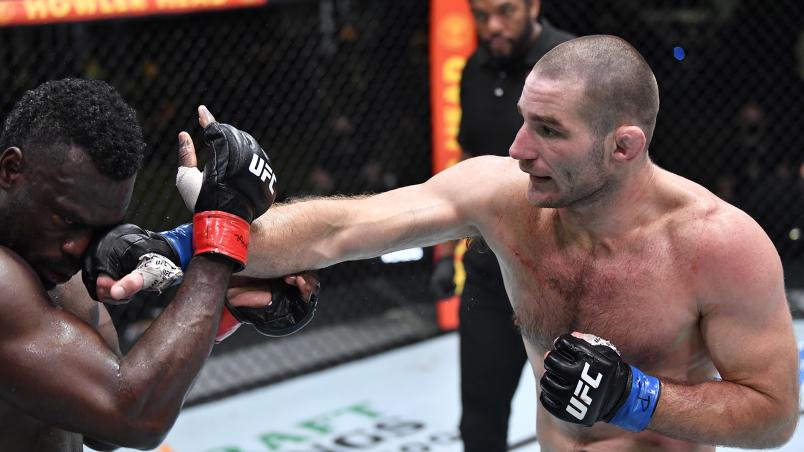 It’s been a long, winding road for Sean Strickland to make it to this point in his UFC career, and after an impressive five-round win over Uriah Hall, you get the impression that he’s going to be among the best middleweights in the world for a while. Now a winner of five in a row and showing no signs of slowing down, Strickland is closing in on a world title shot, and it may only take a couple wins for him to get there, whether he likes it or not.

RECAP | See All Results And Highlights From UFC Fight Night: Hall vs Strickland

WHAT’S NEXT? Strickland will likely move into the Top 10 at 185 pounds after the win over Hall, and when it comes to intriguing showdowns with opponents who will match him when it comes to pre-fight (or in-fight) gamesmanship, the names Paulo Costa, former training partner Marvin Vettori, and Darren Till immediately come to mind.

Cheyanne Buys had star written all over her from the time she appeared on Dana White’s Contender Series last summer, then came a frustrating loss to Montserrat Conejo in March that slowed the hype train down a bit. Enter a move back to Las Vegas and a blistering one-minute knockout of Gloria de Paula, and everyone is talking about “The Warrior Princess” again. And while she’s still a raw talent early in her pro MMA career, the potential is there for her to make plenty of noise in a talent-rich strawweight division.

WHAT’S NEXT? Diana Belbita is coming off a big win over Hannah Goldy on July 24 and a matchup with Buys would produce fireworks, for sure. 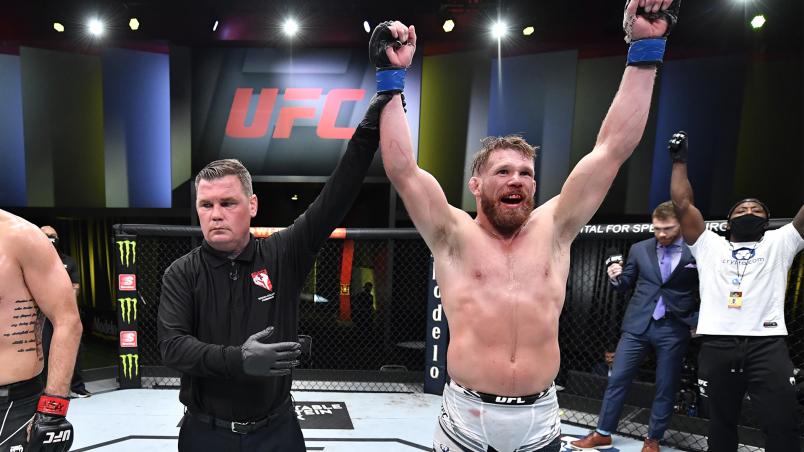 Jason Witt reacts after his victory over Bryan Barberena in a welterweight fight during the UFC Fight Night event at UFC APEX on July 31, 2021 in Las Vegas, Nevada. (Photo by Chris Unger/Zuffa LLC)

There were some dicey moments for Jason Witt in his bout with Bryan Barberena on Saturday, but “The Vanilla Gorilla” survived them, kept fighting, and the result was a Fight of the Night decision win in a matchup nearly everyone picked to be the Fight of the Night. More importantly, Witt did something that’s not easy for anyone, and that’s coming back from an early knockout loss. And considering that he’s had two in his four UFC bouts, it shows the type of resilience the Kansas City veteran has.

See What Witt Had To Say After The Win

WHAT’S NEXT? See below…

Like Jason Witt, Jared Gooden is one of those fighters who paid his dues on the local circuit, waiting for his call to the big show, and once he got here, things didn’t exactly pan out the way he wanted them to. But when he took a short notice bout against Niklas Stolze, Atlanta’s Gooden finally put everything together and scored a stunning 68 second knockout win. If you don’t smile about a guy like that finally seeing good fortune shine on him when his back was likely against the wall, I don’t know what to say.

A good buddy of mine texted me after Melsik Bahdasaryan’s TKO win over Collin Anglin and, telling me that “The Gun” should get his own TV show. Now this is someone who never heard of the Armenian banger before Saturday’s bout, but after the southpaw upped his pro record to 6-1 with five knockouts, he requested a seat on the bandwagon and wanted to see more. And it’s a safe bet to say that we will be seeing more of Baghdasaryan in the coming months and years.

WHAT’S NEXT? Still in the formative stages of his pro career, the questions is whether Baghdasaryan will be matched with a veteran or a fellow prospect the next time out. Me, I prefer the veteran route, simply because those fighters who have been around the block a time or two will likely test the KO artist by simply not going down. And when an expected early win turns into a grueling three-rounder, we’ll see what Baghdasaryan can really do.