Now That UFC Fight Night: Dern vs Rodriguez Is Behind Us, It's Time For Us To Break Down The Biggest Winners From The Fight Capital Of The World
By Thomas Gerbasi, on Twitter @TGerbasi • Oct. 11, 2021

Marina Rodriguez is never going to be the fighter lighting up social media with incendiary comments or making more noise outside the Octagon than in it, but when it comes to being one of the best strawweights in the game, the Brazilian has that part down pat.

Winner of three straight, she’s impressed in the main event spotlight in her last two against Michelle Waterson and Mackenzie Dern, and now she’s got to be considered to be next in line in the title race after the only fighter to beat her, Carla Esparza.

WHO’S NEXT? Rodriguez is in a tough spot with champion Rose Namajunas and former champ Zhang Weili taking care of their business later this year and Carla Esparza likely next in line for a shot at the winner. So if Rodriguez wants to stay busy, the only fighter ahead of her is Yan Xiaonan, who is coming off a loss to Esparza. That is an interesting fight, though, even if it won’t move Rodriguez too much further at 115 pounds.

No truth to the rumor that I was driving the Mariya Agapova hype train after her UFC debut in June 2020, but I may have been spotted sitting shotgun.

She just had that Joanna Jedrzejczyk vibe to her, that every fight was just that – a fight – and that every move was designed to end that fight. Then she lost to Shana Dobson and more than a year on the sidelines followed. So there were question marks heading into her bout with Sabina Mazo, but she answered all of them, scoring an impressive third-round submission of her fellow flyweight prospect. All aboard – that train is ready to leave the station again. 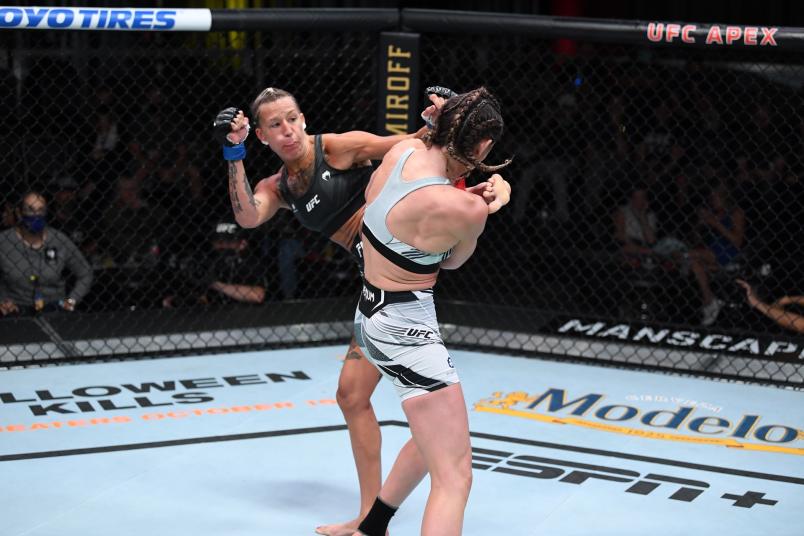 WHO’S NEXT? Maycee Barber has the experience edge on Agapova, but I get the feeling that Agapova wouldn’t mind taking that fight. And I wouldn’t mind seeing it.

All you need to know about Loopy Godinez is that after her disputed decision loss to Jessica Penne, the Mexico native was willing to take a short notice bout against Sarah Alpar – up two weight classes. 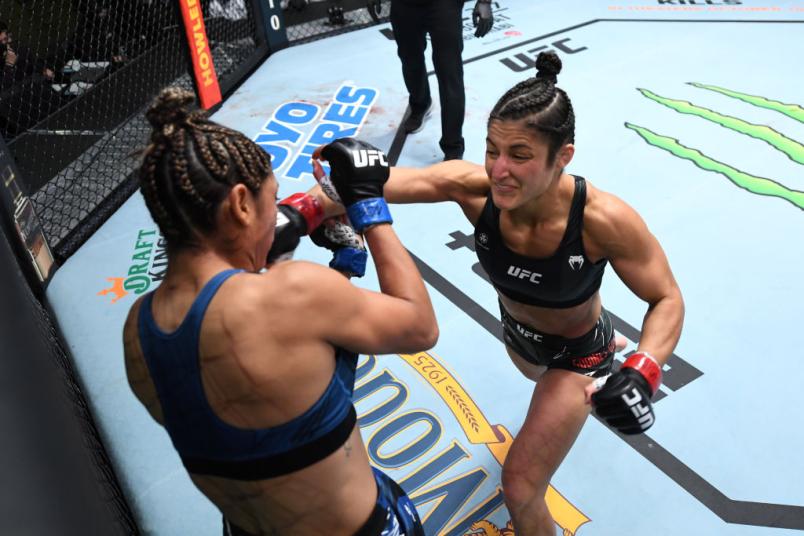 She’s a tenacious, talented fighter who has the potential to make a lot of noise in the strawweight division, and she proved it with a first-round finish of Silvana Gomez Juarez. Godinez is all fighter, and it’s going to be fun to see where she goes next in a tough division.

WHO’S NEXT? Virna Jandiroba would be a fast-paced battle and a good one for both fighters.

In the New York area, fight fans knew for a long time just how good Randy Brown was. Now the rest of the world knows, thanks to a shutout decision win over Jared Gooden that had the co-main event spotlight in the APEX.

The victory made it 4-1 for Brown in his last five, and he finished three of those wins before the final horn, showing that he can either get an opponent out of there early or take them into deep waters. Now “Rudeboy” is ready for the welterweight Top 15.

WHO’S NEXT? Brown versus Geoff Neal or Santiago Ponzinibbio? Sign me up.

Alexandr Romanov has the size, the record and the style to become a player in the heavyweight division, and the style part of it may be the most important factor as the Moldovan moves up the ranks. On Saturday, he was at his mauling, ground-and-pound best in beating Jared Vanderaa. He had some issues with Juan Espino in his previous bout, but other than that, he’s been untouchable. One to watch for sure.

WHO’S NEXT? Blagoy Ivanov would be an interesting matchup of two heavyweight powerhouses with Top 15 implications.