The Scorecard | UFC Fight Night: Brunson vs Till

Now That UFC Fight Night: Brunson vs Till Is Behind Us, It's Time For Us To Break Down The Biggest Winners From The Fight Capital Of The World
By Thomas Gerbasi, on Twitter @TGerbasi • Sep. 6, 2021

Yeah, Derek Brunson’s first fight with Israel Adesanya in 2018 wasn’t pretty for the North Carolina native, but if anyone earned his opportunity for a rematch – with the belt on the line – it’s Brunson. Four fights since then, four wins and a pair of finishes, prove that the ever-evolving veteran hasn’t let the past dictate his future.

He was in top-notch form on Saturday against Darren Till, and he’s one of the rare fighters who continues to refine his game while facing killer competition every night.

WHAT’S NEXT? If not Adesanya, then how about a number one contender’s bout against Jared Cannonier? Or what about this – say former champion Robert Whittaker regains his crown from King Izzy? Whittaker-Brunson I in 2016 was pure fireworks; wouldn’t mind seeing them run that one back.

There were a lot of people talking about Paddy Pimblett heading into Saturday’s event in Las Vegas. I’m guessing a lot more are discussing “Paddy the Baddy” following his UFC debut win over Luigi Vendramini. No, it wasn’t a flawless victory for the Liverpool native, but it was a thrilling one, a fight that made you want to see him back in action as soon as possible.

Paddy Pimblett Is Showing Up Right On Time

And call me crazy, but I don’t like to see perfection from a fighter; I want to see what he does when he or she faces adversity. Pimblett took his lumps from the Brazilian, then roared back until he got to finish. Add in enough personality to fill an entire division, and he may just live up to his claim that he will be the UFC’s next big thing. 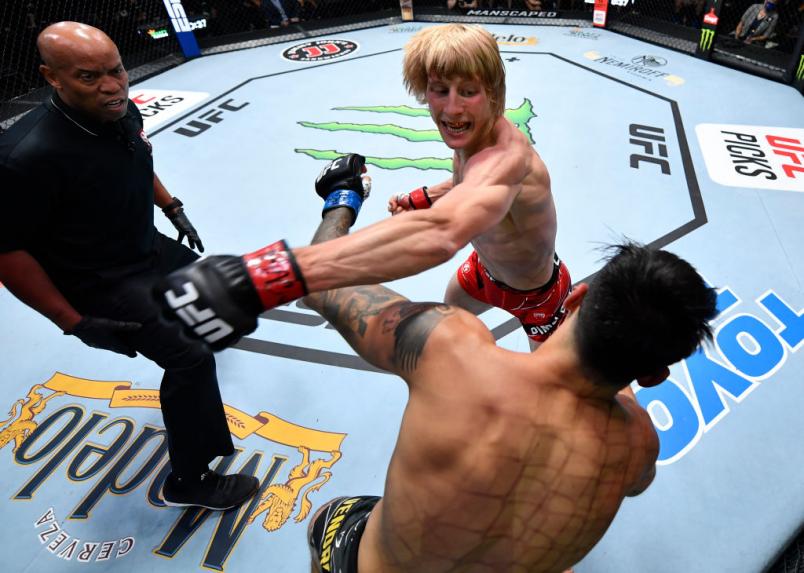 WHAT’S NEXT? When you talk like Pimblett does, there’s really not much room for going backward, so every fight from here on out will be just as evenly matched as his debut. So…the internet seems to be talking about a fight between Pimblett and power hitter Terrance McKinney, and I like it. Yes, I like it.

For someone who is 4-0 in the UFC with four finishes, including victories over Andrei Arlovski and Serghei Spivac, Tom Aspinall may be the humblest fighter I’ve ever seen. And while I respect and appreciate the Brit’s humility, he’s too good to be on a slow track to the top. In other words, he’s proved that he belongs – not just in the UFC, but among the best heavyweights in the game. 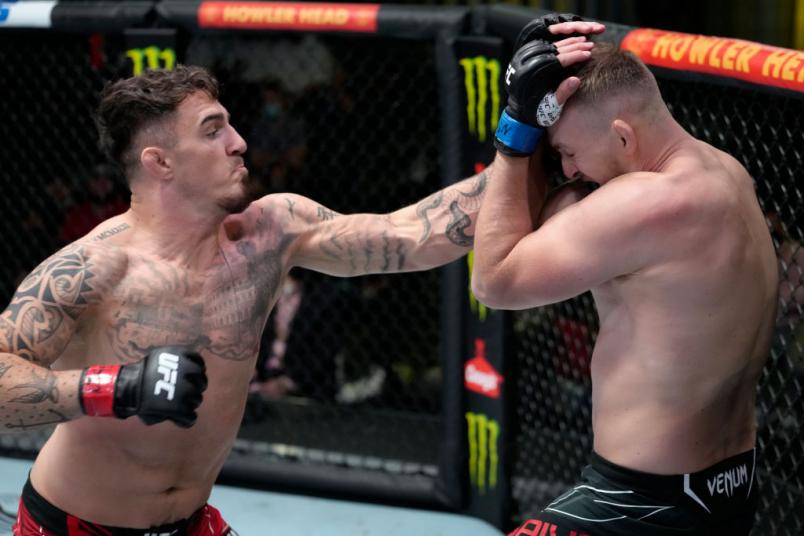 Tom Aspinall of England punches Serghei Spivak of the Ukraine in their welterweight fight during the UFC Fight Night event at UFC APEX on September 04, 2021 in Las Vegas, Nevada. (Photo by Jeff Bottari/Zuffa LLC)

Tom Aspinall of England punches Serghei Spivak of the Ukraine in their welterweight fight during the UFC Fight Night event at UFC APEX on September 04, 2021 in Las Vegas, Nevada. (Photo by Jeff Bottari/Zuffa LLC)

WHAT’S NEXT? The beauty of the UFC has always been that rising stars aren’t protected like they are in boxing, so while it’s tempting to keep guys like Aspinall and Chris Daukaus away from each other until a title shot may be on the line, I’m selfish and I want to see the two best rising heavyweights on the roster in there with each other ASAP. And given their upside, a first meeting between them may not be the last.

I’ll admit it. After my colleague McKenzie Pavacich filed her story on Molly McCann, I asked her if a sound clip of “Rumble, litt

le meatball, rumble” existed. It did, I have it, and it may end up as my ringtone soon. What does this have to do with McCann’s win over Ji Yeon Kim? Nothing, but it does show the impact the Liverpool native has had on everyone she’s come in contact with over the years.

Molly McCann Is Putting Herself First

Yeah, she can fight, and yeah, the two flyweights deserved their Fight of the Night bonus, but the way I’ve always seen fighting is that for someone to become bigger than the sport, there has to be a connection between fan and athlete. McCann has that connection, and it will be interesting to see where she takes that in the coming years.

WHAT’S NEXT? I think a matchup with Sijara Eubanks is an interesting stylistic matchup, and while “SarJ” holds the edge on the mat, she has been willing to let her hands go on the feet, and if this fight remains standing, there could be another Fight of the Night bonus waiting to happen.

Julian Erosa is a living, breathing testament to the power of experience in the Octagon. Just watch his fight with Charles Jourdain for proof. Sure, he took some hard shots from the Canadian, but when the fight was on the line and he had to make that winning move in the third round, he did, submitting Jourdain to make it four wins in his last five fights. It’s good to see Erosa having success like this, because he’s a heck of a fighter and he certainly paid his dues.

WHAT’S NEXT? I don’t even care at this point because any Erosa fight is a must see for me. And it should be for you, too.