When Matt Sayles gets introduced this Saturday night before his bout against Bryce Mitchell, he will most likely keep his poker face as his record is revealed.

That doesn’t mean that the 8-2 slate doesn’t irk him just a little thanks to both of those defeats coming via close decisions many believe he should have received. So yeah, there is a part of him that thinks he could be undefeated right now.

The most recent one stings a little more than his 2016 split decision defeat to George Hickman, mainly because it was his UFC debut in August 2018 against Sheymon Moraes and a chance keep the momentum going after an impressive win over Yazan Hajeh on Dana White’s Contender Series.

That fight took less than two minutes. The Moraes bout went all 15, but the San Diegan felt that he did enough to leave with his hand raised. It wasn’t, but it did get him even more motivated for his second trip to the Octagon against Kyle Nelson in May. It didn’t matter that he was fighting the Canadian in his home province of Ontario. He needed and wanted that win and didn’t want the judges involved.

He got his wish, submitting Nelson at 3:16 of the third round.

“It did feel good to have a little pressure off my shoulders,” Sayles said. “I thought I won the first fight (against Moraes), so coming into the next one, I was very confident, but I just didn’t want to let it go a decision again, so I made sure I got the finish. Now, I’m just gonna move forward and keep racking those wins up.”

His next chance is in Washington, D.C. against former Ultimate Fighter semifinalist Mitchell, and while it’s been seven months since his last appearance, it feels like perfect timing for the 25-year-old featherweight.

“I’ve been in the gym working a lot on my boxing and just staying busy, really,” he said of his absence. “I think this was good timing because I needed some time to deal with some family issues and get myself into fight shape, and I think this worked out perfect. I’m ready to go.”

It’s a mature outlook from Sayles, who is eager to prove himself at the UFC level but also not rushing the process at the same time. I ask where such an impressive balancing act comes from.

“I grew up without a dad for most of my life, so maybe it’s that,” he said. “I’ve dealt with a lot of things myself, but I don’t know where it comes from. Maybe that’s a contributing factor.”

Whatever it is, it’s been working for him, and if it’s not broke, don’t fix it.

“I know my position and where I’m at right now, and there’s really no rush for me,” said Sayles. “I think I’m just gonna keep doing what I’m doing, racking up wins and getting finishes, and see where it goes.” 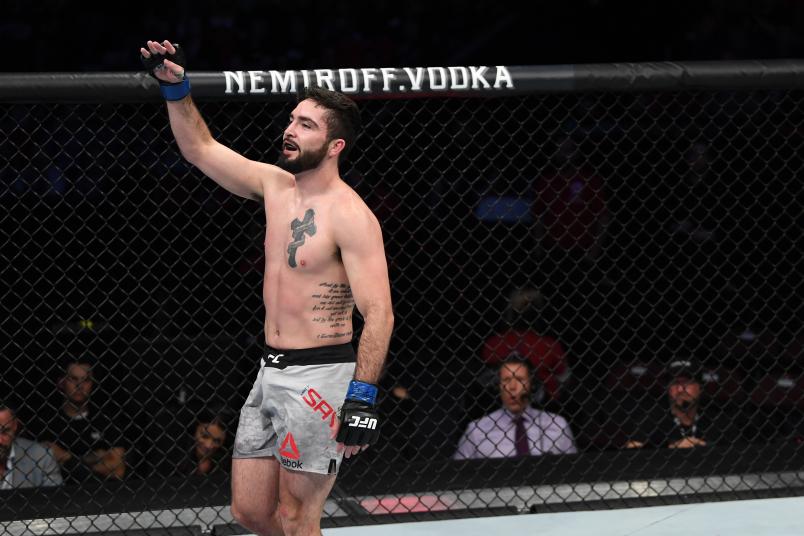 OTTAWA, ON - MAY 04: Matt Sayles celebrates his submission victory over Kyle Nelson of Canada in their featherweight bout during the UFC Fight Night event at Canadian Tire Centre on May 4, 2019 in Ottawa, Ontario, Canada. (Photo by Jeff Bottari/Zuffa LLC/Zuffa LLC via Getty Images)

OTTAWA, ON - MAY 04: Matt Sayles celebrates his submission victory over Kyle Nelson of Canada in their featherweight bout during the UFC Fight Night event at Canadian Tire Centre on May 4, 2019 in Ottawa, Ontario, Canada. (Photo by Jeff Bottari/Zuffa LLC/

Sayles sounds like a veteran, and yeah, unlike many 25-year-olds, but with fight week now underway, he’s still got that nice combination of wonder, butterflies in the stomach, and the desire to punch somebody in the face.

“It’s a mix of everything,” he said. “Being my third fight in the UFC, I’ve kind of gotten used to the backstage stuff and all the lights and that’s really been what’s been the hardest part for me in adjusting from being in the smaller shows for most of my professional career. But it’s just a fight for me. If I do what I do in the gym in front of everybody there, I think I’ll be good. I just have to perform.”

But what if the little devil and angel show up, the angel saying, ‘Stick to what got you here,’ which is his Muay Thai and boxing, while the devil says, ‘Hey, you submitted the last guy; why not go to the ground with this kid who is a groundfighting specialist?’

“I kinda listen to both,” Sayles laughs. “If it’s there and I can submit him, I’ll submit him. But I think the smarter game plan is to keep it on the feet. So I’ll keep it there, and if I gotta grapple him, I’ll grapple him.”

“Hopefully, I’ll get a couple more wins, renew my contract with the UFC and keep moving forward,” he said. “If I beat this guy, he’s got a decent enough name that maybe I can call some name guys out after this if I get a big win, but if not, I’ll keep moving up and see where it goes. But the plan is to get to the top, so we’ll see.”