On Saturday, Dan Miller Gets His Turn to Fight

"I’m going in there to try and finish him, so whether I do that standing or on the mat, it doesn’t really matter.” - Dan Miller 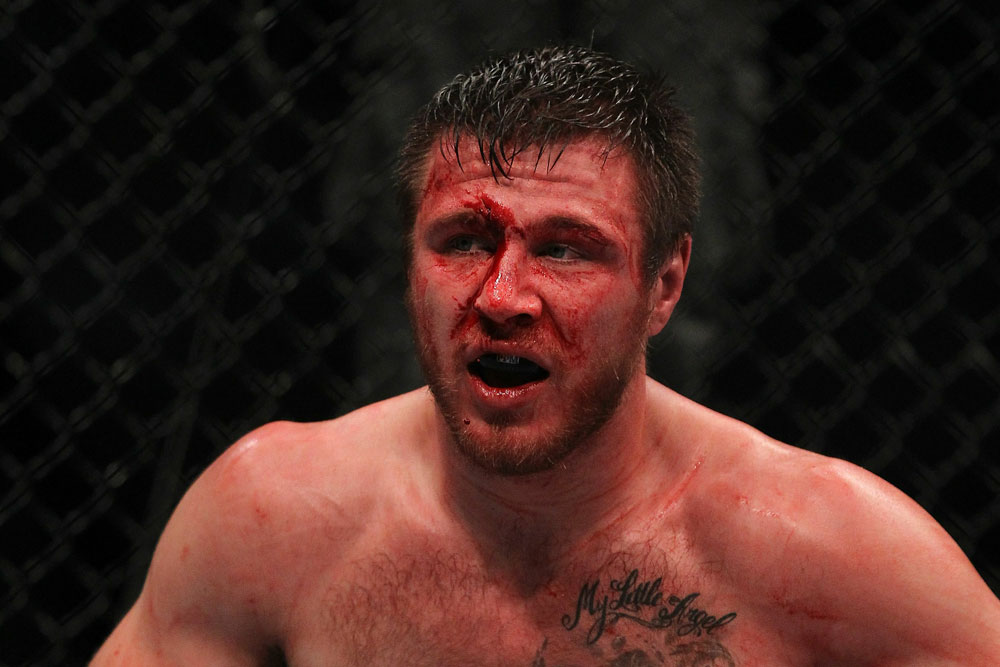 For some, it would have been a bit of a dilemma; for Dan Miller, packing up his bags and traveling to Milwaukee just a couple weeks away from a pivotal fight to corner his brother Jim against Ben Henderson was a no brainer.

That’s pretty much all you need to know about who this 30-year old middleweight is.

“Training was a little harder, but I got my training in out there,” he said. “One of my striking coaches and Mike (Constantino) were out there, so I got to grapple and hit pads and keep up with everything, so it didn’t interrupt my training too bad.”

If it wasn’t for the three year age difference, you would think that New Jersey’s Miller brothers were twins, that’s how attached at the hip they are. So for Dan to leave Jim before a big fight, it was something that just wasn’t going to happen, and Jim would have done the same thing for Dan. And while both were disappointed by the end result – a decision win for Henderson on August 14th – if there was a bright side, it was that the trip back home to Jersey meant that Dan could now focus completely on his own fight this weekend in Brazil without the stress of his brother’s bout on his mind.

“I was nervous, and it was a big fight, so it was kinda good to get it out of the way so I could concentrate on myself,” said Miller, who also had to deal with the emotions that come over him anytime he’s at a UFC event that he’s not competing in.

“When I see him (Jim) warming up and we’re at the event, there’s so much energy it’s ridiculous, and I just want to fight every time I’m there,” he laughs. “I get so pumped up and I want to get in there; even if I’m sitting in the crowd, I get that anxious feeling.”

Now it’s Jim’s turn to get that feeling as Dan prepares for home country favorite Rousimar Palhares. It’s been a constant for the brothers since they decided to abandon dreams of becoming Whippany’s first rodeo cowboys to tackle the world of mixed martial arts. From there, you couldn’t think of one without the other.

“We started together and he (Jim) had a lot to do with my keeping with it and training so hard,” said Miller. “In the beginning, neither of us wanted to say no to each other. I didn’t want to be the guy to say ‘no, I don’t want to go to practice today.’ And he was the same way, so for a long time we just went every day because neither of us wanted to be that guy. (Laughs) We were going five, six days a week because I didn’t want to disappoint Jim and he didn’t want to disappoint me. It was constant training and it got us into it, and we excelled because we just jumped in and trained real hard.”

And the sky’s the limit for both of them. Jim has gotten more attention in recent months thanks to a seven fight winning streak that was recently snapped by Henderson, while Dan has struggled as of late, losing four of six bouts. But when the losses have come against Chael Sonnen, Demian Maia, Michael Bisping, and Nate Marquardt, you tend to give Miller a bit of a pass, especially since he wasn’t blown out of any of those bouts.

But winning pays the bills, and despite a two-fight winning streak that ended in March at the hands of Marquardt, Miller knows the importance of turning Palhares back on Saturday in Rio De Janeiro.

“A win over him helps me keep my job,” he said. “That’s foremost. In my eyes, he’s a great fighter and one of the most dangerous fighters I’ve ever faced. The guys I’ve fought were very, very good fighters, very well rounded, but he just brings another aspect with the leglocks. He’s very dangerous at finishing fights and it’s gonna be a tough fight and I’m really looking forward to it.”

You wouldn’t expect such a cheery outlook from someone who needs that notch in the win column pretty bad, but Miller is a fierce competitor, and when you’ve got that mindset, a win over someone you’re supposed to beat doesn’t measure up to one over a fighter many believe is the favorite.

And as an added bonus, Miller gets to test out his Brazilian Jiu-Jitsu black belt in the home of the art against one of its top practitioners, a master of leg locks whose finishes on the ground have struck fear into many.

“You definitely have to stay on top of your game with him,” said Miller. “He’s very sneaky with his leg locks and he can come out of nowhere. You can never really relax with him. He can dive in on a leg and once he gets a hold of it, it’s really tough to get out of them.”

True, but as he points out, this isn’t a jiu-jitsu tournament; this is a fight, so there’s more on the table than just jiu-jitsu or leg locks, and Dan Miller plans on proving that on Saturday.