Welterweight Pulls Out All The Stops To Get Back In The Win Column Saturday
By Steve Latrell, on Twitter: @TheUFSteve • Aug. 20, 2021

However you slice it, Sasha Palatnikov will have a story to tell.

“This is probably going to be something I tell my grandkids,” he says, reflecting on the last year-plus. “This is such a crazy period in my life, going from protests in Hong Kong, having to move out to Las Vegas, COVID hitting, not sure where my career was going, signing with the UFC on short notice, having the debut that I had…these are all things I’ll never forget and I’m grateful to have experienced. I don’t think many people can say they’ve gone through that.”

No, they can’t. And the welterweight wouldn’t have it any other way.

“It’s built me as I am today. It’s made me a better person and a better fighter. Being able to adapt to all situations is something that I thrive in.” 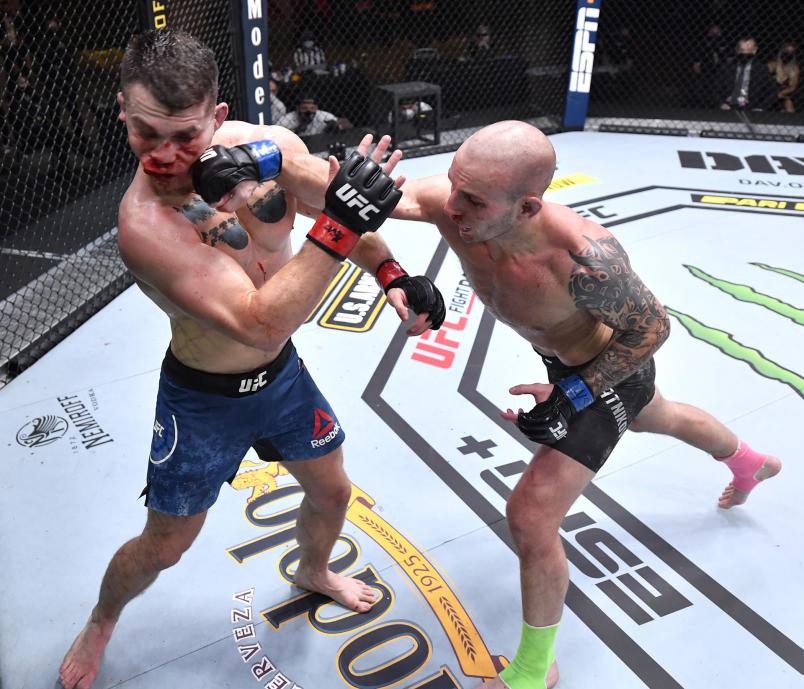 After his memorable debut victory TKO over Louis Cosce last November, the whirlwind continued last April with a submission loss to Impa Kasanganay. The irony that his loss came after a full camp and his win after just three-weeks’ notice isn’t lost on Palatnikov.

“That last fight was a new situation having to fight at 8:30 in the morning. Going into that fight, I felt amazing, to be honest with you. I have no excuses. You’ve got to perform when you’re in that cage. I just felt I was laggy and a bit slow in there. My body just didn’t acclimatize to the time. Maybe I was a little too confident coming off that first win. Credit to my opponent, he’s a tough guy. But I feel nine times out of ten I come out of there with my hand raised. It’s something where I just had to sit down and talk with myself and go over it mentally. Now that plate is clear. This camp has been great, and Saturday is going to be fun.”

Saturday is the day he opens the show at UFC Fight Night: Cannonier vs Gastelum in Las Vegas when he meets Ramiz Brahimaj.

“This time we’re fighting at 4 in the afternoon [Pacific Time], the same as my debut. My body is ready and primed. I’m not giving myself any excuses for this. I’m going to get back to myself and what people like to see. Hopefully on Saturday they’re going to enjoy that show.”

Hard to imagine that they wouldn’t. Despite having a doctor’s stoppage spoil his UFC debut last November, LFA vet Brahimaj is a known submission ace who is looking to make his own waves at 170 pounds.

“From what I understand, he’s a tough guy. He’s been out maybe a year, so he might have those nerves. I’m expecting him to shoot on my legs, most people do. I’m going to go out there and strike, put out my full arsenal which people enjoying watching. I’m ready to keep it standing but I’m also ready to go to the ground. Wherever it goes is where it goes, but I’m ready to put my hands on this guy.”

Palatinikov and his coach John Wood at Vegas’ Syndicate MMA have put the necessary work in to counter an opponent like Brahimaj, keenly aware of what lies ahead.

“We already know watching that last fight my opponent is going to think the easy way to victory is probably wrestle and take me down, get me to the ground. He’s a guy with lots of submissions. I welcome that. I’ve been putting in a lot of effort on my wrestling; a lot of grappling. Just continuing to do what I do. Frank Hickman came in from Thailand, he’s actually my roommate currently. He’s helped me a lot with my wrestling and improving all aspects of my game. I’m ready for anything presented to me in the fight.”

At age 32, Palatnikov already boasts one of the more unusual come-ups on the roster. A former pro rugby player, he proudly represented his native Hong Kong in any sport he touched in his youth.

“Being the first to represent Hong Kong in the UFC is a huge honor. I have so much support from back home and every time I step in that cage I just get so much love and support. It’s an extra energy. It’s another boost that gets me motivated to get in there and perform.”

The Best Finishes From Saturday's Fighters

It was Palatnikov’s parents that introduced him to martial arts as a child in an effort to quell some hyperactivity. So how are they feeling about that decision now that he fights at the highest levels of MMA?

“My mom doesn’t watch,” he laughs. “She’s like ‘I’m going to find out how you are afterwards.’ My dad is very involved in my career in terms of who I’m fighting and where I’m fighting. So he always gives me his two cents even though he’s like ‘I’m not your coach, but…’ He definitely gives me that outside perspective. He’s a former professional athlete, so he makes sure I’m on top of my stuff. They always push me to do well, and that’s all I could ask for.”