Sasha Palatnikov Is Back For More

Welterweight Looks To Capitalize On Momentum Of Standout Debut
By Steve Latrell, on Twitter @TheUFSteve • Apr. 9, 2021

Short notice debuts in the UFC are never what you would call ideal. Still, every once in a while, without the time to be anything but in the moment, the stars align and what happens in the Octagon is better than anything that might have happened with a full camp.

Such is the case with Sasha Palatnikov.

Called up on short notice to face Louis Cosce last November, Palatnikov put together a thrilling, bonus-worthy performance (detailed in the video on this page) that handed his opponent his first professional loss.

“It was a really great experience,” he recalls, “something I had envisioned for over ten years. It was everything I expected. Obviously, fighting under the conditions of no fans is a little bit different, but I took it all in full stride. It was just an awesome opportunity that I was given, and I took it with both hands. I wouldn’t change it for the world.

“Being officially signed to the UFC. Being the first fighter from Hong Kong to represent. All the love that I was getting from people all over the world. Being able to fight on such a big stage, put on a performance like that and receive a bonus was incredible.”

And is there something a little extra satisfying being the first man to beat Cosce?

"If I can lead that way and give them that hope that soon they will be gracing the Octagon."@PalatnikovMMA talks about being the first Hong Kong native to compete in the @UFC and how he hopes to be a pioneer for MMA in Hong Kong 🔊⬆️ #UFCVegas23 pic.twitter.com/qGavGLZ6vU

“Absolutely,” he smiles. “I’d seen some interviews when they were talking about Louis and he said that current UFC fighters were not taking fights with him. He was undefeated. He had seven finishes. But for me it doesn’t matter. I didn’t even know who the opponent was when my manager made the call to me. I just said, ‘Yes, let’s do it.’ Every fight is a tough fight in the UFC. We’re fighting the best fighters on the planet.”

Cosce didn’t make it easy, of course. Particularly in the early going, Palatnikov found himself in some pretty compromising places, teetering on the brink of disaster. He credits coach John Wood with helping him make adjustments between rounds.

“He was telling me I was a better technical fighter and I had to just be composed, do what I usually do, and that’s exactly what I did. [Cosce] came out, he rushed me and put that pressure on. But I was expecting that, anticipating that. I think the commentators did a great job of amplifying the situation. Honestly, I was composed in there, I was never hurt. I never felt that I was in any worry. Once I got my range and started doing my thing, the result unfolded.

“John Wood is an amazing coach. He’s been with me for over a year now. I moved here from Hong Kong and I was introduced to him. I came here with a knee problem, I had to have surgery. So John helped me transition, meet the doctors who got me set, fixed my knee and then he just took me under his wing and got me ready for this stage. I know I took it on short notice coming off of COVID, but his system and the way he trains and teaches us at Syndicate MMA is the perfect method to be ready when something comes on short notice.”

Mercifully, there’s nothing short notice about his next fight against Impa Kasanganay, which opens the show this Saturday for UFC Fight Night: Vettori vs Holland. Still, he hopes to retain some of the urgency of his debut. 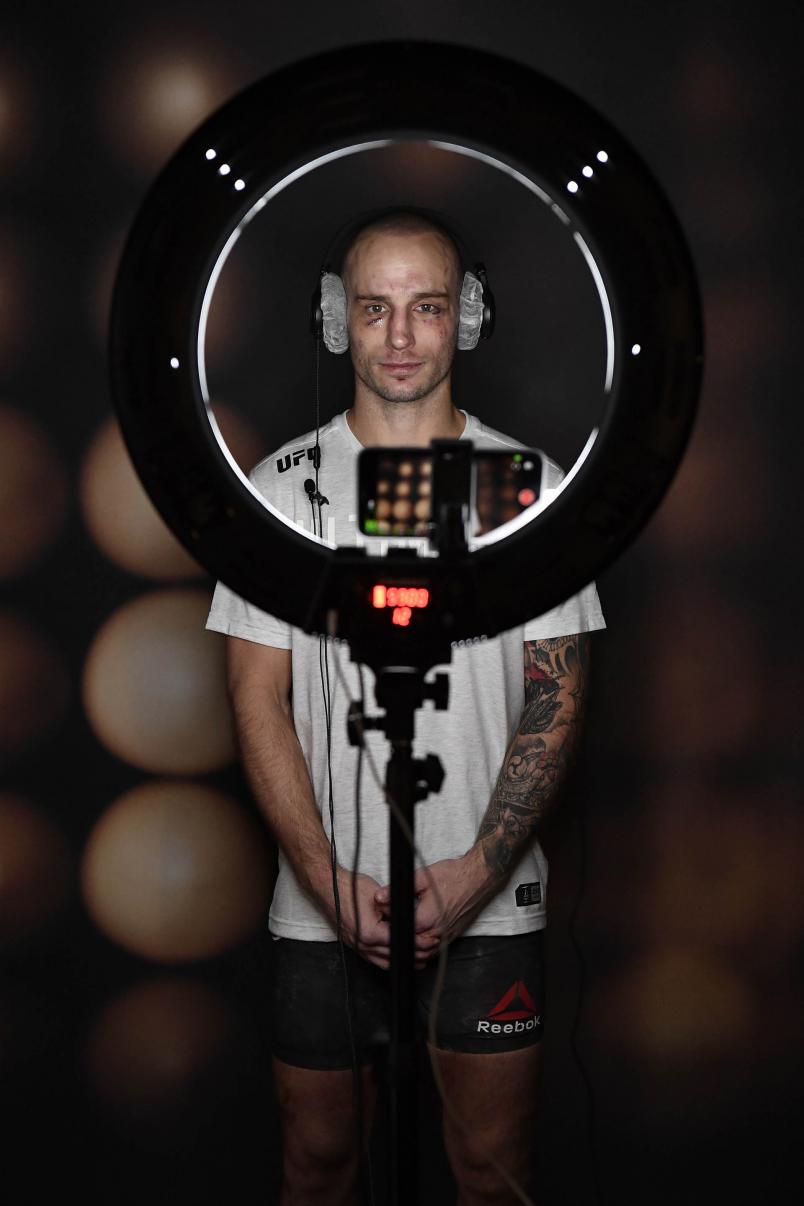 Palatnikov being interviewed backstage during the UFC 255 event at UFC APEX on November 21, 2020 in Las Vegas, Nevada. (Photo by Mike Roach/Zuffa LLC)

“Now with a full camp, I’m feeling really healthy, feeling strong. Impa is a great athlete. He’s coming down to 170, I’m welcoming him to the division. He’s never fought there. So it will be interesting to see how he is; how he looks coming in. But, at the same time, like I said earlier, this is the UFC. I only expect the best and that’s what I’m looking for. I want challenges. I’m a problem-solver. It’s going to be a back-and-forth battle, and I think he’s going to really bring it. I’m hoping to put on a fireworks show like we did last time. Everyone liked my last one and I think I can definitely surpass that and I expect to do that on Saturday.”

A 2-0 start in the promotion would be yet another twist-filled chapter in Palatnikov’s long, strange trip to MMA. The son of a professional high-diver, Palatnikov enjoyed a career in professional sports too—rugby—in his native Hong Kong. His pride in his heritage informs most everything he does.

“Being born and raised in Hong Kong, that’s home. I don’t know any other place. My schooling was there, I represented Hong Kong in rugby, basketball…everything.”

His parents were instrumental in getting him into martial arts at a young age, although not with any intention it would be a career.

“I was a very energetic kid. I had a lot of energy. My parents were told by a family friend that I should get into martial arts just to get me to sleep. They put me in karate at the age of five. I wasn’t a huge fan at the time, I got beat up a little bit. My parents forced me to keep going and I started to fall in love with the sport. I was a competitive karate athlete from the ages of about six to thirteen. Then I transitioned from that into more of a Muay Thai/kickboxing/boxing background. It was never like, ‘Oh, I want to be a professional fighter,” but it was something that I loved to do, and it worked out in the end.”

It certainly did. But even in all those years of training, martial arts was something he did when team sports seasons were over. From afar he admired combat sports stars like Mike Tyson and Fedor Emelianenko, but it was during a college stint in Montreal that things began to change. That was when he first saw Georges St-Pierre. Like many a fan and fighter before him, GSP was the turning point.

“That’s what opened the door,” he says.

And at just a mere eight fights into his pro career, Palatnikov’s dream is that he will similarly open doors for the next generation of mixed martial artists.

“MMA isn’t a big sport in Hong Kong, so to be able to kind of be the pioneer and fly that flag…there’s a lot of young and up-and-coming talent that’s now coming up through the ranks. If I can lead the way and give them that hope that soon they’ll be gracing the Octagon, that’s been a big dream of mine. Coaching, developing youth, and passing the torch, that’s something I’ve always wanted to do.”