Sarah Kaufman - Not About to Let This Opportunity Slip Away 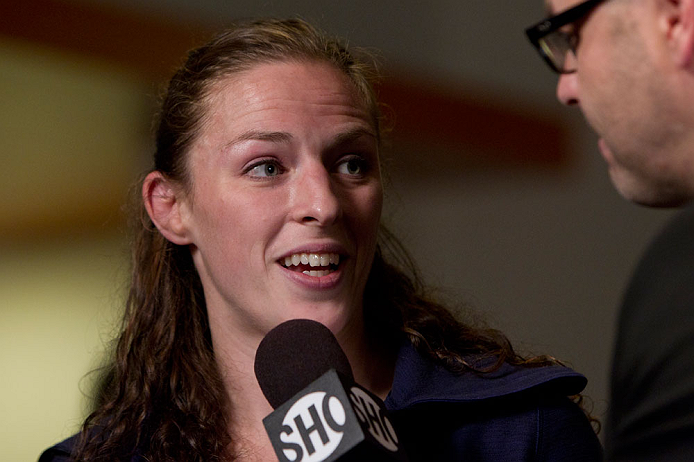 It was nice to see Sarah Kaufman get a little bit of the limelight at UFC 149 in Calgary last month. Interviews, some Pay-Per-View camera time, and plenty of attention from autograph seekers, it was all deserving for the former Strikeforce women’s bantamweight champion in the lead-up to her attempt to regain the belt this Saturday against Ronda Rousey.

But not surprisingly, her mind was initially elsewhere before warming up to the occasion.

She also got a taste of how big of a deal this fight is. Sure, every fight is big to those competing in it, but when you realize that the rest of the world is paying attention as well, that adds a little something in terms of anticipation.

“The hardcore fans knew about me a long time ago and they knew that I should be fighting (former champion) Miesha (Tate) and they saw how Ronda took over, so they’re really interested to see how this fight goes,” said Kaufman, who saw an expected title shot get sideswiped by the Rowdy Ronda Express in March. Rousey took the belt from Tate, and Kaufman, after defeating Alexis Davis on the same card, gets her shot this weekend in San Diego. “It’s kind of like the newcomer versus somewhat of a veteran and the striker vs. the judoka, and there are so many avenues that they can take a look at and really sink their teeth into. So a lot of people are excited to see if the Ronda hype train’s gonna be gone or if it’s gonna be there still after the fight’s over.”

You probably know what camp Kaufman is in at the moment. And she’s got every right to be confident. Winner of 15 out of 16 pro fights, with 10 of those wins by knockout, Kaufman’s record is dotted with a Who’s Who of women’s MMA, including Miesha Tate, Shayna Baszler, Roxanne Modafferi, Liz Carmouche, and Megumi Yabushita. Her only pro loss came in 2010 to female MMA pioneer Marloes Coenen, and she has won three in a row since that bout. Yet despite that resume, the win which may be the most important to her quest to regain her title is the one against another big name in the sport, fellow contender Davis.

In their March rematch (Kaufman stopped Davis in a 2007 bout), the two Canadians did themselves, their country, and their sport proud with an epic three round battle that many observers (including this one) tabbed as the greatest fight in female MMA history. Victoria, British Columbia’s Kaufman knew they were on to something big early on.

“You know that it’s an exciting fight because it’s back and forth, and I cut her early and then she got a little cut on the top of my head, so we’re both bleeding, and it’s a striking, fast-paced action fight,” she said. “You know that’s something that the crowd’s behind and you can hear that they’re behind it.”

When it was over, Kaufman took a well-earned three round majority decision win, but the fight meant so much more to the 26-year old than just another victory.

“I think it was a really positive thing in my career for a bunch of different reasons,” she explains. “I’ve had a lot of fights that have gone the distance, and not because I’ve wanted them to, but because my opponent wasn’t fighting to really win, but they were fighting to not lose, in my opinion. And for that reason I wasn’t able to finish them because I felt like I couldn’t overcommit because if I overcommit, they’re so hypervigilant when it comes to what they’re doing that they don’t want to get caught with something. But with Alexis, she came in and she was there and she was standing and it was a really exciting fight to be in as a fighter because I haven’t had a fight like that in a really long time, if ever. It gives you confidence, knowing that you can go that hard pace for the full time, and things happen your way, they don’t happen your way, you make mistakes in the fight, but at the end of the day, it’s a memorable fight, so people saw that fight and said ‘yeah, this is a great fight.’ Those are the fights, like a Stephan Bonnar-Forrest Griffin, that they get behind because it’s a first for something that they haven’t seen before.”

It’s something Rousey certainly hasn’t seen before. In three amateur and five pro bouts, the champion from California has ended each fight the same way – submission via armbar in the first round. Against Tate, she went 4:27, the first time she went past a minute in a fight, but the result was the same, and maybe even more emphatic since she dislocated her opponent’s arm in the process. But if Kaufman’s intimidated by the “arm collector,” she hasn’t shown it, and if anything, the war with Davis has built her resolve even more.

“The disadvantage that Ronda has is the fact that she has only fought in the first round and that’s it,” said Kaufman. “She hasn’t even gone into the second round, and I’ve been there, so I understand the mental part of things when it comes to ‘okay, the fight hasn’t gone how I anticipated it would,’ and in your head, you only think ‘oh well, the fight could go the full distance, but I’m used to ending in the first round, and all of a sudden it goes to a second round and a third round,’ and those doubts start to creep in, and after a while, you’re not being successful. And I’ve been there and I’ve done that and I’m ready to do it again to get that title back.”

Yet while the armbar is always lurking in the picture, Kaufman believes that her own not-so-secret weapon – her striking and knockout power – may be not only the equalizer, but the key to her taking her belt back.

“I think the fact that Ronda initially called out Miesha and wanted to fight her first, she knew that she didn’t have that challenge on her hands of having a strong striker who hits hard and who is relentless and is going to keep coming back and isn’t going to be a pushover,” she said. “And I think that’s why she wanted the Miesha Tate fight first, because she thought she had a better chance of getting more comfortable getting hit. I think I’m in her head a little bit when it comes to striking. She doesn’t know what to expect. She knows she’s going to get hit, but it really is different with the small MMA gloves and somebody coming at you, rather than in sparring, when it’s generally boxing gloves and you’re with people you know.”

So what about Ronda getting into her head with her brand of bold statements and trash talk? Kaufman said it’s not happening.

And Saturday night’s should be a good one. So good, that Sarah Kaufman believes she will be back on the mountaintop as a world champion. She’s kind of missed that title over the last couple years.

“I think the confidence that you’re number one and you’re number one for a reason, that you’ve worked hard to get there,” she said when asked what she misses the most about being the champ. “And everything that you’ve done up until that point has led to such a beautiful and powerful statement that you are the champion and you are the one to beat. And I want to be that one to beat.”