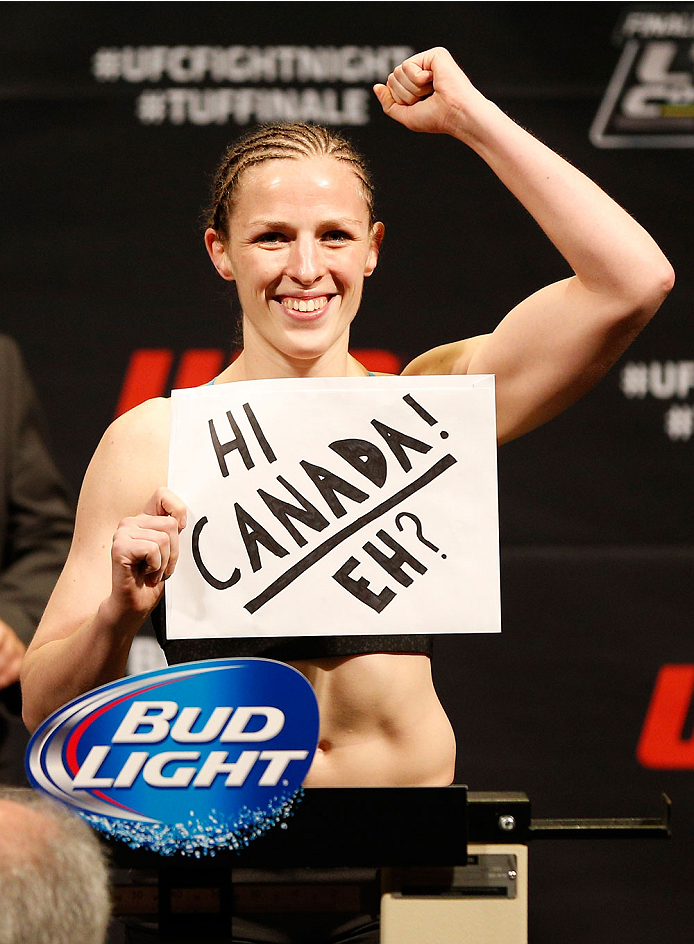 Given the intense and bloody battle Sarah Kaufman and Alexis Davis went through in their 2012 Strikeforce rematch, don’t expect Kaufman to be too jazzed about a repeat this Saturday in Montreal.

“You’re probably not going to recreate what’s already happened, and I’m hoping to not recreate it, in the sense of I’d like to do things even better than I did last time,” Kaufman said of her UFC 186 meeting with Davis, who she is already 2-0 against. But then again, when Ontario’s Davis meets British Columbia’s Kaufman, fast-paced action is a given.

“I always think that I try and bring an exciting fight, and Alexis is very talented on multiple levels,” Kaufman said of her friendly rival. “She’s coming in with a lot to prove after just coming off a loss against Ronda (Rousey) and also already coming in 0-2 in the fights that we’ve had. And I’ve got a lot to prove. Already being 2-0 in the fights we’ve had is a lot of pressure because she’s not an easy opponent and, on paper, it should be ‘oh, well you’ve already won twice, who cares.’ But I think that we’re both coming in to bring those fireworks and it’s likely going to be a pretty exciting fight.”

There should be no one complaining about seeing Kaufman and Davis fight a third time, or a fourth, fifth or sixth. Stylistically, the two top bantamweight contenders are a perfect match, and even though Davis sits at number three in the 135-pound rankings, with Kaufman at number five, some did wonder if it was time for a third bout, especially Kaufman.

“When I was first told about it, definitely,” she said. “I’m not going to pretend that I was excited to be fighting Alexis for a third time. I think a lot of people don’t see rematches as useful unless if it’s for a title or if something happened that led you to this pinnacle of ‘you guys have to fight again because there’s no one left to fight.’ I think at those times, rematches are a bit different. But just to have a rematch because there’s no one else for you to fight, I can’t say that I was the most excited to get the call. But that’s the past at this point. It’s a fight, it’s a tough fight, and so now I’m not at that point. This deserves to be hyped and featured. Ranked number three and number five in the division and having had such exciting fights in the past, there’s no reason it shouldn’t be hyped and shouldn’t be featured.”

She’s right, and don’t blame UFC matchmaker Sean Shelby for the match because a) You’ll probably be thanking him on Sunday morning, and b) No one is exactly lining up to fight Kaufman, who returns to the Octagon after a year away spent healing injuries sustained in a May 2014 car accident.

“It’s so frustrating,” she said. “This is a game of putting yourself on the line with each and every fight, and the females who aren’t willing to do that, are you really a fighter then? If you’re not willing to take this fight because you want to pad your record or want an easier fight or whatever your idiotic reasoning is, you’re in there to fight. Yeah, I’m gonna hit you in the face, and I have my wrestling, I have my grappling, I’m a brown belt in Brazilian Jiu-Jitsu, and I’m not a pushover fight for anyone. And because the ladies know that, I don’t get those opponents because they say no. I never say no. The only time I did was when I had a car accident and couldn’t take a fight. Of course you want to have the fights that are best for you that are going to showcase your skills. But I guess all these ladies know they can’t showcase their skills versus me, and so they’ve said no and cautiously avoided bringing me up and then pushed for other fights.”

The reason for steering clear of the 29-year-old from Victoria is simple – she’s one of the best 135-pounders in the world, a former Strikeforce champion with a victims’ list that includes Davis, Liz Carmouche, Megumi Yabushita, Roxanne Modafferi, Shayna Baszler, Valerie Letourneau and Miesha Tate. Yet since moving to the UFC, Kaufman has only fought twice in the Octagon, engaging in a UFC 166 bout with Jessica Eye won by Eye via split decision before being overturned to a no contest, and in an April 2014 rematch with Leslie Smith, who she defeated via unanimous decision. That means not enough fans are in Team Kaufman’s corner, which equates to her being too much risk for too little reward.

But now that Kaufman is healthy, if she can beat Davis and stay busy, she might be able to shoot into the title picture and secure a rematch with Rousey, who beat her via submission in 54 seconds back in Strikeforce in 2012. Three years is a long time, and while Kaufman respects Rousey, she also believes there would be a different result in a rematch.

“Oh absolutely,” she said. “I think there should have been a different result the first time around, but Ronda has been impressive. You can take nothing away from what Ronda has done in the cage. She has this mental ability to just be like ‘I’m gonna do this,’ and then it happens. Her last fight with Cat (Zingano), she made some crazy transition, so you can’t take anything away from that, but I’d be lying if I said that I don’t think I have the skills to beat her.”

Will she get that rematch? Kaufman knows there’s some work to be done, but she’s willing to do it.

“I’d love to get that opportunity, but I am aware that I’ve had a slow couple of years – not really by choice – it’s just how the cards have fallen for me,” she said. “But I would like to be as active as possible. For example, since Miesha lost her last fight to Ronda, she’s had three fights, and in the same time, I think I’ve only had one. So I want to be in a position where I can rack up these wins, be comfortable in the cage, and I feel like I am, and just get that momentum and confidence building.”

It all starts on Saturday night.

“This fight to me is my showcase fight,” Kaufman said. “In my head, we’ve never fought before, and I’m coming in to prove why I deserve to be ranked number one and have the UFC title belt around my waist.”