"I want to fight bigger and better people, and I want the UFC belt. That’s where I want to be and that’s the goal that I want to
achieve." - Sarah Kaufman 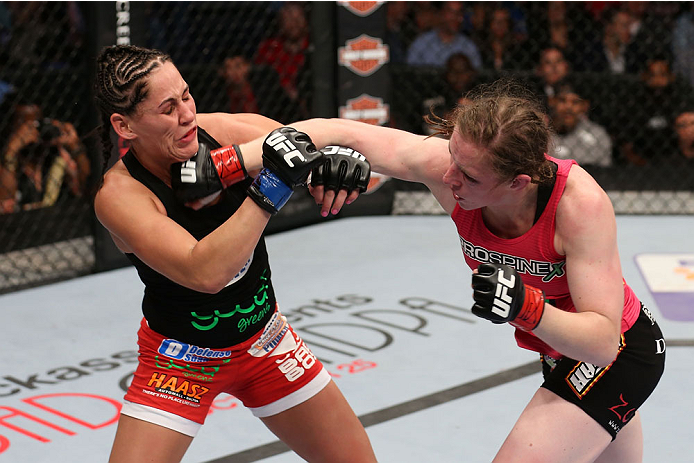 Sarah Kaufman was philosophical in discussing 2013, a year in which she went to hell and back with Leslie Smith, saw her UFC debut against Sara McMann called off, and then lost a controversial decision to Jessica Eye that was later changed to a no contest.

“2013 was a big year for women’s MMA, so just being a part of that prior to, as well as in, that year is a big step forward,” she said. “That being said, I didn’t have enough fights, and I would have loved to have fought better, especially with the outcome of the Jessica Eye fight. But I didn’t feel like I lost the fight. I can’t even be upset with my performance because it was a winning performance in my eyes, and, not to come off whiny or anything like that, but just in terms of how my psyche feels about the fight, I don’t feel like I lost. But I’m just really excited that that’s all in the past and this is the next step. I’m really excited to be fighting in Canada.”

Kaufman, a native of Victoria, British Columbia, will be fighting in Canada on Wednesday. That’s the good news. The bad news is that after all her optimism that the madness of the past is in the past, she kind of jinxed herself.

Initially scheduled to face Shayna Baszler in a rematch of their 2009 Strikeforce bout, Kaufman instead got matched up with Brazil’s Amanda Nunes when Baszler pulled out of the bout due to injury. Then Nunes was forced to the sidelines, with Kaufman’s old rival Smith coming back into the picture for a rematch of an Invicta Fight of the Night bout the Canadian eked out via split decision. It’s far from an ideal turn of events, but as an eight year pro, Kaufman is used to a few roadblocks on the way to fight night.

“You have to take things in stride, which is something I’ve known throughout my MMA career,” she said. “That is part and parcel to the sport. There are politics and unfortunate events, things that go your way and don’t go your way, and you take it in stride and know that you’re doing it because you love the sport and try to let all those other things step out of your mind and allow you to focus on the good things that are happening.”

The good things are that she’s got the MMA equivalent of a home game this week, she’s had a full camp while her opponent didn’t, and with a win, she will be back in the race for a shot at the bantamweight title.

Heading into her UFC debut against Eye last October, Kaufman had won four of her previous five bouts, with the only loss coming in Strikeforce to current UFC champ Ronda Rousey. And while many believed she did what it took to beat Eye at UFC 166, the judges disagreed.

“You never want to leave it to the judges,” said Kaufman. “Unfortunately, sometimes you have to, but it’s also an eye opener to just not give up any seconds in a fight and be a little bit more present the whole time. That’s always something I’m thinking about, but even more so now that I’ve been through that experience.”

Kaufman was understandably disappointed with the outcome, yet she still showed her characteristic class following the verdict. But as she posted blogs about the fight, you could clearly read between the lines and tell that this one burned her.

“It did for sure,” she laughs. “Had it been a split decision and we didn’t know what the judges’ scorecards were and you thought ‘okay, well two of them gave her the first and second and they all gave me the third,’ that would have been different. But when it came out that one of the judges gave her the third, to me that’s so wrong. She (Eye) was going on, saying ‘I won the first two and definitely got beat up in the third,’ and then she’s going on to me on Twitter, saying ‘you need to not say anything because I won that fight.’”

The former Strikeforce bantamweight champion definitely wants another crack at Eye, even with the bout’s result being overturned to a no contest after a positive post-fight drug test by Eye, but for now it’s Smith, and more importantly, a desire to make sure there are no doubts in her fights.

“Some people are inherently very tough, and you try as hard as you can and you can’t get that finish,” said Kaufman. “But I don’t think I tried as hard as I could in the Jessica Eye fight right from the get go. I think I laid back a little bit too much, and had I done in the first and second what I did in the third, I have no doubt that that fight would have been over. Again, that experience of seeing how things are going and almost being too calm is something that I’ve tried to address with my camp. But at the end of the day, you’re going to fight how you’re going to fight, and you have to be cautious because everyone you’re fighting is good, but you can’t be too cautious because that gives them an opportunity to do better than they should.”

It’s a fine line to walk, but in showing herself to be one of the top 135-pounders in the world, she’s been able to walk it better than most.

“There’s a balance,” she explains. “You want to expend enough energy that you’re pushing that pace and you’re controlling the fight and you’re doing everything you can to win at that moment, but you also have to trust that your training and your conditioning is going to be behind you. I’ve never been worried about my conditioning in a fight. I’ve never consciously thought ‘oh, I should slow down a bit because I don’t want to get tired.’ That’s a product of my training itself, that it allows me to not be so conscious about what time is going by, and I’m performing in trying to finish the fight. I know that I have the conditioning to keep that pace, and I want to push a faster pace.”

For proof, just look back to her 2012 rematch with Alexis Davis, one of the great fights – male or female – that you will ever see. Yet when she talks about the fight, which she won by majority decision, she says that there was still some gas left in the tank at the end of 15 grueling minutes.

“In that fight I still think that I could have done more, and I think that that’s a good thing,” said Kaufman. “I always have confidence in what I’m able to do and in my conditioning and my team, and then sometimes in fights, it’s not that you’re not giving a hundred percent, but it’s somewhat of that cautious side, and I don’t know if this is a good thing or a bad thing, but at the end of a fight, I’ve never felt like ‘oh my gosh, I couldn’t go a second more.’ I think that’s a good thing because you want to be tired at the end, but not sloppy. But there’s also something for a fight that’s a war like that, where you should feel like you can’t stand up after. So knowing that I’m capable of that, but still knowing that I’m capable of more than that is a really good thing for me. It’s knowing that I can keep the pace, that I can push, that I can throw hard and still come out on top, and it’s definitely something that should give me that extra confidence to continue to fight like that and get better with every fight.”

Now all she needs are some fights to prove it.

“In my head, I won two fights in 2013, but I want to fight bigger and better people, and I want the UFC belt,” she said. “That’s where I want to be and that’s the goal that I want to achieve.”