"It’s probably not a great part of my personality, but I’m a vengeful person. When I lose, I want to settle the score." - Sara McMann 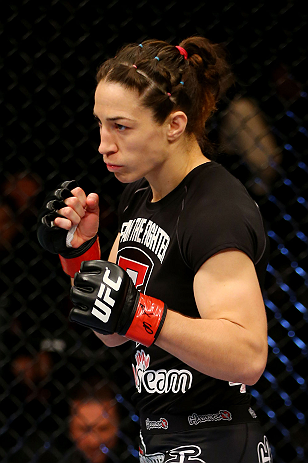 When the UFC introduced the women’s bantamweight division into the fold in early December 2012, one potential fight stood out for many fans – a pairing of the weight class’ two Olympians, Ronda Rousey, who captured a bronze medal in judo during the 2008 Summer Games in Beijing, and freestyle wrestling silver medalist Sara McMann, who stood on the podium four years earlier in Athens.

Though Rousey’s first order of business would be defending the newly created UFC women’s bantamweight title against Liz Carmouche and McMann was just six fights into her career, the idea of a pairing between two legitimate world-class athletes inside the Octagon was tantalizing and seemed like an inevitability.

McMann signed with the UFC the following February and earned a first-round stoppage win over Sheila Gaff in her organizational debut two months later at UFC 159. She was scheduled to face former Strikeforce champion Sarah Kaufman in September 2013, but was forced to withdraw due to undisclosed personal reasons.

After earning her seventh consecutive first-round armbar victory over Carmouche at UFC 157, Rousey ended up positioned opposite her chief rival, Miesha Tate, as coaches on season 18 of The Ultimate Fighter, with the two set to clash for a second time at UFC 168. While the fight lasted into the third round, the outcome was ultimately the same as the undefeated champion added another submission win to her resume.

At the post-fight press conference, UFC President Dana White hung a fight poster on the front of the podium. The smoky, blue and black poster showed Rousey with a look of determination on her face, McMann’s visage creeping out of the hood that covered the champion’s head.

One year less a day after Rousey successfully defended her title against Carmouche in the first ever women’s bout in UFC history, the two would clash in the main event of UFC 170, which just so happened to take place the day before the closing ceremonies for the Winter Olympics in Sochi, Russia.

The highly anticipated matchup was expected to be the toughest test of the dominant champion’s career. It ended in just 66 seconds.

After a flurry of activity to begin the fight that saw both fighters land some clean shots, the two clinched along the fence, Rousey controlling the action with an overhook that left the right side of McMann’s body exposed. A flush knee followed, sending McMann to the canvas, clutching her midsection. As Rousey looked to follow up with strikes, referee Herb Dean stepped in to wave off the contest.

Over the last five months, the 33-year-old contender has spent a great deal of time looking back at her performance. Analytical by nature and holding a Master’s degree in mental health counseling from Gardner-Webb University, McMann wanted to retrace her steps and the preparation that came before the contest in order to figure out what went wrong.

Despite her obvious disappointment in the result, her conclusions are somewhat comforting and she’s able to joke about the outcome as she prepares to return to the Octagon against newcomer Lauren Murphy next week in Bangor, Maine.

“I think because of counseling, I really look back and analyze what factors might have led to one thing or another thing - going through a checklist of what I need to have a great performance. I don’t find any holes as far as having good energy, a good weight cut, low stress level. I was enjoying (the week). That didn’t have any bearing (on the result).

“If I’d have gotten armbarred, I would have been really pissed,” she adds with a laugh. “I just got caught in a bad position. You can’t control all factors of a fight, so now I just have to be smarter about not letting myself get in those kinds of positions again. That’s what you do with sports – you make mistakes and you learn from them.

“I would be a lot more stressed out if my mentality was really the problem in that fight. I would much rather have a physical problem like `Oh, you need to be in this position to win the clinch or avoid a knee.’ Working on technical moves is an easy solution, but when you have something going on mentally, that is something you have to work your entire life on, so I’m very relieved about that.”

In addition to reviewing her preparation and performance opposite Rousey in the time since their meeting, McMann has also been focused on charting the shortest path to a rematch with the reigning champion.

Back in May, her manager, Monte Cox, told UFC Tonight that McMann was eager to get back into the Octagon and that she was hopeful that her scuttled showdown with Kaufman could serve as her return bout.

“I didn’t specifically target Sarah Kaufman by herself,” McMann clarifies. “I made it very clear to my manager and he made it clear to (UFC matchmaker) Sean Shelby that I’m interested in fighting a Top 10 fighter.

“At the time, Sarah Kaufman was really the only option because there were some girls that had injuries or were already committed to different fights. I had some younger girls or Sarah Kaufman, so I was like, `I’ll take the fight against Sarah Kaufman.’”

Much to McMann’s frustration, the Canadian, coming off a unanimous decision victory over Leslie Smith in April, had her sights set elsewhere before being forced to the sidelines in early May. Thankfully for McMann, Murphy stepped up.

Murphy cut her teeth fighting in Alaska, earning her first four victories in “The Land of the Midnight Sun” before ultimately signing with Invicta FC. Following consecutive unanimous decision wins over Kaitlin Young and Sarah D’Alelio, the 31-year-old became the promotion’s inaugural bantamweight champion back in December, pushing her record to 8-0 with a win over Miriam Nakamoto when the standout kickboxer suffered a knee injury early in the fourth round of their championship tilt.

Now she’ll step in with the Olympic medalist, who is both pumped up for the opportunity to face the talented UFC neophyte and impressed with her opponent’s readiness to jump into the deep end of the division’s talent pool right out of the gate.

“I was extremely excited that Lauren Murphy decided to say, `Yeah, I’ll take that challenge.’ I think it’s awesome that she’s ready to step in and fight whomever. That’s a great attitude to have, in my opinion.

“Whenever you’re presented with a fight, you can kind of turn away from it and say, `I’m going to do these other things. I’ll be ready in a couple months.’ You can tell yourself that or you can say, `I’m going to accept this fight and I’m going to make myself ready and if I’m not ready, back to the drawing board. Maybe I have a little but more than I thought to work on.’

But McMann doesn’t see her matchup with Murphy as a coin flip. Coming on the heels of her first professional loss, this is a chance to make a statement and the first step on the road to another shot at Rousey.

“I’m not at all overlooking Lauren Murphy – I know that fighting her and winning with authority is a very solid step in my road back. She’s very tough, she’s the Invicta champion and I’m ready to go out there and show all the skills that I have.

“I want to get back and get another title shot.”