Sara McMann: Always Up to the Challenge 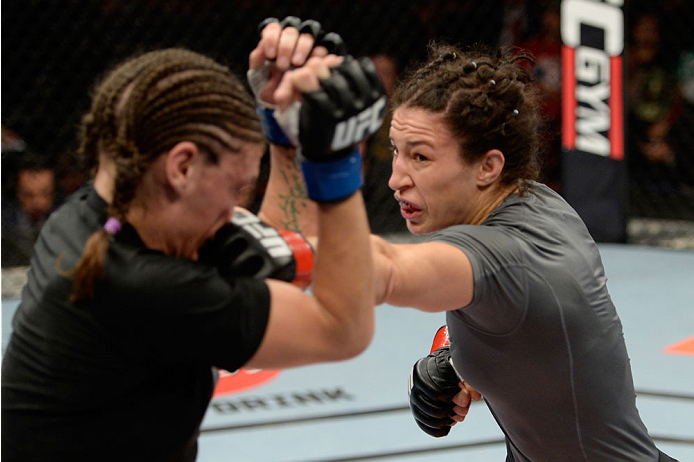 There is starting out at a high level of competition and then there is being thrown to the proverbial wolves. Olympic silver medalist Sara McMann had been facing the best the world had to offer on wrestling mats around the globe, and when she decided to dedicate herself to becoming a mixed martial artist, a similar path was in her immediate future.

There would be no easy road for McMann to get a feel for things. Instead, her credentials and reputation for being a gritty competitor preceded her and the potential for her to quickly become the next big thing in women’s MMA hovered above. The Maryland native rolled through her first six opponents, which included a collection of seasoned veterans the likes of future Ultimate Fighter alums Tonya Evinger and Shanya Baszler, until she received the phone call to compete on the biggest stage in MMA in 2013.

One win inside the Octagon would thrust her into the biggest fight of her young career against dominant champion Ronda Rousey, as the battle of Olympians ramped up behind the push of the UFC’s promotional machine. And even though Rousey picking up the first-round stoppage at UFC 170 was deemed questionable throughout the MMA community, the loss brought a sour taste to McMann’s mouth and it was a stark reminder of just how much she hated the feeling of being bested.

It drove her back into the gym and to a hard fought split-decision win over Lauren Murphy in her next outing at Fight Night: Bader vs. Saint Preux. While it wasn’t her best performance to date, it was enough to get the job done, and put the 29-year-old grappler back into the hunt for the bantamweight title. Yet, the bout with Murphy did give the surging contender more live experience, and the opportunity to examine and address the things she needs to improve upon as her career progresses.

“I felt really frustrated in that fight,” McMann explained. “I felt like I was getting slowed down and gummed up in the fight where I couldn’t open up and really execute as much as I wanted to. I felt much better on my feet, but there were a couple times on the ground where my gloves got stuck underneath her. Things like that frustrated me and the sand on the mat didn’t help either.

“I like how I’m progressing and wish I could fight more often because every time I get out there it shows me more things I could tweak and improve upon.”

When a fighter is within striking distance of a championship opportunity, there are only going to be big fights on the docket, and it was no surprise she drew another recognizable commodity for her next showing inside the Octagon.

The Revolution MMA representative will square off with former Strikeforce champion Miesha Tate at UFC 183, in a bout that will serve to knock one of them out of the title race for the foreseeable future. “Cupcake” got off to a rough start under the UFC banner - losing back-to-back showings out of the gate - but has found her groove as of late with wins in her two most recent bouts. Nevertheless, the ranks of the women’s bantamweight collective are growing more and more competitive, which leaves little room for error if a fighter has championship aspirations.

McMann thrives when competing with the stakes at their highest, and she’s expecting the bout against Tate to bring her very best.

“Pretty much since I started, every learning curve I’ve had has been in front of the entire world,” McMann said. “That’s okay though. I really don’t mind because I’m not the type of person who looks at things like I have to be perfect. I don’t mind that entire process. Every time I go out there I find things I can grow and improve upon. Win or lose, we are still coming out of the fight, sitting down and analyzing what I could have done better. But that is what I really enjoy about athletics anyway.”

While McMann has more impressive credentials in the wrestling department, Tate is no slouch where grappling is concerned. The former title challenger has the utmost confidence in her skill set, and has proven that by her willingness to take fights into close quarters against dangerous finishers such as Cat Zingano and reigning women’s 135-pound champion Ronda Rousey.

Yet, where Tate has suffered setbacks for her approach in certain matchups, McMann fully believes the Washington native will come out looking to put her on the canvas. McMann’s outstanding wrestling pedigree would force other fighters to take a different path, but she thinks her lofty accomplishments in the wrestling world won’t dissuade the Xtreme Couture fighter.

McMann sees Tate coming right after her and it’s an approach she is excited about.

“I’m expecting a lot of transitions in this fight with Miesha,” McMann said. “She’s been able to blend things very well and that is one of her strengths. That’s something I’m very excited about because I think there will be a lot more scrambles, whereas my last fight there was a lot of walking down. We both go after things and are aggressive and the natural matchup of our respective styles is going to create a lot of action. I love that because I thrive in the scrambles. I love things to be moving because that’s how it was in my wrestling career. I’m really excited for this fight.

“I know that regardless of any game plan that I have, it is unbelievably difficult for me to get close to somebody and not take them down. It really is so difficult for me, but I’ve been working on it. I’ve learned to be a bit more selective and take it when the moment is right and not just because I can. I think Miesha is going to try to wrestle me because that’s what she’s good at. She came out and tried to take Cat Zingano down right away and Cat is a good wrestler. I hope she comes out shooting because it’s something I’ve always been good at handling.

“I will also be shooting…even if it’s not in my game plan,” she laughed. “I think this will be an interesting fight whether it is on the feet or the mat.”

Should McMann find success over Tate at UFC 183, she believes it will provide the perfect platform for what she wants next inside the Octagon. While her first bout with Rousey didn’t pan out anywhere close to what she had hoped, McMann is a quick learner and took a lot from that experience. She wants another go at the “Rowdy” one and beating Tate will give her the right amount of spotlight to ask.

“A win over Tate in this fight gives me the chance to tell the UFC to give me another title shot,” McMann said. “That last one didn’t display the skills I have and show what I’m truly capable of. I believe I am the person to beat Ronda and want them to put me against her again. I’m stronger, better, faster and more aware than I was the last time that I fought her and really want the chance to do it again.”