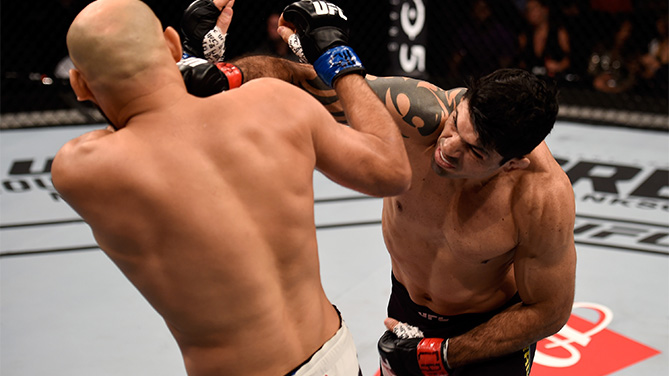 Russian welterweight Gasan Umalatov got going a little too late in his UFC Fight Night prelim bout against Viscardi Andrade on Saturday, with Sao Paulo’s own Andrade able to ride an early lead to a unanimous decision victory at Ginásio do Ibirapuera.

With the crowd cheering his every move, Andrade, who had been out of action since February of 2014, gave them plenty of reason to get excited, as he outworked the fairly passive Umalatov at every turn in the first round.

Umalatov began the second a little more aggressively, but that was only a brief burst of activity, as he soon settled back into his role of ineffective aggressor, allowing Andrade to take another round behind a varied array of strikes.

A spinning heel kick to the head by the Russian got the final round off to a good start in the third, as Andrade backpedaled to clear his head. Umalatov kept the pressure on throughout the frame, rocking the Brazilian again in the closing seconds, this time with a right hand, but Andrade was able to survive and pick up the decision win. 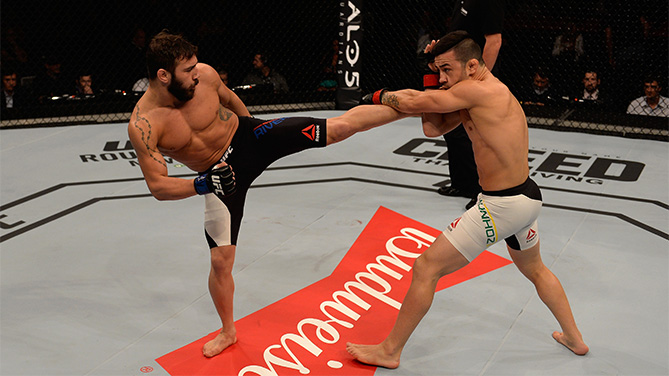 Whether leading or countering, Rivera’s striking was on target throughout the opening round. Munhoz did land a hard elbow and an equally jarring knee that opened a cut over Rivera’s left eye later, but it wasn’t enough to take the frame.

Both fighters were in trouble early in round two, Rivera landing a hard left and Munhoz a right, with each bantamweight staggering briefly. Munhoz’ right hand again rocked the New Jersey product in the third minute, but the subsequent guillotine choke attempt came up short. Regardless, the Brazilian’s work rate was increasing, allowing him to even up the bout.

The final round was difficult to score but fun to watch, as Munhoz was busier in the first half of the frame, but Rivera came back with some flush shots and delivered a strong finish that ultimately proved to be the difference in the fight. 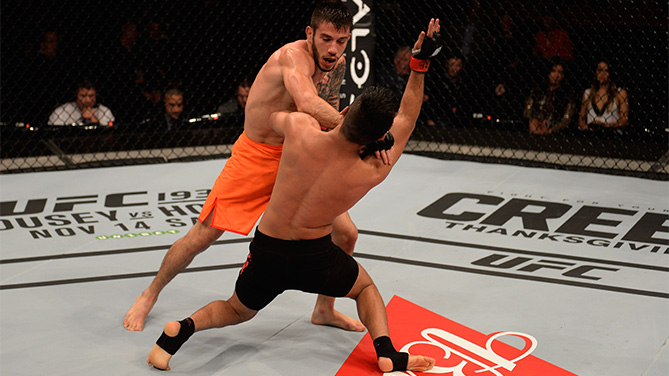 Rio de Janeiro newcomers Matheus Nicolau and Bruno Korea were teammates on season four of The Ultimate Fighter Brazil 4, but they put their friendship aside for 13 minutes and 27 seconds in the bantamweight opener, Nicolau winning via third-round submission.

The 22-year-old Nicolau had a dominant first round against his former Team Shogun squadmate, scoring with several hard left hands, including one that dropped his foe midway through the round, and two takedowns in the final minute only added to his points total.

The left of Nicolau kept finding the mark in the second round, but a spinning kick by Korea at the three-minute mark produced a knockdown and evened the score for a moment. Nicolau nearly ended the fight from his back though, as he locked up his opponent’s arm. Korea patiently worked his way free and remained on top for the rest of the round.

With the result possibly up for grabs, Nicolau broke the fight open in the second minute of the final round, with a right hand putting Korea down hard to the canvas. Korea, now bloodied, weathered the follow-up barrage, but shortly thereafter, a choke ended matters via tap out at 3:27 of the third frame.