DEREK BRUNSON VS LYOTO MACHIDA
Derek Brunson is probably the last guy someone coming off a two-year layoff would want to face. But then again, the aggressive striking and intense rushes that make Brunson so dangerous has always been what played into the patient counterstriking style of Machida. So will Brunson lay back and let Machida come to him, or will he blitz and dismiss “The Dragon” early? This is a chess match that will likely end in a sudden manner.

DEMIAN MAIA VS COLBY COVINGTON
Rising welterweight star Colby Covington has been a one-man promotional team heading into his co-main event against Demian Maia, but there will be two fighters in the Octagon Saturday night for what is a pivotal bout for both men. Maia, who is coming off a title fight loss to Tyron Woodley, can’t afford a second consecutive loss if he wants to get back into the championship mix, but Covington has just as much to lose, as he’s talked so much that he just has to back it up now.

PEDRO MUNHOZ VS ROB FONT
Two up and comers ready to make that move into the top 10, Pedro Munhoz and Rob Font finally get their dose of the spotlight this weekend, and this should be a good one. Munhoz is a grappler who can strike, and Font is a striker who can grapple, so the winner of this bout should be the fighter who is more successful in his second favorite place to fight.

FRANCISCO TRINALDO VS JIM MILLER
On a card full of Fight of the Night candidates, this may be my favorite because it’s a couple of no nonsense veterans just getting down to business for 15 minutes. Francisco Trinaldo and Jim Miller are two of the sport’s finest ambassadors, and this will be fun to watch from start to finish.

THIAGO SANTOS VS JACK HERMANSSON
Knockout artists cut from different cloths, Thiago Santos prefers the spectacular, while Jack Hermansson tends to deliver the sublime in the form of a ground-and-pound attack that is a lost art these days. But to get another one of those finishes, he has to get close on “Marreta,” and that may require surviving some thunder that no one at 185 pounds wants to deal with.

JOHN LINEKER VS MARLON VERA
One of the emerging stars of the bantamweight division, Marlon Vera has won three straight, with his 217 finishes of Brad Pickett and Brian Kelleher propelling him into this marquee matchup against John Lineker. Back in action for the first time since last December, Lineker has the power to stop anyone’s winning streak, so Vera has to be busy, yet cautious, in his attacks if he wants to continue moving toward the top of the 135-pound weight class. 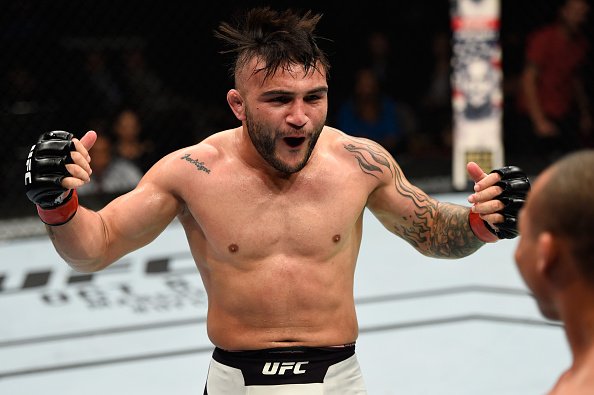 VICENTE LUQUE VS NIKO PRICE
Luan Chagas was going to be a good matchup for Niko Price, but the man replacing Chagas, Vicente Luque, may produce an even better fight. Both welterweights have the talent to make noise among the elite in the coming year, and this is the first step to getting there.

ANTONIO CARLOS JUNIOR VS JACK MARSHMAN
The middleweight division is more interesting than ever these days, especially among the prospects, and this fight is a perfect example. And while Carlos Junior has the edge here, Marshman is one of those guys who won’t go away without a fight.

ELIZEU ZALESKI DOS SANTOS VS MAX GRIFFIN
Elizeu Zaleski Dos Santos is rapidly becoming one of my favorite fighters. He’s one of those guys who is always willing to throw down, and with his power and iron chin, he’s going to be a handful for everyone he faces. This week’s foe is California knockout artist Max Griffin, and while “Pain” throws hammers, the Brazilian has proven that he can laugh at such shots and keep on moving.

HACRAN DIAS VS JARED GORDON
With just one UFC fight under his belt, Jared Gordon gets a big step up fight against longtime standout Hacran Dias, but there’s more than meets the eye here. Dias is coming off a yearlong layoff and he’s moving up from featherweight to lightweight. Gordon, 13-1 as a pro, has fought at 155 before, and without the pressure of making 145 pounds, he may be poised for a breakout performance.

DEIVESON FIGUEIREDO VS JARRED BROOKS
There are few things better than a fight between a pair of undefeated prospects, and while every bout is important for Deiveson Figueiredo and Jarred Brooks, expect to see these two fight as if this is a title bout because not only does a victory keep that “0” intact, but it moves the winner forward in a division where a few big wins could produce a visit to the title picture.

MARCELO GOLM VS CHRISTIAN COLOMBO
When a heavyweight is 25 years old with five wins by first-round knockout and no losses, it’s always a requirement to be ready to watch the first fight of the night, and that’s where Marcelo Golm will make his UFC debut against Christian Colombo, a durable big man who has never been stopped by strikes before, so we’ll see what Golm has immediately.