No matter whether you are a longtime fan, a new fan, or even a UFC fighter – we all play the same parlor game before every UFC event: Which fight will be the best of the night?

Saturday’s UFC Fight Night: Belfort vs. Henderson 3 has plenty of options to choose from.

Not only is there the final bout in the trilogy between Vitor Belfort vs. Dan Henderson, but there’s the co-main between Glover Teixeira and Patrick Cummins. And that’s just the top of the 13-fight card.

“There’s a couple of good matchups for sure,” said headliner Dan Henderson, a three-time Fight of the Night winner in the UFC. “There’s probably more than that – I’m just not familiar with everyone on the card, but I know they are pretty tough guys. I’m looking forward to Cummins/Glover as well, and there are a couple of other fights that are interesting. But overall I’ll be watching them backstage and then going out and doing my thing, too.”

Going by prefight chatter online and on site in Brazil, there’s plenty of buzz around the duel between two under-30 warriors: the undefeated Thomas Almeida and 12-2 Anthony Birchak.

“It’s cool. I had somebody tag me on Facebook last night – Karyn Bryant from FOX was talking about the fight card and for whatever reason they blew mine up and were like ‘Focus on this fight.’” That was surreal for me,” said the 29-year-old Birchak, who won many plaudits for his 97-second knockout of Joe Soto in June. “I think it’s rightfully so that we get focused on. This is two prospects coming up. It sucks that me and Thomas had to see each other this early in our careers, but the best shall prevail, and if I want to be world champion I have to fight the best in the world.

“To have people talk about this as a potential Fight of the Night – absolutely. Does Thomas go backwards? No. They call me the bull – “El Toro” – I come forward. I’m gladly going to meet Thomas right in the middle where it says UFC to trade leather with him. If he wants to stand there with me, that’s more power to him and that’s a great honor to stand there with a guy that has such beautiful striking.”

But Birchak/Almeida are not alone. Many fighters at Ultimate Media Day ahead of this weekend’s event were confident about their chances of going home with the $50k bonus for being part of the night’s best.

Case in point – Corey Anderson, a one-time Fight-of-the-Night recipient who goes up against another one-time winner in Fabio Maldonado. 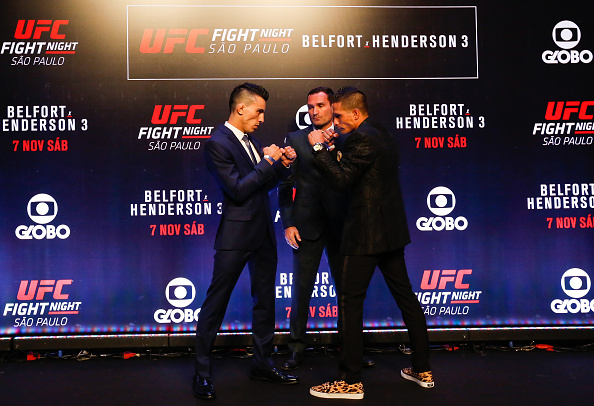 “Corey’s got cardio, Fabio got cardio. Corey’s not afraid of war, Fabio loves a war. That’s just destined to be a fight people are going to be excited for,” proclaimed Anderson, the No. 14 ranked light heavyweight. “Fabio’s at home and he’s going to bring out his A-game for sure. He’s gotta show off for the fans – I’m trying to show the world that I’m coming to take over, so I gotta do the same.

“I think I got what it takes to bring it to Fabio. He’s tough, he’s a warrior. We’re both tough – I proved that in April with my teeth being broken out and fighting through. I think this is going to be a barnburner. I think a lot of people are sleeping on the fight, but it has the potential to be Fight of the Night. Both of us take a punch and give a punch and we don’t mind taking the damage – it’s like what we are in the sport for.“

Which two fighters will end the night with admiration from a loud Sao Paulo crowd and $50k in the bank? The only way to find out is to watch from the beginning with the UFC FIGHT PASS card beginning at 6:30 pm ET and then switching over to FS1 for a full night of action beginning at 8 pm ET.