Santos relishes chance to compete in front of home crowd 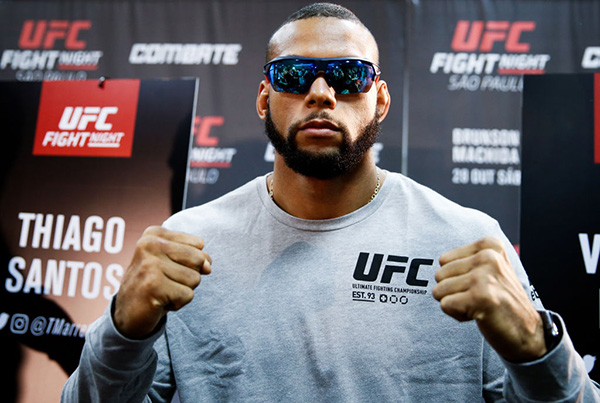 Thiago Santos pose for a photo during the Ultimate Media Day at the Matsubara Hotel for the UFC Fight Night Sao Paulo on October 26, 2017 in Sao Paulo, Brazil. (Photo by Alexandre Schneider/Zuffa LLC)" align="center" />In the midst of the middleweight division’s resurgence, Thiago Santos stood out as a dangerous dark horse contender on the rise.

A chiseled physical specimen with true one-shot power, the former paratrooper seemed to be finding his footing in the Octagon just as the 185-pound weight class was starting to rev up. Following an inauspicious debut and early UFC struggles, Santos strung together four straight victories, including highlight reel finishes of Steve Bosse and Nate Marquardt while also handing TUF: Nations winner Elias Theodorou the first loss of his professional career.

The division was on the come-up and “Marreta” was a man on the rise, but then it all went sideways.

Fresh off his victory over Marquardt, Santos accepted an opportunity to face Gegard Mousasi, the toughest opponent of his career, only to end up on the wrong end of a first-round knockout loss. Eager to get back into the win column as quickly as possible, he returned to the cage just two months later against Eric Spicely, but once again things did not go Santos’ way, as he got caught in a rear-naked choke a little less than three minutes into the opening frame.

After 18 months of success, two fights in the span of three months sent Santos tumbling down the rankings, forcing him to regroup.

“I think there are many factors together,” Santos said of his two-fight skid, speaking through a translator. “Taking a short notice fight and some family and personal issues; it was a culmination of several factors.”

While he declined to elaborate on the issues that troubled him during that time, it appears as if those dark days are behind him as Santos has hit the ground running in 2017, collecting a pair of stoppage victories as he heads into battle with Jack Hermansson this weekend in Sao Paulo.

Saturday’s showdown with “The Joker” is a bittersweet endeavor for Santos. On one hand, the 33-year-old finisher relishes the chance to compete in his home country, in front of the passionate and ultra-supportive Brazilian fans. On the other hand, he was briefly scheduled to headline last weekend’s UFC Fight Night event in Gdansk, Poland before his proposed opponent had a change of heart, scuttling Santos’ first main event opportunity. 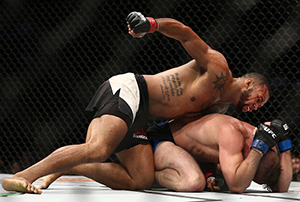 Gerald Meerschaert in their middleweight bout during the UFC 213 event at T-Mobile Arena on July 9, 2017 in Las Vegas, Nevada. (Photo by Rey Del Rio/Getty Images)" align="right" />“Obviously I was a little bummed out that I didn’t get to fight in a main event,” said Santos, who carries a 7-4 record in the UFC cage into his main card assignment opposite his fellow middleweight hopeful. “But I’m thankful that the UFC was able to get me a fight a week later. If I had to wait a few weeks or months, it would have been different, so I’m thankful that I could keep everything the same.”

Santos and Hermansson actually enter this weekend’s clash in comparable positions, as each suffered their first UFC losses at the hands of Cezar Ferreira and both head into their pairing on the heels of back-to-back stoppage victories – Santos having earned consecutive second-round wins over Jack Marshman and Gerald Meerschaert; Hermansson having collected twin first-round finishes over Alex Nicholson and Brad Scott.

Regardless of their similarities and despite holding a high opinion of the man he’ll share the cage with this weekend, Santos’ sole focus is on regaining the ground he lost in the second half of last year and continuing to pile up however many wins it takes to help him achieve his ultimate dream: winning the UFC middleweight title.

“My goal is to become the UFC champion and I’ll have to work hard for that,” he said. “I’ve never picked opponents. It really doesn’t matter who I’m fighting and what position they are in the rankings; I think that what is important is to put on good fights and keep on winning.

“He’s a tough guy,” Santos said of Hermansson, who has won 11 of his last 12 outings. “He’s very diverse and that’s not something that we see very often – someone who is equally skilled on the feet and on the ground – so I think that’s why it’s going to be a good fight.