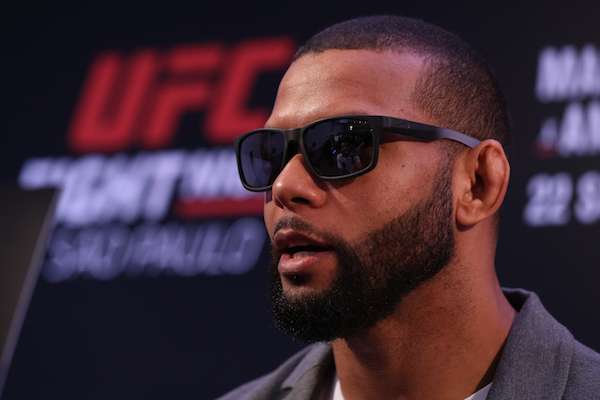 You would think that the idea of having a highly-trained mixed martial artist about to unleash bombs on you for 15 minutes or less would inject a healthy amount of fear into your system. But Thiago Santos isn’t one to get easily rattled, and if he does feel any of those emotions, he knows how to control them.

How? Well, he’s been in worse situations.

“Fear brings us confidence,” said Santos, who spent seven years as a paratrooper in the Brazilian Army. “We’ve learned that, even when we were about to jump. Every time we had to jump, although we were very experienced, we were always a bit afraid. And that used to make us feel confident."

“You worry about your safety, about the parachute, if it’s attached to you,” he continues. “You think about all these things. So fear is good. It’s part of our lives. I feel fear when I go fight. The difference is that you can’t let this fear make you terrified. You can’t panic. If you do, it’s over. But feeling fear, that kind of fear that you can control, that’s good. It gives you confidence.”

A confident “Marreta” has also done a good job of putting a healthy amount of fear into his opponents. That’s inevitable, considering that eight of his ten UFC wins have come by knockout. The Rio de Janeiro native is also a fearless competitor, something fans were reminded of when he stepped up to replace Glover Teixeira against Jimi Manuwa this weekend in Sao Paulo. But as it goes in the fight game, Manuwa suffered a late injury that brought in a new opponent, Eryk Anders, for Saturday’s bout. It doesn’t matter. Santos is headlining a UFC event for the first time, and he can’t wait to represent for his nation.

“This is my first main event and I’m really happy I got this opportunity,” Santos said. “I’ve waited a really long time for this moment, and I want to make it all count. I want to do well, to get there prepared and, God willing, to bring another victory to Brazil and enjoy this moment. It’s a very important moment in my career. I’m really happy. It’s a dream come true and I will achieve many other dreams, but that’s definitely a special moment in my career, in my life.”

With Santos fighting in the UFC since 2013, it’s easy to forget that he’s only been training for eight years, which makes his rise in the middleweight division even more impressive. But after a decision win over Kevin Holland at UFC 227 in August, Santos did express a desire to test the waters at 205 pounds. And he got his wish to fight at light heavyweight, even though he’ll be fighting another middleweight vet in Anders.

And while a definitive win in his 205-pound debut could entice him to stay with the bigger folks, Santos doesn’t rule out a return to middleweight.

“It’s not definitive,” he said of the move to 205. “I want to try it out and see how I’m going to feel fighting with a heavier guy, so it will all depend on my performance. After that, we’re going to decide whether I’m going to stay in this division or not. But, obviously, my main goal is the UFC belt, regardless of the division. Whether it’s in the middleweight or in the light heavyweight division, I want to become the champion.”

He’s got the power to end any opponent’s night, and he’s said that we may even see his ground game this weekend. Yet wherever the bout goes or who he’s competing against, if there’s a fight, Thiago Santos wants in.

“I want to do it for as long as I can,” he said. “Fighters don’t really have a long career. So I want to fight for as long as I can. As long as I’m injury free, I want to keep fighting. I think this kind of attitude shows who I am. I’m a guy who doesn’t shy away from his battles, who doesn’t hide or shy away from any challenge. If there is a challenge, I volunteer, as I always did when I served in the Army. If there is a challenge and if nobody steps up, I’m the guy who’s willing to do it, who will step up. It shows who Thiago “Marreta” is.”