Santiago Ponzinibbio Is Only Focused On The Present

Santiago Ponzinibbio Is Out To Prove He Is One Of The Best Welterweights In The World By Defeating Alex Morono At UFC 282
By Maddyn Johnstone-Thomas, on Twitter @MaddynThomas • Dec. 9, 2022

Santiago Ponzinibbio wasn’t going to pass up the opportunity to get back into action, no matter what obstacles stood in his way.

As he was heading into training last Sunday night, Ponzinibbio got a call that his opponent, Robbie Lawler, was going to be out of the fight due to an injury. When asked if he wanted to stay on the card, there was no hesitation; he immediately said yes and waited patiently to see who his new opponent would be. The 36-year-old remained positive and soon got the call that Alex Morono would be his new opponent at UFC 282: Błachowicz vs Ankalaev.

“I am a fighter, a natural fighter; of course, I have a strategy that I worked on for Lawler, the strategy is different for this guy, but I still believe in my abilities to beat this guy,” Ponzinibbio said. “I took the challenge and I think it’s going to be fun.”

Ponzinibbio is looking to get things back on track against Morono after dropping his last two fights via split decision to Geoff Neal and, most recently, Michel Pereira in May.

Even though Ponzinibbio believes he won those two fights, he has learned that he can’t dwell on things that are in the past. That’s his mindset, not only for life inside the Octagon, but also outside of it.

“You need to live in the present,” Ponzinibbio said. “We are building the future with the action we take in the present. That’s very important. I’m back in the gym, working every day. I make more money when I win…but it’s time we can’t buy. I lost time, but I have a feeling I can still take my goal. My goal is the belt, but now my next step is this Saturday.” 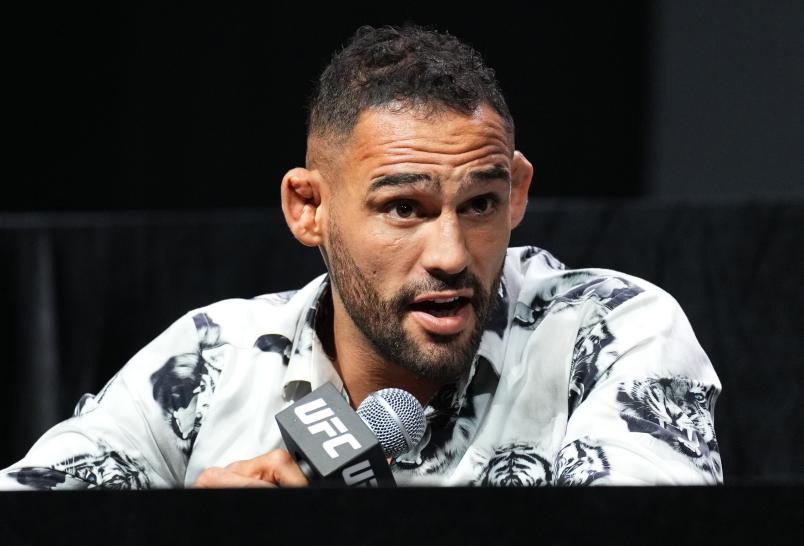 Santiago Ponzinibbio of Argentina is seen on stage during the UFC 282 press conference at MGM Grand Garden Arena on December 08, 2022 in Las Vegas, Nevada. (Photo by Chris Unger/Zuffa LLC)

The welterweight has learned to remain positive throughout difficult times in his fighting career. He spent 26 months away from the Octagon dealing with injuries, and prior to his time away, he was on a seven-fight win streak, sitting at the top of the rankings and potentially on his way to fighting for gold.

Being away for a significant amount of time made Ponzinibbio realize how much he needs to cherish the time he gets inside the Octagon, which is why he wasn’t going to turn down a new opponent this weekend.

“When I got back, it was a little difficult, but now I understand how important it is to stay in action,” Ponzinibbio said. “In a perfect world, I wished to fight in September and December, but they said December and I waited. But now that the fight was canceled, for sure I was going to fight with somebody. It’s a catchweight, it’s a different style of fight, doesn’t matter. What’s important is that I have a fight and I can show to the world who I am.”

He steps into this catchweight matchup with Morono, who is on a four-fight win streak, most recently defeating Matthew Semelsberger at UFC 277. Prior to that victory, he defeated Mickey Gall, David Zawada and Donald Cerrone, but Ponzinibbio isn’t underestimating him by any means. This isn’t fight that was originally scheduled to go down, but it is still a chance for the “Argentine Dagger” to get one step closer to where he was once was.

“This is what we got a week out and we take the challenge,” Ponzinibbio said. “He’s a good kid, good fighter, eight victories in last 10 fights, four victories in a row, I think that it’s good for me to prove to that I am one of the best fighters in the world and I am really confident to finish him and show to the world who I am.”

Since his last fight, Ponzinibbio has been focusing on an improving a lot of different areas of his game, but that doesn’t mean he is going to change his style. He emphasized that he is a striker and he is looking to go out and get the finish against Morono.

What does a successful performance look like from Ponzinibbio on Saturday night?