Santiago Ponzinibbio: He Fights for Us 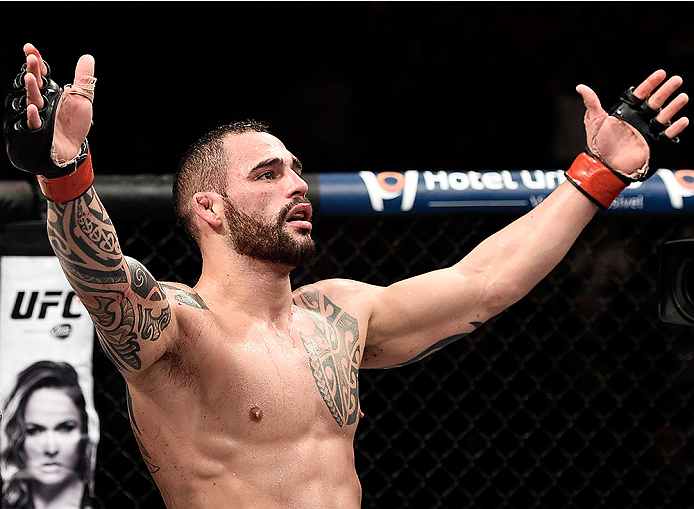 Santiago Ponzinibbio is not only a fun name to say, but he’s a doubly fun fighter to watch. Through his impassioned performances, it’s clear that the Argentinean known as “Gente Boa” is giving it his all inside the Octagon for the fans.

“I fight with my heart,” Ponzinibbio said. “I think this reflects in my fights and the fans can see it. My fights are exciting because I give all of me.”

Of course, it’s not just about giving it his all, because Ponzinibbio is enormously effective with a fast and furious fighting style that has earned him an impressive 21-2 pro record including 17 stoppages, 12 of those occurring in the first round. And who wouldn’t want to cheer on a welterweight who rushes his opponent, more than half the time scoring a knockout or securing a submission within the next few minutes?

The 28-year-old has successfully transferred his truly exciting brand of MMA from local leagues across South America to inside the Octagon, first as a cast member on The Ultimate Fighter Brazil 2. Storming his way to the tournament’s finals, Ponzinibbio earned the Knockout of the Season bonus against Marcio Santos and the Fight of the Season bonus with his unanimous decision win over Leonardo Santos. Unfortunately, Gente Boa broke his hand in that memorable battle, so Santos took Ponzinibbio’s place and went on to win the show by submitting William Macario at the finale.

Since TUF Brazil 2, Ponzinibbio has gone 2-1 inside the Octagon, with back-to-back wins in his most recent outings. After a hard fought decision loss to the then-undefeated Ryan LaFlare in his debut, Gente Boa dropped and stopped TUF Brazil 3 alum Wendell Oliveira in only 80 seconds last September. Earlier this year at UFC Fight Night Bigfoot vs. Mir, Ponzinibbio took a step-up in competition as he met the undefeated Sean “Tarzan” Strickland who was 2-0 inside the Octagon and dropping down from middleweight.

“I was very motivated,” Ponzinibbio said of his mental state going into the bout. “I knew it would be a good fight because he was undefeated for 15 fights. I was happy with my performance, but there are always things to improve. I knew his boxing was good and it was my strategy to keep a short distance and not give him the chance to attack.”

It may have not been a finish like he always aims for, but Ponzinibbio kept relentless pressure on Strickland in the stand-up, earning 30-27 scorecards from all three judges. For 15 minutes, the Argentinean was able to subdue the long and technical striking of Strickland and keep his foe off balance and a little gun shy, while landing more shots of his own. It was a controlling victory through pace and space, which showed a maturation to Ponzinibbio’s usual “swing first and ask questions later” attack.

Up next, Ponzinibbio will head to Hollywood, Florida for UFC Fight Night: Machida vs. Romero and a bout with “The Monsoon,” Lorenz Larkin. In January, Larkin made his emphatic entrance into the welterweight division by scoring a first-round knockout of John Howard and earning a Performance of the Night bonus in the process.
With an overall 15-4, 1 NC pro record, Larkin has had success at heavier classes, but he may have found his optimal fighting weight with the recent drop to 170 pounds. And in addition to this bout having two aggressive strikers in it, Larkin is a teammate of Strickland’s and will be looking to get some revenge for Millennia MMA.
“He is a great fighter, very experienced and versatile,” Ponzinibbio said. “I have no doubt it will be an amazing fight, probably the most exciting fight in the event. I will give more than 100 percent, like I always do. I will fight with my heart and give the best of me.” 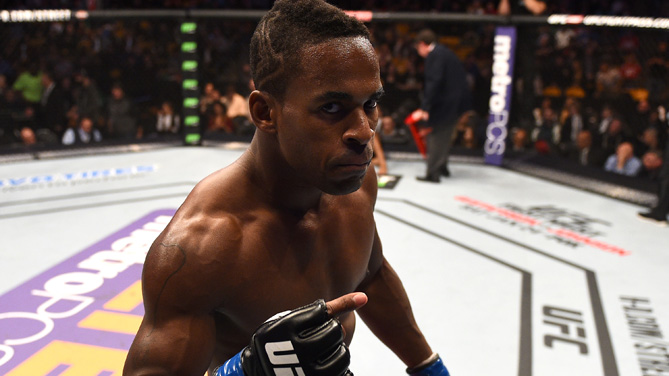 In preparation for Larkin, Ponzinibbio is busy training with the vaunted American Top Team in Coconut Creek, Florida. Helping to keep his kickboxing - which Ponzinibbio started when he was 13 - sharp is Muay Thai coach Vitelmo “Katel” Kubis. In charge of making sure Gente Boa’s BJJ black belt is up to snuff is highly-regarded 3rd degree BJJ black belt Ailton Barbosa.

Although this bout is less than an hour from where he trains at ATT, this will be Ponzinibbio’s first scrap in the United States. For those thinking about rooting on Ponzinibbio, but are unfamiliar with his nickname’s origins - just know he’s called it because he’s a genuinely good guy.

“It means ‘Nice Guy’ and it was given to me when I participated in the TUF Brazil.” Ponzinibbio said. “There is a rivalry between Argentina and Brazil because of soccer. So when I was in the TUF house they were expecting some rivalry because I'm Argentinean and that didn't happen. Brazil is my second home and I have a lot of respect for my Brazilian fans and friends.”

This Saturday in Hollywood, Florida, welterweights will war as Ponzinibbio will try with all his might to give the fans some fireworks against Larkin. “I fight with my heart and I train hard to accomplish my goals,” said Ponzinibbio. “I will always give my best.”