French-Canadian Marc-André Barriault Has Made A Number Of Sacrifices Throughout His UFC Career — The Biggest Coming In The Form Of Leaving His Home Of Ontario Behind For Florida
By E. Spencer Kyte, on Twitter @SpencerKyte • Jan. 30, 2022

The temperature in Quebec City at this time of year tends to hover in the single digits, with a quality cold snap bringing things close to or even below freezing.

The temperature in Deerfield Beach, Florida might fall into the high 50s, but a nice day will still be sunny and somewhere in the 70s.

“One hundred percent I’m not missing the weather, the wintertime,” laughed middleweight Marc-André Barriault, who traded the frozen climes of his native Quebec for much warmer weather in South Florida last year. “I really enjoy Florida right now; even if it’s a little cold; it’s not the same as at home.” 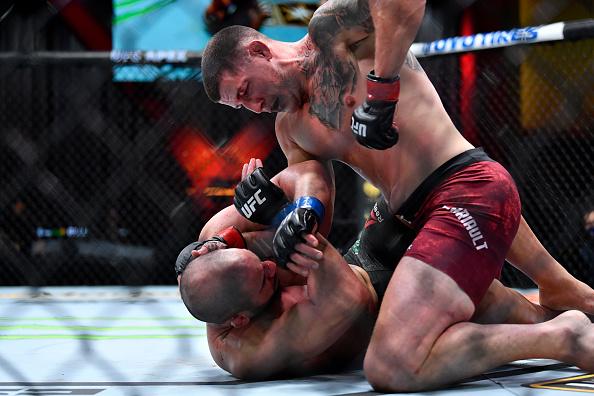 Marc-Andre Barriault of Canada punches Abu Azaitar of Morocco in their middleweight fight during the UFC 260 event at UFC APEX on March 27, 2021 in Las Vegas, Nevada. (Photo by Chris Unger/Zuffa LLC)

Barriault, who takes on Dana White’s Contender Series graduate Chidi Njokuani on Saturday, did his first camp with the team at Sanford MMA last year, ahead of his victory over Abu Azaitar in March. It was his first official victory in the UFC following a 0-3 start and a second-round finish of Oskar Piechota being overturned when he tested positive for ostarine.

A two-division champion under the TKO banner prior to signing with the UFC, Barriault knew he was capable of more than he’d shown in his first four outings, and after gutting out a victory over Azaitar, the 31-year-old French-Canadian went all-in on himself.

“I came here for my first training camp and I fell in love with the team — the teammates, the coaches, the vibe; just the lifestyle is perfect for me,” Barriault said of the all-star squad that includes coaches Henri Hooft and Greg Jones, prominent contenders Gilbert Burns, Michael Chandler, and a host of others.  “As soon as I won my first UFC fight, I promised myself to do things for good reasons and be committed to what I want, so I made the move and here I am.”

Following his win over Azaitar, Barriault loaded up a travel RV and hit the road, along with his girlfriend and their dog, making the 25-hour drive south to set up shop and fully invest in chasing his dreams. A little more than five months later, he stepped into the Octagon against Dalcha Lungiambula and secured a second consecutive victory.

“It’s a game-changer,” he said of being in South Florida, which has long been a destination of choice for athletes looking to forge their path inside the cage. “I needed to get out of my comfort zone. With all respect to my old teammates and my team, where I am right now in my career and my life, I just wanted to get all the experience I needed and surround myself with high-level athletes day-after-day, all the coaches that can push me through my journey, and be the best version of myself.

“I think all those setbacks, those speed bumps made me more angry, more hungry about what I need in life and what I want in my career,” Barriault said in regards to his rookie struggles, where he dropped consecutive decisions to Andrew Sanchez, Krzysztof Jotko, and Junyong Park in eight months. “Right now, even if I wanted to have a better start to my career, I’m grateful for what I’ve gone through and done at this point.

“It made me who I am right now, and I think I’m a better human, a better athlete because of what happened at the beginning of my career. I’m looking forward now — I know who I am and where I want to go, so I’m focused on what is in front of me.”

This weekend, it will be Njokuani that is standing in front of him

A member of last season’s graduating class on the annual talent-search competition, Njokuani doesn’t fit the profile of the majority of athletes that have made the leap from the Contender Series to the Octagon over the first five years of the show’s life.

While Saturday marks his promotional debut, Njokuani is a 33-year-old veteran with 28 fights under his belt, including victories over current UFC competitors Max Griffin and Andre Fialho, and an established, well-earned reputation as a dangerous striker. Unlike the majority of last season’s graduating class (and the bulk of the competitors to matriculate to the Octagon thus far), the newcomer carries a wealth of experience with him into his first appearance this weekend and is ready to dive right into the deep end of the middleweight division.

And it’s because of his vast experience that Barriault wasn’t particularly surprised when the UFC called and offered him this matchup with the DWCS grad.

“Since the beginning of my career, the UFC has always given me tough matchups — good wrestlers, well-rounded guys — so I wasn’t surprised at all,” he said of the pairing with Njokuani, who has earned back-to-back stoppage wins heading into Saturday event. “Even if it’s going to be his first UFC fight, he has a lot of experience in mixed martial arts. Him and his brother have been around for a while, so I take him very seriously.

“I know he’s going to be sharp, like a sniper with his tricky kicks, with all his tools, but I just want to show everybody that I’ve made good improvements in my game. I want to make this fight an MMA fight.

“I’m a grinder; I can take shots,” Barriault added. “I like to throw, I like to stay in the pocket, I like to make it dirty, and that’s still the plan — to fight him on his heels, so I want to put good pressure, be aware of everything, and show that I’m a real athlete.”

After struggling out of the gate to start his UFC career, the French-Canadian middleweight found his footing last year.

At the same time, he uprooted his life, trading the comforts of home for a travel trailer and a chance to surround himself with scores of like-minded individuals chasing the same dreams.

Now, as he readies to kick off his 2022 campaign, Barriault is ready to show that the investments he’s made in himself are paying off and give himself every opportunity to walk away with no regrets.

“I want to take each fight very seriously, like there is no tomorrow,” he said. “Even if I’m on a good winning streak, I don’t want to be comfortable with things — I just want to keep going, training hard with my team here in Florida. 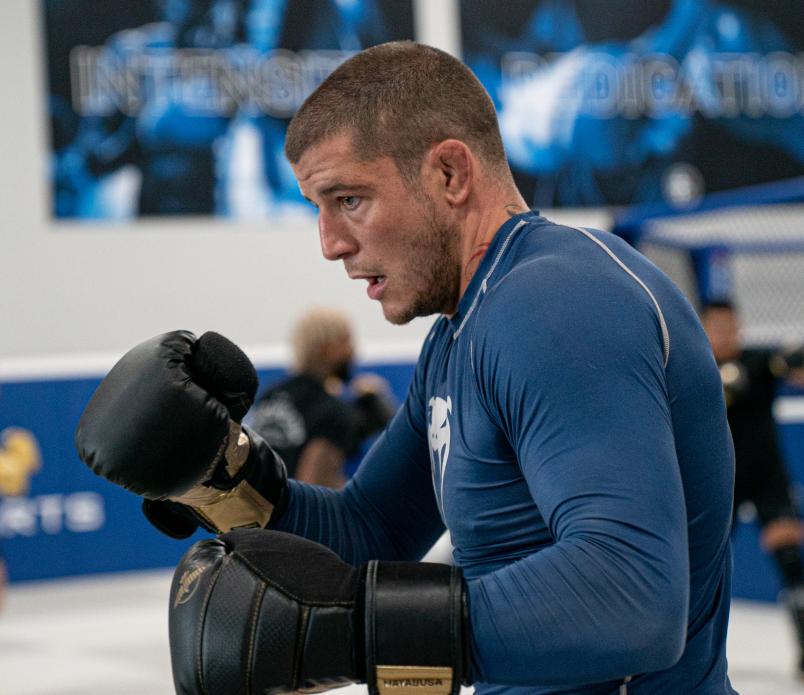 “I’m living the dream right now. I’m still living in my travel trailer with my girlfriend and my dog. I like this lifestyle, man; it makes me more and more focused, brings out more grind and more hustle.

“I want to show everybody what I have inside of me and be happy with the result.”