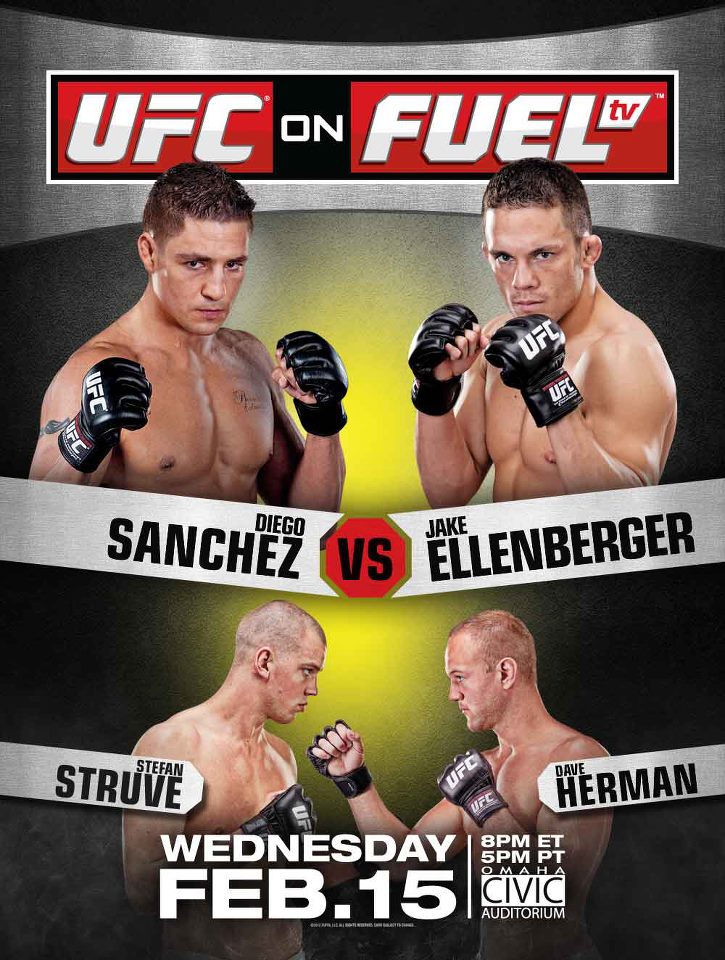 Las Vegas, Nevada – The Octagon® returns to Omaha, Neb. on Wednesday, Feb. 15, as the Ultimate Fighting Championship® presents an intense welterweight bout between top contenders Diego Sanchez and Omaha native Jake Ellenberger. Sanchez, the season one winner of The Ultimate Fighter®, and Ellenberger, a winner of five straight, will collide at the Omaha Civic Auditorium. It will be the first UFC main card featured live on FUEL TV, as a part of a three-hour broadcast beginning at 8 p.m. ET/5 p.m. PT.

“The welterweight division is stacked with contenders and Diego Sanchez and Jake Ellenberger want to prove that they deserve a shot at the title,” UFC President Dana White said. “Diego is known as one of the most exciting fighters in the sport and Jake has knocked out four out of his last five opponents. This is a great fight for the fans in Omaha and it’s going to make for an awesome main event on FUEL TV.”

Diego “The Dream” Sanchez (fighting out of Albuquerque, N.M.) first made a name for himself as an aggressive, free-swinging contestant on season one of The Ultimate Fighter® nearly seven years ago. Today, Sanchez (25-4) remains one of the most exciting competitors in the UFC and he’ll look to extend his winning streak to three in Omaha. With a chance to move firmly into the 170-pound title picture, the 30-year-old sees 2012 as his year to capture a UFC title.

“I am expecting an electric atmosphere for my fight against Jake Ellenberger in the UFC on FUEL TV card,” Sanchez said. “Not only is Omaha in the heart of some of the best wrestling in the U.S., but it is also Ellenberger's home. I have never been more ready for a fight in my career.  Fans are going to see a focused and well-rounded Diego Sanchez stepping into the Octagon. I promise they will like what they see.”

Fresh off a devastating knockout win over former title challenger Jake Shields in just 53 seconds last Sept., Jake “The Juggernaut” Ellenberger (fighting out of Omaha, Neb.) looks to extend his winning streak to six in his native Omaha when he fights Sanchez. A training partner of top middleweight Mark Munoz, the 26-year-old Ellenberger (26-5) owns wins over Shields, Sean Pierson, Carlos Eduardo Rocha, John Howard and Mike Pyle in his UFC career. His collision with Sanchez on Feb. 15 is one he believes will propel him into top contender status.

“Sanchez has fought a lot of great fighters and he brings a lot of good tools to the table, but he won’t beat me,” Ellenberger said. “I’ve always prepared for the worst and hoped for the best. I always look to finish fights as fast as I can, just being prepared as I can. But I can see a TKO in the first or second round.”

In his last trip to the Octagon, Stefan “Skyscraper” Struve (fighting out of  Beverwiijk, The Netherlands) submitted Pat Barry in dramatic fashion to earn the highly-coveted Submission of the Night bonus. Looking to make it two in a row, the 6-foot-11, 235-pound Dutchman now has his sights set on a dominant finish in Nebraska. Still, the 23-year-old Struve (26-5) knows he must be wary of the finishing ability of his heavy-handed opponent.

“I think I’m the more technical striker,” Struve said. “He’s got KO power, but he still has to prove that against higher caliber fighters. Maybe his wrestling is better, but if he wants to take me down, he’s gonna have to work from my guard.”

Standing 6-foot-4 and weighing in at 242 pounds, heavyweight Dave Herman (fighting out of Temecula, Calif.) has been fortunate enough to train alongside former PRIDE® and STRIKEFORCE® champion Dan Henderson. The insight from “Hendo” has certainly paid off, as the 27-year-old has amassed a 21-2 record, including a knockout win over John-Olav Einemo in his UFC debut in June. He’ll look to continue his ascent when he meets the battle-tested Struve at the Omaha Civic Auditorium.

“He is good striker, with a long reach and long legs,” Herman said. “But I've been training at Team Quest in Temecula, one of the best MMA teams in the world, and with Daniel Woirin, whom I believe is the best Muay Thai coach in the world. I will be in the best shape of my career for this fight. I will be ready.”

A bout between unbeaten heavyweights Stipe Miocic (fighting out of Euclid, Ohio) and Phil De Fries (fighting out of Sunderland, England) will also take place in the Cornhusker State. The 29-year-old Miocic (7-0) made his UFC debut at UFC 136, besting hard-nosed heavyweight Joey Beltran. Meanwhile, the 25-year-old De Fries (8-0, 1 NC) kicked off his UFC career at UFC 138 in November by defeating the durable Rob Broughton. In February, the two will lock horns in a darkhorse candidate for Fight of the Night.