REPLAY: UFC FIGHT PASS has the first three fights of the night

The rumors of Diego Sanchez’ demise were apparently exaggerated, as the veteran winner of season one of The Ultimate Fighter broke a 1-3 streak in his last four fights on Saturday, defeating fellow lightweight standout Jim Miller by a razor-thin unanimous decision in the UFC FIGHT PASS featured bout at the MGM Grand Garden Arena.

Albuquerque’s Sanchez ran out of his corner at the start but his takedown attempt was turned away by Miller, who looked to settle into a more measured pace, and he did, with his striking game looking sharp as he picked at Sanchez’ defense. Midway through the round, Sanchez found his takedown and began firing away with ground strikes, scoring enough to make it a difficult round to score.

Miller again found success with his striking in round two, with his biggest shot, a kick to the body, ultimately costing him, as Sanchez absorbed the kick, grabbed the leg and got a takedown. This time, Miller was able to rise without any significant scoring being done, and he went right back to work, landing hard punches kicks and knees on the head and body of “The Nightmare,” whose attempts to get back in front were growing desperate.

The pace slowed in the final frame, with Sanchez still trying to make something happen, but miller unable to make him pay like he did earlier. The two did trade brief takedowns and exchanged strikes in the closing moments, giving the judges another tough task once the final horn sounded.

Sidelined since October of 2014 due to injury, Canada’s Jason Saggo made a triumphant return to the Octagon in lightweight action, ground-and-pounding his way to a first-round TKO win over Justin Salas.

Opening with some hard kicks, Prince Edward Island’s Saggo was taken down by Salas 90 seconds in, but he smoothly reversed position in a scramble, and he took over from there, taking the Wyoming native’s back and proceeding to flatten him out for the ground strikes that forced referee Yves Lavigne to intervene. 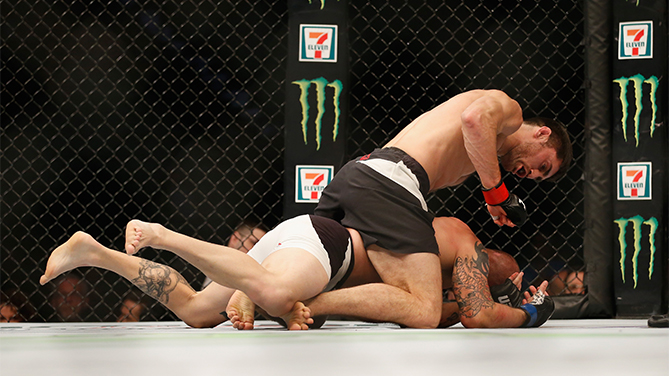 In the featherweight opener, Road to the UFC Japan finalist Teruto Ishihara earned his first UFC victory, knocking out TUF 22 alum Julian Erosa in the second round.

Erosa had difficulty dealing with the wild charges of the offensive-minded Ishihara in the opening frame, yet was still able to score a pair of flash knockdowns with front kicks to the body. The round belonged to Ishihara though, thanks to several hard punches and kicks that landed, and in round two, the Osaka native ended matters, landing a flush left hook that put the American on the deck. Follow-up strikes brought in referee Chris Tognoni to officially stop the bout at the 34-second mark. 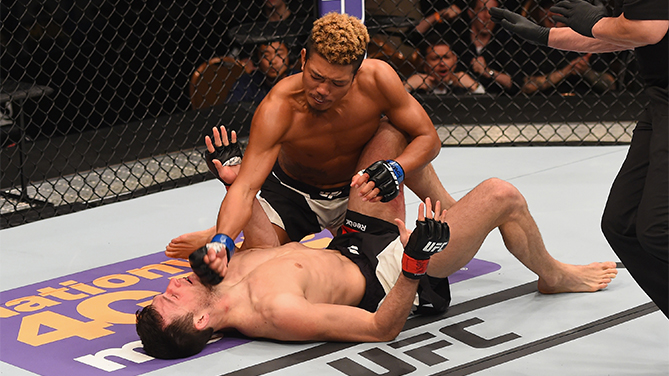