Sanchez ready to prove he's at his best

Before his debut in Mexico City this Saturday against Marcin Held, Diego Sanchez is excited to return to the Octagon, but as far as this being his “real” debut in Mexico, he’s not buying it.

“No, Ricardo Lamas in Monterrey, Mexico was the real fight,” laughs Sanchez, who also saw two UFC 180 fights in Mexico City scrapped in 2014 before the loss to Lamas in November of 2015. “This is just another fight, another opponent, another city. But it comes with its own complications and special things about it.”

The biggest complication may not even be Poland’s Held, who is a highly-touted newcomer eager to make a splash in the UFC at Sanchez’ expense. Instead, the talk about fighting in Mexico City always seems to come back to the over 7,300 feet above sea level where the city sits. That high altitude is no joke, and while Held made the trip to the fight site for his final preparations on October 17, Sanchez remained home. At least his home is in Albuquerque, which sits at 5,900 feet above sea level.
RELATED: Sanchez's matchup with Marcin Held | Fighter bio

“It’s in my genetics to be able to breathe in higher altitude, so I’m excited for it,” Sanchez said, noting that while going to Mexico City early to acclimate could help Held, that’s no guarantee either.

“A lot of these fighters look at the Cain Velasquez fight (with Fabricio Werdum at UFC 188) and they’re like, ‘Oh, Cain Velasquez gassed out.’ You know what? Cain Velasquez got emotional and he wanted to destroy Fabricio in the first round, and he fought with emotion because Fabricio got in his head. And I think that played a lot into Cain gassing out. The other thing that people don’t realize is that the smog is so bad and I looked into that too. So it’s nice, but you’re out of your element. You don’t have your food, you don’t have your water, it costs a ton of money and that’s a decision he (Held) had to make.

“I chose to stay home and train in Albuquerque with my team and all my doctors and people that help me through injuries,” Sanchez continues. “What happens if you wake up in Mexico City with a stiff neck? Then you’re forced to have someone you don’t know working on your body. There are just a lot of complications that come with it. So I know I made the right decision.”

At this point in a career that began in 2002, the 34-year-old Sanchez knows all the ins and outs of the fight game, so his 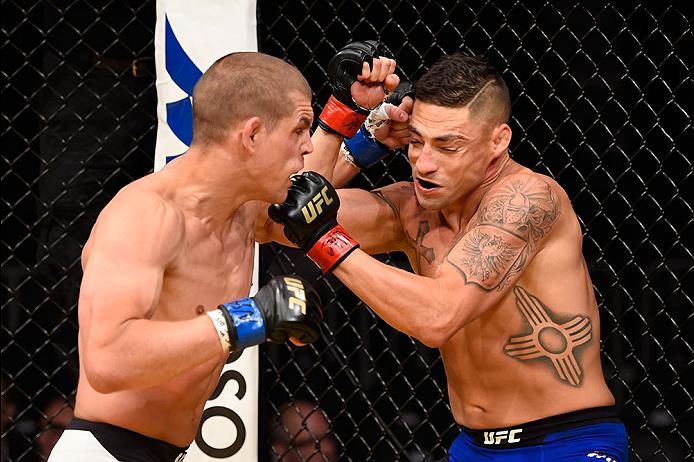 decisions are usually spot on. That doesn’t mean there aren’t a few wrenches that can be thrown in the works now and again, and that was certainly the case when he was stopped by Joe Lauzon at UFC 200 in July. It was a shocking setback, not necessarily because Sanchez lost, but that he was stopped via strikes for the first time. Yet the “Nightmare” has no excuses.

“When you lose, you learn, and you have to because that’s the only way to keep going in this sport,” he said. “And it was very, very hard for me. It was devastating for me to lose that way to Joe Lauzon when I was at my best. I know that as I was going into the cage at UFC 200, that was the best Diego Sanchez of my career. Striking, grappling, everything. And I made a huge mistake in the game plan and I got caught. That’s how this sport is. If you fight long enough in this sport, you’re going to go through a lot of different scenarios, and I finally got caught with a punch that I didn’t see. Joe did great, and Joe put it on me. And I think the ref did a great job of stopping the fight because I was hurt. But I looked back on it, and I had to let it go and say, you know what, this is just a part of the sport. It’s something that happens.”

But it’s also something Sanchez expects to never happen again.

“I’m peaking, I’m primed, and I’m in a place and a state of mind where I’m confident and I’m excited to go back out there and fight,” he said. “I don’t care if he (Held) is a leg lock, grappler guy. I’m ready to get hit in the face when I go in there, and you’re going to see a Diego Sanchez who wants to establish my brand of being one of the most entertaining, exciting fighters in the world who’s still got it.”