Sanchez, Lauzon light up media day ahead of clash

When it comes to a willingness to shed blood, sweat and tears in search of victory in the Octagon, few step up to accept that byproduct of the fight game more than Diego Sanchez and Joe Lauzon.

It’s what made the two lightweights fan favorites and combatants favorites to steal the show from the UFC 200 main card headliners. But before Saturday’s matchup, Sanchez and Lauzon weren’t shooting mean mugs at each other as they sat on opposite sides of the UFC 200 media day lineup at MGM Grand on Wednesday. In fact, despite the fact that they will be throwing hands at each other for 15 minutes or less in a few days, if anything, it’s a mutual admiration society between the two action heroes, and not a bitter, bad blood matchup.

“I’m a huge fan of Diego,” Lauzon said. “He was actually one of my favorite guys from the first season of The Ultimate Fighter. He fought (fellow New Englander) Kenny (Florian) in the finals, so of course, going into that, I was pulling for Kenny hardcore, he's our guy. But for someone I didn't have any attachment to, Diego's one of those guys I really like watching.”

For a fan of the sport, as well as a fighter, the reason is simple: When Sanchez is in the Octagon, a brawl to remember usually ensues.

“All along, he's a maniac,” Lauzon smiles. “He’s covered in blood, coming forward, throwing uppercuts, doesn't care, not afraid to change up his style a little bit. It doesn't matter - he's always intense, always aggressive, he's always in shape and he's got great jiu-jitsu. The guy's just awesome. So I've always been a fan and I'm glad I get to share the Octagon with him.”

Albuquerque’s Sanchez feels the same way about his foe, who he has been watching throughout the years, even while making the move from 185 pounds down to 145 before returning to 155 in March.

“Joe has a lot of great fights,” Sanchez said. “Joe has a lot of strong attributes, and that's against the other opponents that he's fought. I'm not saying he has strengths against me because I believe I hold all the strengths in this matchup. Obviously, submissions are his best game, but he has the killer instinct to latch on to something quick and fast. He sees something and he goes for it and he's fast with it.

“I like to say my favorite performance of Joe Lauzon was the Melvin Guillard fight. He hurt him, he took him down, and he finished him quick. I also liked his (Takanori) Gomi performance.”

Both have wins over the Japanese superstar, and other common opponents are Florian (Sanchez won, Lauzon lost) and Jim Miller (ditto). And it was in Sanchez’ victory over Miller at UFC 196 that the 34-year-old showed that he still had some gas in the tank after a rough 1-3 stretch in his previous four. The secret? A more disciplined attack for three rounds.

“I've satisfied the fans my entire career, and I'll continue to satisfy the fans, but in a more proficient and efficient way,” said Sanchez, aka the “Nightmare.”

“I am going to go in there, pick my strikes, land my strikes and when I feel like taking him down, I'll take him down. It's going to be Diego Sanchez the whole fight. I'm gonna be one step ahead of him, I'm gonna control the cage and I'm gonna be the one coming forward. I'm the stronger fighter, I'm the faster fighter, and I'm the more durable fighter.”

That confidence is fine with the 32-year-old Lauzon, someone content to let his performance on fight night do the talking. When the Octagon gate closes, he’s speaks loudly, as a young man who is second only to Nate Diaz in winning post-fight bonuses in the UFC. And while he has nothing but respect for Sanchez, Lauzon won’t have a problem pulling out all the stops to beat him either.

“It's not tough to fight guys like that for me,” Lauzon said. “People saw that video of me and my brother fighting in the backyard and my best friends are from the gym and we beat the crap out of each other. When we were supposed to fight the first time, Chris Palmquist broke my ribs helping me get ready for the fight. It's the way it goes. We'll beat each other up, and there will be no hesitation on my end at all. We'll be hanging out before at weigh-ins, we'll be joking and laughing and then we'll try to murder each other for 15 minutes, and we'll be friends after.”

Sounds like a plan Sanchez is down for as well, and he promises that this will be one matchup that will most definitely live up to the hype.

“Joe Lauzon is a tough fighter, this is a great fight, and everybody has high expectations for this matchup because they know neither of us is going to back down and that always makes for a great fight,” he said. “It's not going to be one of those fights where you see a guy playing the whole feel each other out and circle around and dance thing. We're gonna go out there and say 'You think you're holding the center of this cage? Uh-uh, buddy, I'm holding the center of this cage.' So yeah, it's going to be exciting right off the bat.”

With Lauzon and Sanchez, fight fans expect nothing less.

FIGHT PASS has you covered all week 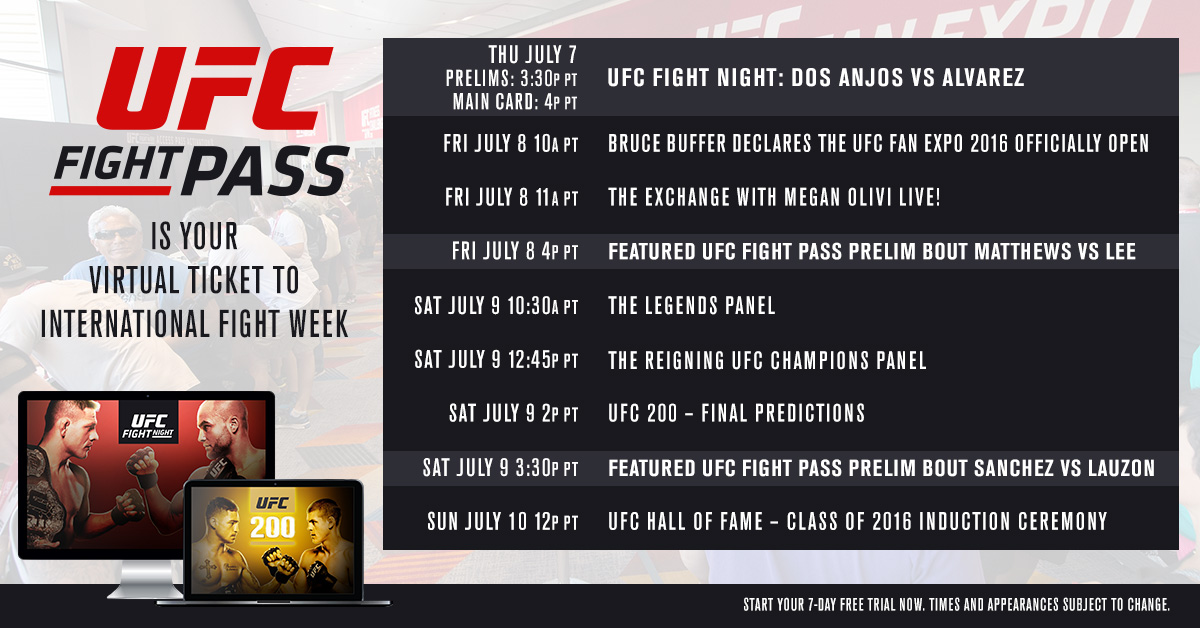