Sanchez: "I Know I Belong In The Hall of Fame"

Earning a spot in the UFC Hall of Fame’s Fight wing for his 2009 win over Clay Guida is nice, but Diego Sanchez still has to put in the hours in the gym before his UFC 239 bout with Michael Chiesa in July.

So no victory laps yet.

“Life is a blessing, so I’m living it,” said Sanchez between workouts in Albuquerque. “Fighting ain’t easy, though.”

It’s not, but there are those select few that have a knack for it, and Sanchez is one of those folks, even at the age of 37. Twenty-nine fights into his UFC career, the last man standing from season one of The Ultimate Fighter (which he won) has gotten a second wind, as he’s beaten Craig White and Mickey Gall in back-to-back fights leading up to the Chiesa bout.

And though the topic of today’s conversation is his 2009 bout with Guida, everything always comes back to the present for Sanchez, and he wants to make a point that he’s not the same man he was when he clashed with “The Carpenter” a decade ago.

But it’s fights like the ones with Guida that made Sanchez who he is.

A little over four years removed from beating Kenny Florian to win The Ultimate Fighter at middleweight, Sanchez began his post-TUF career at 170 pounds and proceeded to win seven of nine bouts, with the only losses coming against Josh Koscheck and Jon Fitch. In 2009, Sanchez moved to lightweight and defeated Joe Stevenson in a Fight of the Night battle, and then it was time to face Guida.

There was no fight wing in the UFC Hall of Fame at that point, but if there was, fans would likely have predicted that Sanchez-Guida had the potential to get the call for induction. And while you might assume that ultimately getting that call would prompt Sanchez to go back and watch those 15 minutes again, he says he doesn’t need to.

“I don’t need to go back and watch it. I have every second of that fight ingrained in my memory. I remember it like it was yesterday. And that was hell. I remember in between the first and second rounds, being like, ‘Damn, man, this was a hard weight cut and I’m feeling this.’ (Laughs) And that weight cut was what I was feeling in between rounds. People don’t know, but that last pound when it came to making weight for Guida-Sanchez, I prayed that last pound off. Even at 27 years old, 155 was an incredibly hard weight cut for me.”

Looking back, it was shocking that the fight even made it to the second round after Sanchez crushed Guida with a flush head kick. 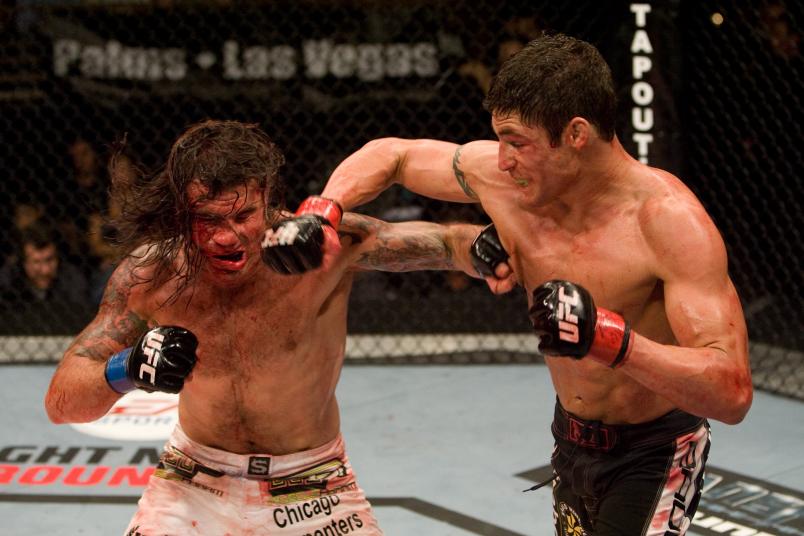 “Oh my goodness,” laughed Guida. “We trained to step away from the head kick and I walked right into it. I saw a flash and my wrestling kicked in and I shot for a takedown. And that was early in the fight. I was on autopilot. It was pure instinct and pure adrenalin in that fight.”

Sanchez wasn’t surprised that Guida got up and got back into the fight, though.

“I wasn’t,” he said. “I know Clay and I knew that this man had a vision and a lot of heart, and it didn’t surprise me. Clay’s one of the toughest human beings I’ve ever crossed paths with in my life and that’s why that fight was so classically epic.”

And there are more fights to come, and maybe even more Hall of Fame speeches to give by the “Nightmare.”