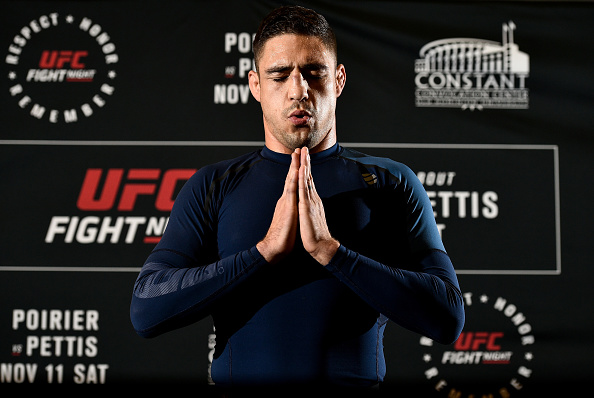 Diego Sanchez holds an open workout session for fans and media on November 9, 2017 in Norfolk, Virginia. (Photo by Brandon Magnus/Zuffa LLC/Zuffa LLC via Getty Images)" align="center" />
Saturday night in Norfolk, Virginia, Matt Brown will make what many believe will be his final walk to the Octagon. After a dozen years of fighting professionally and 23 bouts under the UFC banner, the 36-year-old welterweight is ready hang up his four-ounce gloves and call it a career, but not before one last battle.

Diego Sanchez is set to be the last man to share the cage with Brown, who arrived in the UFC following a stint on Season 7 of The Ultimate Fighter in June 2008. Just about a year his junior, Sanchez followed a similar path to the biggest stage in the sport as the man he’ll face this weekend on the campus of Old Dominion University; he just got there a little sooner.

Three years prior to Brown putting in time on Team Forrest, Sanchez was the young newcomer amongst the original band of outcasts, upstarts and hopefuls thrown together on the inaugural season of the long-running reality TV competition. He would go on to win the middleweight competition over Kenny Florian, becoming the first of 35 fighters to be declared “The Ultimate Fighter” over the course of 25 domestic seasons.

The enigmatic Sanchez has logged 25 UFC appearances since that historic evening at Cox Pavilion in Las Vegas, making him the longest tenured fighter on the roster, a distinction that is somewhat of a double-edged sword.

While his ability to continue competing at the highest level in the sport for over a dozen years is to be applauded, Sanchez has struggled to a 4-6 record over his last 10 fights, bouncing from welterweight to lightweight and back again with a one-off appearance at featherweight tossed in there for good measure.

Coming off a first-round knockout loss to Al Iaquinta earlier this year and a little under two months away from turning 36 himself, many have wondered if it might be time for Sanchez to bid the sport adieu as well, including Brown, who suggested he was going to send the long-standing UFC veteran into retirement with him this weekend.

“I have respect for him, but I feel that he kind of crossed the line a little bit in saying that he wants me to retire with him and he thinks that he’s going to retire me too in his retirement fight,” Sanchez said of Brown and his comments. “I think as a fighter, you know that you don’t cross that line.

“Don’t disrespect a man and tell him that you’re going to retire him because that’s only going to fuel the man to go in there and prove you wrong and show you more,” he added.

Yet for all his frustration about Brown’s pre-fight thoughts on his future, Sanchez has no interest in avoiding discussions about retirement.

It’s not that he hasn’t thought about the end of his career or having to make that decisions – he simply believes that each man or woman who dedicates their life to this craft has earned the right to make that decision on their own, when they see fit, and, as of right now, Sanchez isn’t anywhere close to being ready to walk away.

“Matt Brown, he wants me to retire, but the only thing I’m retiring from is (fighting at) 155 pounds,” joked Sanchez, who returns to compete in the welterweight division for the first time in over five years this weekend. “I’m retiring from 155 pounds.

“It’s not something that you plan. You don’t plan retirement – it happens and it’s a feeling that comes from God that says, ‘You know what? It’s time to hang it up.’ Every fighter knows when it’s time and when it’s time, you know, and for me, it’s not time.

“I know that the clock is ticking on me and the time that I have in this sport,” he said. “I know that that window is closing. I don’t know how long it’s going to be open, but I know that it is still open, so I’m gonna give it hell while I’m in here.”

That’s why the 35-year-old has remained committed to a maniacal training and wellness regiment that includes yoga, acupuncture and six shots of wheatgrass a day and it’s why he is so excited to share the cage with Brown on Saturday.

“I’ve always had respect for Matt Brown, the type of stylistic fighter that he is. He’s a warrior – he works hard, he trains hard, he brings an ‘A’ game on his conditioning. He’s legit, man. He’s got heart and that’s going to make for a good fight with me.

And he’s nowhere close to being ready to walk away.