Sanchez Eager to Get Unleashed on Gomi

"Lock that door, say my name, and let me go get Gomi." - Diego Sanchez 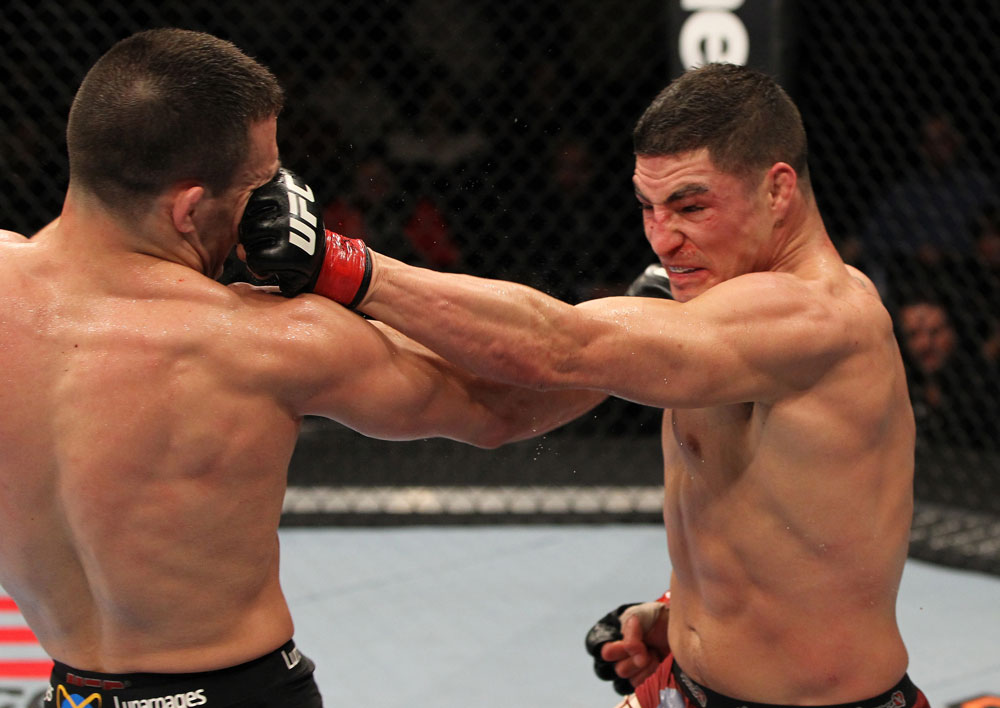 Some may express themselves more vocally about how much they love fighting, but few mixed martial artists actually show it the way Diego Sanchez does. So as he sat on the sidelines for over a year nursing a series of injuries, you get the impression that the former Ultimate Fighter winner was going a little stir crazy.

“Having the downtime was really hard,” said Sanchez, who has been out of action since his Fight of the Night decision loss to Jake Ellenberger in February of 2012. “Being out of the gym and being away from what I know and what I love to do was hard, but ever since I’ve been back in the gym, it’s been awesome.”

This Saturday, Sanchez’ return will be in Japan against local icon Takanori Gomi. It’s an intriguing fight on many levels, with the most prominent having to do with a decision “The Dream” made while out of action in Albuquerque, New Mexico, to return to the lightweight division he competed in for three bouts in 2009.

“I had a string of bad luck,” said Sanchez of his second UFC stint at welterweight, which saw him go 2-2 with three Fight of the Night awards. “I broke my hand right before the (aborted) Matt Hughes fight and still stayed positive through that, and then I hurt my ankle right before the Ellenberger fight and my shoulder was really torn out, so I had to go and get my labrum repaired right after the Ellenberger fight, so it was a matter of injuries. And one thing I remembered from when I was fighting at 155 was that there was so much less chance of injury. I don’t know if it was that I was lighter and training with lighter guys or if it was easier on the joints, but I just felt better at ‘55, so I made the decision. Coming into my prime at 31, I thought it was a better decision for my career to jump down to 155 at this point. And on top of that, there were really big guys coming down to 170 like Nate Marquardt, and those guys are monsters who are really big and they don’t gas out. They do the weight cut properly, so that’s what I’m trying to do – be the big guy at 155 and I’m gonna go in there and wreak some havoc in the division. I feel that it’s the most stacked division in MMA, especially with the Strikeforce guys coming over, so it’s very exciting.”

And despite Sanchez’ success and ability to put on show-stopping fights at 170, he does make some good points when it comes to dealing with the size and strength of welterweights that seem to be getting bigger by the day. Eventually, a small welter will find himself unable to physically compete with larger foes on a consistent basis. So even though he saw plenty of good matchups for him at 170, 155 is just as attractive while also allowing him to fight on a more level playing field.

“Either division has tons of great fights, but I think I stack up better at 155, being taller, lighter, faster, and more explosive, and being bigger on top of that,” said Sanchez, whose first lightweight stint saw him defeat Joe Stevenson and Clay Guida before he lost a UFC 107 title bout against BJ Penn.

It’s a good move for Sanchez, and a sign that despite nearly 11 years in the pro game, he’s still tweaking his game, still staying sharp, and still staying relevant in an ever-changing sport. That evolution is something that he’s constantly keeping an eye on.

I think MMA’s going through a transition and another evolution process where it’s coming down to height and reach and distance,” he said. “Guys are learning how to use their kicks and use their jab, and that distance is not like the old days when you fought a real tall guy. Back then you could just take them down. But now guys are learning how to wrestle and they know how to use their leverage, so I thought it was the best decision (to move down in weight), and I think with my previous history at 155, going down and getting two or three wins that I’ll be right there and knocking at the door for a title shot.”

That’s probably an accurate assessment if he beats Gomi and adds a couple more wins over high-profile foes, and it’s something his peers from season one of TUF really can’t claim at this point. Kenny Florian and Stephan Bonnar are retired, Josh Koscheck, Chris Leben, and Mike Swick are all coming off losses, and Forrest Griffin is recovering from a knee injury. So what’s the secret for Sanchez?

“I think, for the most part, it was my age, just being so young when I was on The Ultimate Fighter,” he said. “I was only 22 years old when they filmed it. And I just continue to keep that open mind like Greg Jackson and keep learning and keep getting better in other areas. I want to be a better kickboxer, I want to be a better boxer, and those are the areas of my game that I’m really working on a lot right now. But of course, I’m still always trying to keep my grappling, wrestling, and ground and pound sharp because that’s what I do best. Nowadays you have to be a really well-rounded mixed martial artist because the fight does start on the feet.”

That’s home for Gomi. But as far as Sanchez is concerned, “The Fireball Kid” is the perfect foil for his comeback fight, and he can’t wait for the bell to ring on Saturday night.

“Me coming off these injuries, I was focused on getting the right fight for right now, and I really felt that him coming off those two wins over two really tough guys, he’s on an upswing in his career,” said Sanchez of Gomi, who has recently defeated Eiji Mitsuoka and Mac Danzig. “But at the same time he’s 34 years old, I feel he’s had his prime, and I think he’s one of those guys that’s not gonna run away from me. He’s gonna fight me good and I think he makes for a very exciting fight, and that’s what I’m hoping for. My goal for this fight is to showcase all my MMA. I want to showcase my striking, my wrestling, and my grappling, and play the game that I love.”

And he gets to do it in Japan for the first time in his career. Sanchez says competing in the Land of the Rising Sun is a “very big thing,” but with his family and friends watching on TV and not on site, he’s treating the bout not as a sightseeing trip with a fight thrown in, but strictly business.

“It’s like I’m going to battle,” he said. “It’s the first fight my parents aren’t going to other than the ones that were on The Ultimate Fighter, so to me, this is like a warrior going on a mission to another country to go to battle, and I’m excited for it. I’ve done it all and gone through it all, and nothing really matters after they lock that door on you and you’re in that cage. It doesn’t matter where you are, it all goes away, and it comes down to your training and you, your heart, your mind, your soul, and what you have, and who wants it more. That’s what I’m excited for. Lock that door, say my name, and let me go get Gomi.”