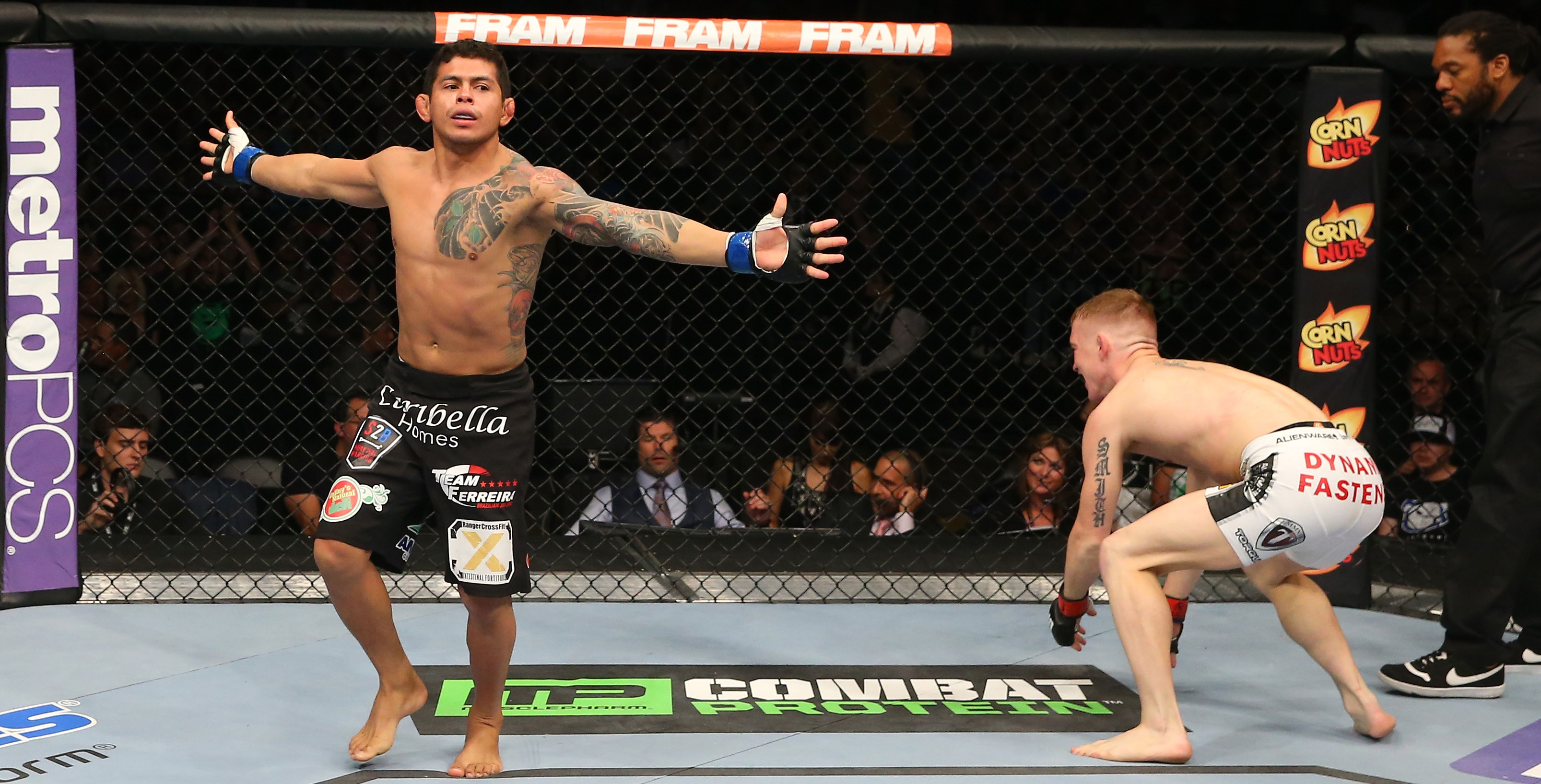 SAN ANTONIO, June 28 – Brazil’s Carlos Diego Ferreira got the fans in his adopted home state of Texas on their feet in his lightweight bout with TUF 16 winner Colton Smith, slamming, then submitting the Fort Hood product in the first round of their UFC Fight Night prelim bout at AT&T Center.

Showing no sign of the first-time UFC jitters, Pharr’s Ferreira engaged immediately and slammed Smith to the deck. From there, he sunk in a rear naked choke that produced a tap out at 38 seconds of the opening frame.

It was a wild one between bantamweights Cody
Gibson and Johnny Bedford, with Texas’ Bedford the victim of a
controversial call that gave Gibson his first UFC victory.

The
fight started out well enough for Colleyville’s Bedford, who hurt Gibson
with a series of body shots. But out of nowhere, Gibson surged back and
rocked Bedford, dropping him to the mat with a right hand. As Bedford
hit the deck, he banged his head hard and Gibson moved in for the
finish, landing one shot before hesitating as referee Kerry Hatley
stepped in to stop the bout at the 38 second mark. An incensed Bedford
jumped up immediately to protest the stoppage, but the call stood.

“Johnny
came out strong and hit me with a great shot to the body," said Gibson.
"It hurt me badly 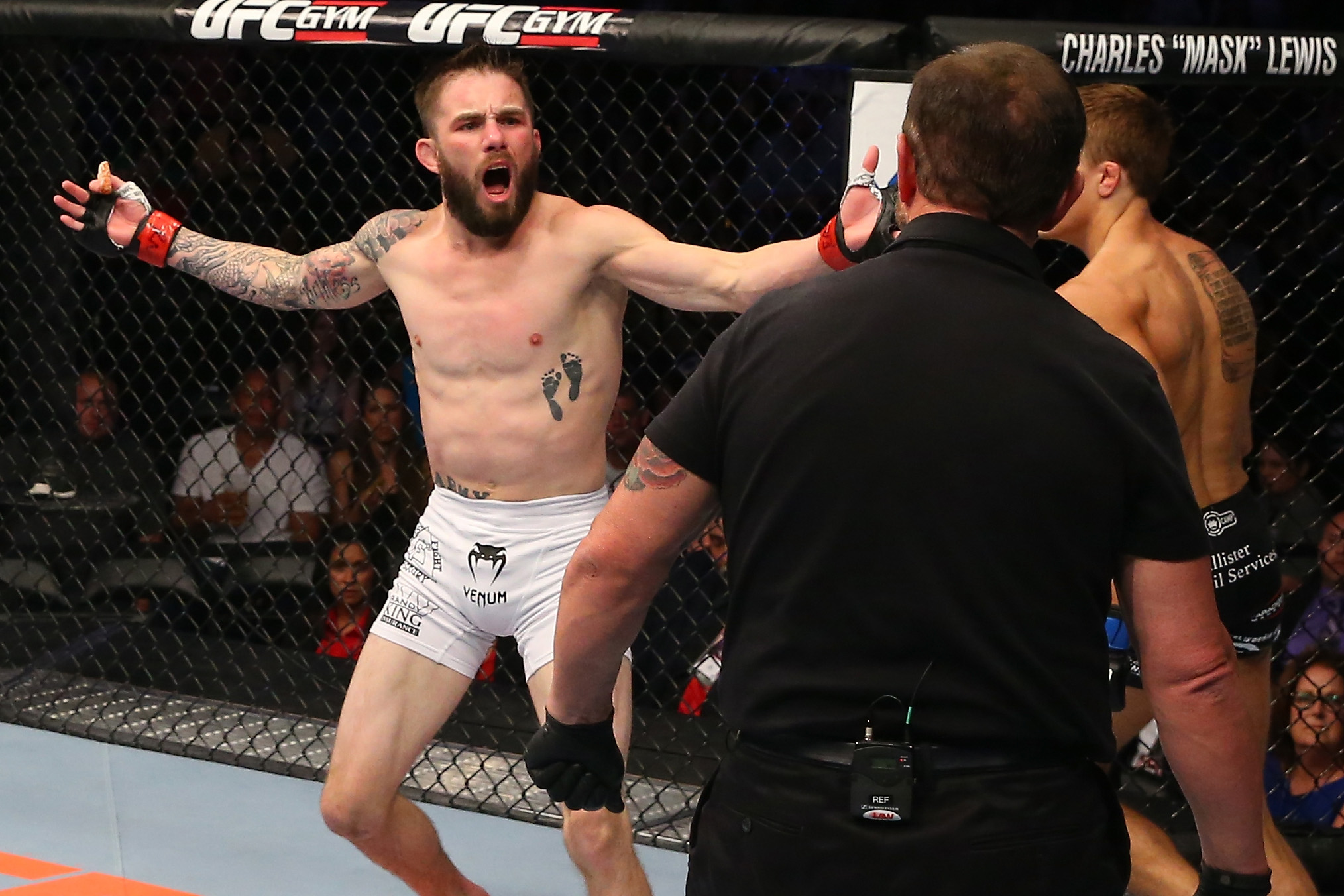 but it didn’t drop me. He followed up with a knee
that I was able to block and I countered with a big right hand that
found his chin. When I looked up I saw him go limp and drop. His eyes
rolled back and he was definitely out. He may have started to recover
once he hit the canvas but I saw the ref start to wave it off so I
hesitated. Then the ref waved it off for good. After his complaints I’m
kind of irritated with myself for hesitating. I should’ve just followed
up with more shots and really put him out completely. I don’t think the
UFC is questioning that win but if they are then no problem let’s do it
again. I’ll sign on the dotted line immediately.”

With the win,
Gibson improves to 12-4; Bedford, whose last fight was a controversial
no contest with Rani Yahya that ended due to an accidental clash of
heads, falls to 19-12-1 with 1 NC.

“We were out there striking
and I got caught with my hands down," said Bedford. "Last time I checked
we are allowed to grapple. I was in the guard with my hands up fighting
out of the position and the next thing I know the referee is stopping
the fight. I was completely aware and intelligently defending myself.
This is ridiculous, man. Half of these officials have no idea what
they’re doing and we’re the ones paying the price. I got robbed two
months ago in my fight with Rani Yahya in Abu Dhabi and now I come to my
home state and it happens again… unbelievable. I have two kids to feed
and this is how we feed our families. Something has to change fast.”

In a competitive meeting of middleweight up and comers, Marcelo Guimaraes took a close split decision win over Andy Enz.

Other
than being on the wrong end of a slam by Guimaraes, Enz had a good
round keeping the fight standing in the first five minutes, getting off
straight shots while the Brazilian fired off haymakers that mostly swung
wide.

Guimaraes’ right hand began to hit home in round two
though, and after landing a few, he scored a takedown, with Enz jumping
up immediately to resume the striking battle. Now it was Guimaraes
surging ahead, even if Enz got the last word with a hard punch to the
face before the bell.

With the fight perhaps hanging in the
balance, Enz got off to a strong start in the final frame, but in the
final two minutes, it was Guimaraes surging with a series of thudding
leg kicks and a final minute takedown that sealed the victory for him.

Many believed flyweight prospect Ray Borg should
have gotten the victory in his controversial bout with Dustin Ortiz in
April. But this time he left the judges out of it, submitting newcomer
Shane Howell in the first round.

Borg (7-1) got down to business
right away, getting the fight to the mat and sinking in what looked to
be a fight-ending rear naked choke. Howell (13-8) got loose though, much
to the delight of the crowd, but Albuquerque’s Borg didn’t give up the
back position, and moments later he sunk in the choke a second time.
This time, there would be no escape for Howell, who was finished at 2:17
of the opening frame.

Russia’s
Oleksiy Oliynyk lived up to his nickname of “Boa Constrictor,” forcing
Anthony Hamilton to tap out in the first round of their heavyweight
opener.

Neither fighter shied away from throwing heavy leather as
the bout opened, but after rocking 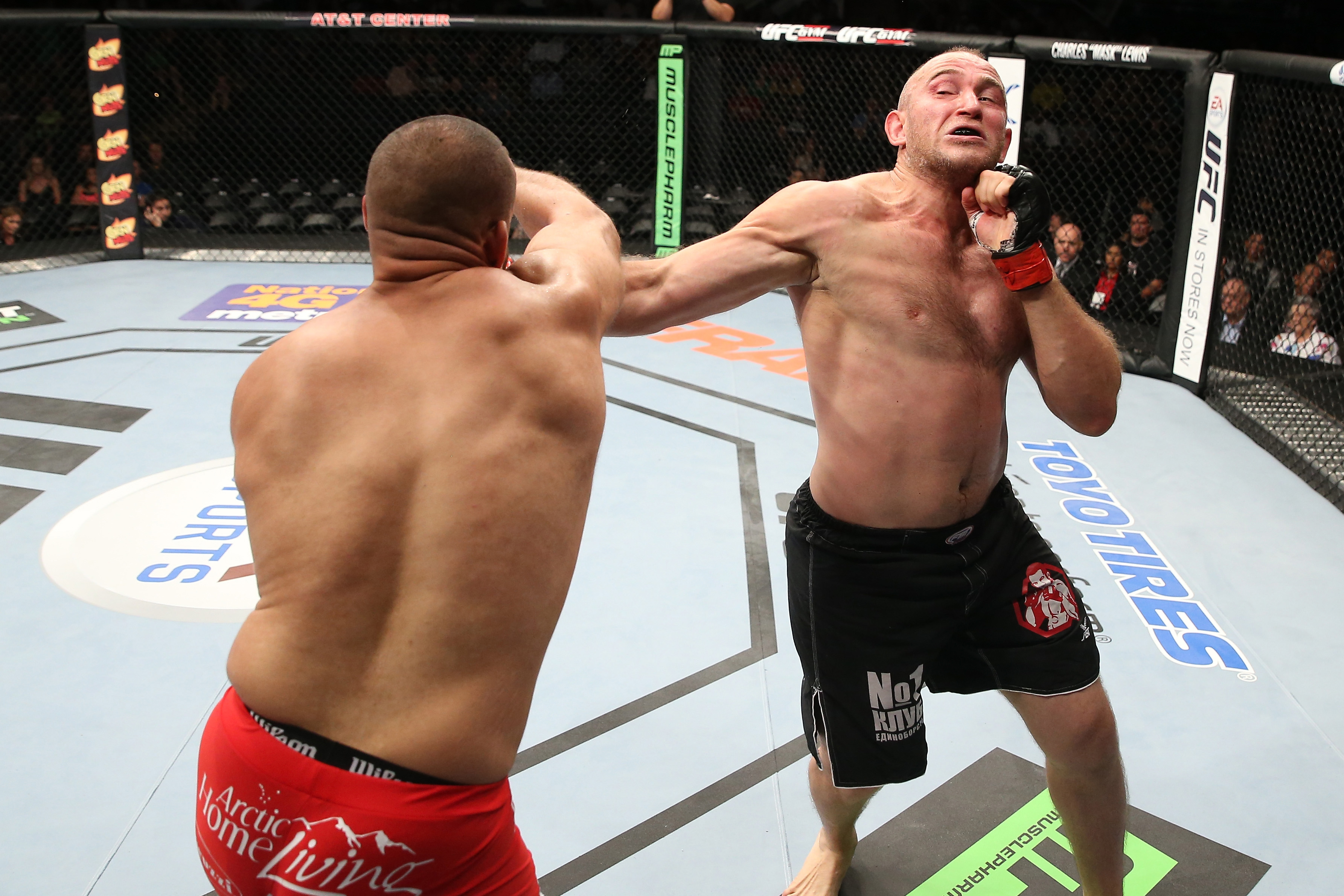 Hamilton with a right hand 90
seconds in, Oliynyk went to work on his real game plan, getting his foe
to the mat and finishing him. And he did so with what appeared to be
relative ease, as he got hold of Hamilton and finished matters with a
maneuver that produced a tap at the 2:18 mark. And while the finish was
announced as due to a neck crank, Oliynyk says that wasn't the case.

“I
used a special technique tonight that paid off," said Oliynyk. "It was
not a neck crank despite what they announced. It’s actually a position
that attacks the diaphragm and makes it very difficult for your opponent
to breathe. I was able to apply a lot of weight on his chest and hold
his head in position to prevent any escape. Eventually he was forced to
tap due to lack of air. I’m very happy with the win and I look forward
to my next bout here in the UFC.”

Maybe it can be called the Boa Constrictor.