In his latest column, UFC middleweight Josh Samman takes a look at the most iconic weight class in combat sports. 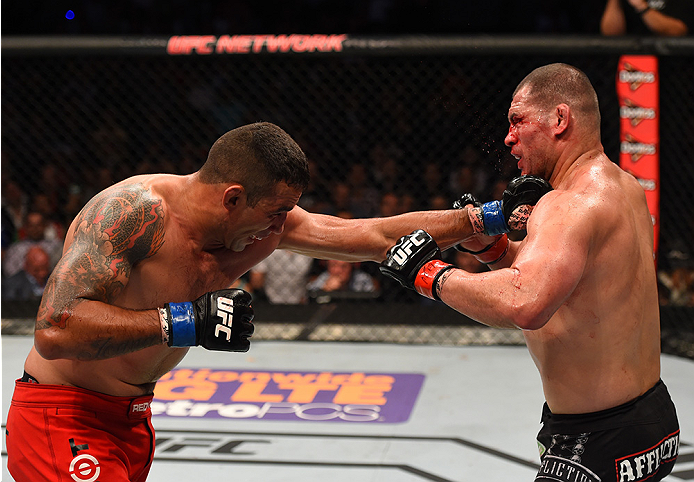 The heavyweight division has long been home to the handful of fighters that can truly call themselves the baddest men on the planet. No division boasts more Earth-shattering power, and few athletes in professional sports can claim more versatility than the list below. But what’s the state of the division and predictions for scheduled matchups? Read on to find out.

The champion’s second UFC stint has been a wildly entertaining one. Hopes were not high for the Brazilian coming off his bizarre loss to Alistair Overeem in Strikeforce back in 2011. His first fight back against Roy Nelson featured a polished striking game under the tutelage of Rafael Cordeiro, which he carried into his following bout with against Mike Russow. The world BJJ champion then went on to submit Brazilian legend “Minotauro” Nogueira before upsetting Travis Browne in the UFC’s first trip to Orlando. That fight earned him an interim title bout against Mark Hunt, where he survived an early onslaught by the “Super Samoan” to claim the makeshift belt as we all awaited the return of Cain Velasquez. In the unification bout in June, Werdum used superior conditioning, grit, and fight IQ to claim the one true heavyweight championship of the world.

With an unclear contender elsewhere, the UFC seems to be content letting the two go at it again while rest of the division sorts itself out. The former king is expected to rematch Werdum in early 2016, which, for Velasquez, will mark seven fights over the course of five years, against only three different opponents. While Cain may beat everyone not named Fabricio in the division, I think the belt stays where it’s at - around the waist of the Brazilian.

JDS was on the receiving end of several weeks worth of social media callouts, courtesy of Alistair Overeem. Since signing his bout contract for December 19 in Orlando, JDS has been the one firing at his foe, calling into question Overeem’s legitimacy after their 2012 bout was called off when “The Reem” failed a pre-fight drug test. Let’s hope both fighters make it to the fight this time.

Since losing to Stefan Struve in 2012, the Ohioan has rattled off four wins in five contests, with his only loss a spirited bout with former champion Junior Dos Santos. His most recent fight displayed a sense of calm and collectedness as he battered Mark Hunt around the cage for five rounds in a bout that featured one of the worst displays of refereeing in MMA history. Should he win his upcoming bout against Ben Rothwell at UFC Fight Night in Dublin – Ireland, not Ohio - it’s likely that we’ll see Miocic fight for a world title in 2016.

Arlovski’s recent bout with Frank Mir goes to show just how weird the Heavyweight division can be. This was a bout that could have happened 10 years ago, with the same title implications it had at UFC 191. I would have said before the fight that an Arlovski win merited a title shot, but I’m not sure how easy it will be to sell a heavyweight title fight coming off a questionable decision in a lackluster bout against the #10 fighter in the division. He earned some leeway with his incredible fight against Travis Browne, but I think he still has one more to go before a shot at gold.

The Hawaiian heavyweight was battling domestic abuse allegations outside of the cage, and while the UFC has reinstated him in the division, it’s still unclear what his immediate future will be. Until then, we can only assess what we do know about Browne, which is that he is an extremely dangerous fighter, with porous defense. Two of his last three losses have been by KO, with four knockout wins sandwiched in between. It will be interesting to see how his progress continues under the tutelage of Ronda Rousey coach Edmond Tarverdyan. When he comes back, I’d like to see him against Matt Mitrione.

Ben’s ascension to the top ten in the division has been a good underdog story. While he’s only competed once a year since beginning his three-fight win streak against Brandon Vera in 2013, we will have a better idea of where he fits into the division after his match against Miocic in October.

It’s difficult to understand how the fan favorite has stayed in the top ten, as he’s only won once in his last five contests. He is set to rematch #12 Antonio Silva at UFC 193. Here’s hoping for a win and a retirement from the legendary Samoan.

The UFC vet took some time off since his last bout, winning the Metamoris heavyweight belt in the process. He’ll likely be looking to use some of that grappling prowess against Roy Nelson in Japan in a few weeks. Nelson has never been submitted in MMA competition, but if there is one person most likely to do it, it’s Barnett.

Overeem seemed to take a bit of jumping around in order to find a home base where he is comfortable. He’s enjoyed a nice career resurgence since settling in at Greg Jackson’s, and he will be looking to take that momentum with him against JDS in December, where I’ll be sharing a card with the two in Orlando.

Frank did not look particularly interested in his bout with Arlovski. He put on a similar performance years ago against Roy Nelson, only this time the judges did not score in his favor. While his championship days may be behind him, he’s got plenty of job security. I think a bout against Struve would be fun.

There has been no date set for a return from the former light heavyweight champion, but when and if Jones does come back, I’d like to see him in a weight class full of fresh challengers. If there’s any time to throw his name in the hat, it’s now. Minus a “Rumble” Johnson matchup, we saw Jones have his way with most of the division at 205, and this way it looks as though they’re fighting over his scraps; a belt vacated by choice. Inserting his name opposite any of the top ten at heavyweight makes for a fascinating matchup.