Samman's Corner - Behind the Lines

In his latest column, UFC middleweight Josh Samman takes us into the MMA Masters gym as he and fellow UFC vets Jim Alers and Ricardo Lamas prepare for their upcoming bouts. 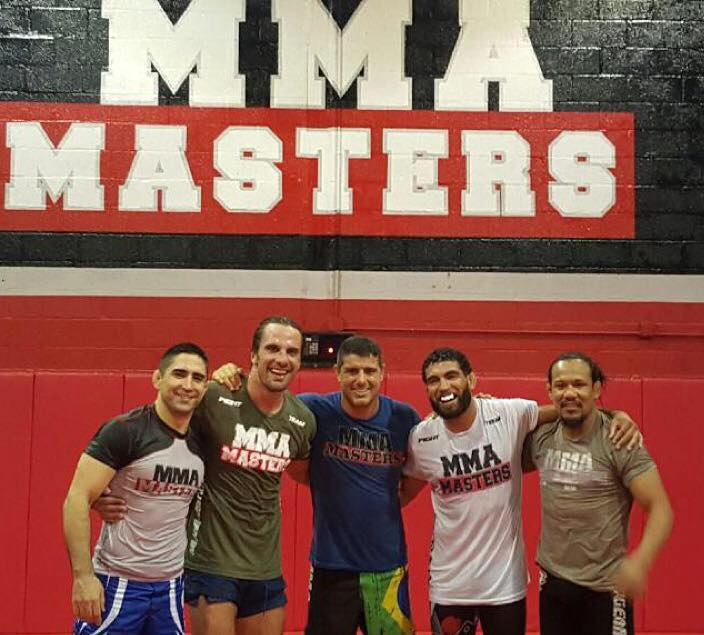 The fight is won or lost, far away from witnesses.
It is won behind the lines, in the gym and out there on the road,
Long before I dance under those lights
-Muhammad Ali

A stocky Brazilian in a loose, cutoff t-shirt is on the center of the mats. The top half of one of his arms is tattooed in a tribal pattern, the lower half of the pattern on the other arm. He has his hair tightly wound on the back of his head, a sort of trademark before it became a hairstyle. He’s floating his foot in the air as he demonstrates the proper posture for a kick, instructing the fighters on the body mechanics he wants. His heels are large and round, and could be mistaken for flesh-covered kettlebells. His movement exhibits decades of experience.

The teacher’s name is Master Cesar Carneiro. He was the martial artist featured to represent Capoeira in the movie Bloodsport, and is now one of two leaders that comprise MMA Masters. The gym name is painted high on the walls, and is on the shirt of every student in the room, including my own. We watch his instruction, then disperse with our partners to practice the technique given.

The speakers that hang from the trusses in the 20,000-foot complex are blaring rhythmic Brazilian music, though it alternates back and forth to hip hop frequently. A quick glance around the room gives an onlooker the wide scope of diversity that embodies the team. A brief listen gives an even better idea. Portuguese, English, and Spanish are all being spoken, usually in that order. Many members of the gym have become bilingual, with some fluent in all three tongues. It is just one aspect of an “always learning” mentality that runs strongly here.

The morning class we're in is dedicated to the competition team. There are 20 or so of us, all with different levels of experience. Many of the amateurs are preparing for their upcoming bout at the Hard Rock, in a locally owned promotion I’ve organized for years. Several professionals that haven’t made it to the big show yet prepare for bouts in various events. Bahamian-bred Rico Farrington, who is riding a recent first round KO in Howard Davis’ Fight Time Promotions, helps Colombia native Danny Chavez, Ecuadorian Frank Carillo and countryman Anderson Sonzera are getting ready for an early December card in Brazil. Choctaw Indian Brok Weaver joins the group as he laces up to compete in rising promotion Island Fights on November 21. Each of them train for their adversaries with fervent diligence, each hungry to make a statement.

There are four of us, however, that are preparing to make statements on the largest of stages, and while the momentum that our academy enters 2016 with will collectively rest with us, there is much at stake for each of us individually.

Peruvian born Luis “Baboon” Palomino rides first into battle on November 20, as he travels to Phoenix, Arizona to once again stake his claim as the number one contender to Justin Gaethje’s lightweight belt in the World Series of Fighting promotion. The Comerica Theater will be home to the company’s first one-night eight-man tournament, with the winner taking home $70,000 and a title shot. Palomino has challenged the champion twice, coming up just short in brutal bouts that are both in the running for fight of the year.

Palomino has been with Master Cesar the longest, and serves as patriarch for the team. He acts both as leader and enforcer, helping corner up and coming fighters, and introducing new members to the team with friendly sparring sessions.

He is confident leading up to the tournament. I expect him to dominate the bracket, although I’d ultimately prefer to see him at 145. I try to ask him once what the cost of all of this is, another crack at Gaethje, but he’s having none of that talk. Third time's a charm, he insists.

In the cage the following night is Palomino’s chief training partner, Ricardo Lamas, who’s taking a detour from navigating the featherweight elite to welcome Diego Sanchez to yet another drop in weight class. The odds are heavily in Rick’s favor, and the location of the bout lends validity to the matchmaking, as both combatants are of Mexican descent.

While Palomino may be team captain, none command the attention of the room as effectively as Lamas. He splits his time between Chicago and Miami when in camp, and splits his training partners' sides in the process. He is a natural comedian, with impeccable impersonations of all the charismatic personalities in the room. Practices often turn into The Rick Show as we all try to keep up, with no avail. The only way to frazzle him, in fact, is to mention a certain Irishman.

Fighting third on the big stage, of Puerto Rican descent, is Jim Alers. Jim is the newest member of the team, and is sharing a fight card with me in his hometown of Orlando. He enjoyed an eight-fight winning streak before entering the UFC, where he won his debut and tasted defeat only to fellow prospect Chas Skelly.

Alers is finding his own as he settles into the new camp, after a failed foray into American Top Team. He is a large underdog, and will be fighting a member of the gym he just left in Cole Miller. He has much to prove, but much to gain, should he defeat an always game Miller.

Lastly, there is myself. The story of my upcoming fight, I think, is tying up loose ends, as I try to finally capture a UFC win in Florida that has eluded me twice before. My first scheduled bout against Caio Magalhaes was to be at the Amway in Orlando last April before being derailed by injury. The second time we were scheduled to fight, the event itself was moved from the Hollywood Hard Rock near my house, across the country to MGM in Las Vegas. Third time’s a charm, as Palomino says.

Orlando is centrally located between my hometown of Tallahassee and where I live in South Florida now. For months at a time I’m absent from the lives of friends and family life, as I immerse myself in my alternate universe of obsessive workouts and practices. One primary aspect of this training camp has been a focus on jiu-jitsu to prepare for the grappling chops of upcoming opponent Tamdan McCrory. For that task, there is none better equipped than the other half of MMA Masters, Sensei Daniel Valverde.

Valverde is a Brazilian Judo phenom who made the transition into jiu-jitsu, where he won a world no-gi championship in 2007, and defeated multiple time gi and no-gi world champion Vinny Magalhaes in an open weight match in 2009.

Where Valverde shines most is in his amazing ability to compete with his elite athletes, no matter the size. The sole reason I’m remotely able to even keep up with Valverde is on account of a stark weight difference. We have a fantastic rivalry when rolling, and there is something special about having an instructor who can practice live application, put you in serious danger, and correct you on your mistakes every step along the way.

Academies where grappling instructors never participate in group rolls are suspect, in my opinion. It is important to be able to humble students on occasion, but it’s also about loving to practice the art like we love it; about knowing what it’s like to miss the mat after too many days away. I’m comforted knowing that I have an instructor whose skill I will never catch up with.

The final day of the week is always dedicated to sparring, 10 rounds of it. It is there as a tool for those who need it, to work out kinks in strategy, or gain confidence from the number of consecutive rounds done. It is a rite of passage that must be done at least once by everyone, although frequency in sparring for myself has subsided considerably; complaints of me going too hard with sparring partners and my own consideration for avoiding future health issues being catalysts. When I am there on Fridays, I do my best to encourage use of headgear in younger fighters that are looking to prove their worth.

Much of fighting is just that: proving worth. To each their own in the manner that they do it, but when I think of fighters from my gym, I think of fighters that do it with personality and flavor, each with an exclusive style of self-expression through fighting. We are inspired by each other’s successes, and guided by leaders who offer unique perspectives on fighting that few else have.

By the end of the year, we will see how our ideologies have stacked up against those of our competitors, and that, to me, is the essence of martial arts.