"Montreal is always my favorite place to fight. The
crowd in the Bell Centre is always unbelievable, especially on a night
where GSP is coming out to fight." - Sam Stout 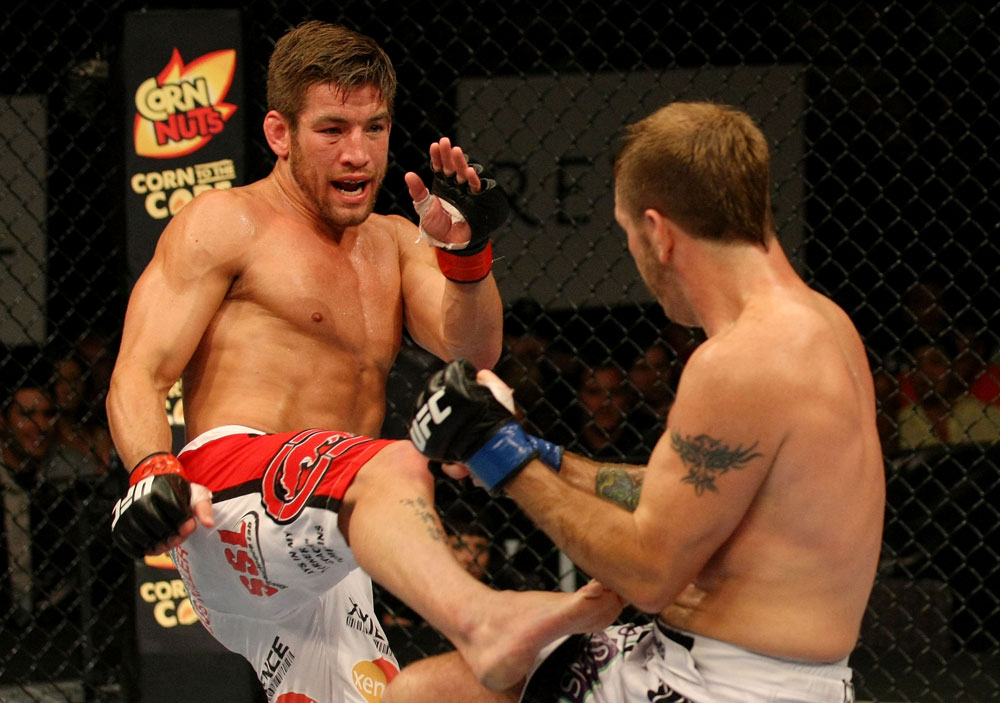 There aren’t words that can adequately explain how difficult the last year has undoubtedly been for Sam Stout.

Coming off an electric victory over Yves Edwards at UFC 131 that sent the crowd at Rogers Arena in Vancouver into a frenzy, the lightweight veteran who has never been knocked out inside the cage was put down for the count outside of the Octagon when his coach, mentor, and brother-in-law Shawn Tompkins died unexpectedly on August 14, 2011. The two had been working together since Stout was 16 years old, and throughout his career, the one constant in Stout’s corner was “The Coach.”

No matter where their careers take them, the trio of Stout, Mark Hominick, and Chris Horodecki will be forever linked to their coach, and will forever represent the Team Tompkins name with great pride, just as they did with Shawn by their side.

One of the greatest challenges when you lose someone you care about is figuring out how to move on. For the last 12 months, that’s exactly what Stout has been trying to do, and after a struggle that he understatedly describes as difficult, the 28-year-old UFC veteran is finally feeling comfortable in what is now the second chapter of his career.

“It’s been tough, but it’s been a learning experience, and a lot different,” explains Stout, who returns to the cage Saturday night to take on fellow Canadian John Makdessi at UFC 154. “When Shawn was around – I started training with him when I was 16 years old, so he would kind of do everything. He would tell me when to get up. He would tell me when to train. He would tell me what to do, what I needed to do, what my game plan was, and I would just go and do what he said. Now I’ve had to be a lot more self-sufficient. I’ve had to figure out my own training schedule, and come up with more answers on my own.

“It’s been very different. Myself, Mark, and Chris Horodecki – all the guys – have come to a point where we’re all still training together and working together, but in terms of coaching, we’ve all kind of gone our separate ways and found what works for us. At first we all tried to work with the same people, but we couldn’t find anybody that could train us all or that worked for us all the way Shawn did. So everyone is kind of just doing what works for them. It’s been really good. Everyone is starting to feel more comfortable I think.”

Getting to this point has been a long journey for Stout.

Scheduled to face Dennis Siver at UFC 137, the veteran of more than 25 fights understandably withdrew from the bout at the end of August. The momentum that came with consecutive victories and his blistering stoppage win over Edwards was gone. When he returned to the cage against Thiago Tavares at UFC 142 in January, Stout still wasn’t completely ready, but he knew it was something he needed to do.

“I was kind of in limbo for a bit after Shawn passed away. I had to pull out of the fight (with Dennis Siver) because I didn’t feel like I was emotionally ready to do it. The fight in Brazil, physically I felt there, but I still don’t think I was mentally ready; there was a lot running through my head still going into that cage for the first time without Shawn.

“That being said, I didn’t suck. I didn’t get smoked or anything,” Stout adds with a laugh. “It was good to get in there and see that I can still hang. I just feel like I could have performed better on that day.”

Six months later, Stout returned to the cage to battle Spencer Fisher in the rubber match of one of the UFC’s most entertaining rivalries. Before he hit the cage with “The King,” the London, Ontario native started working with Mark DellaGrotte and the team at Sityodtong in Boston.

“Having Mark in my corner for the Spencer fight was what I think I needed,” admits Stout. “It was somebody that was that voice in the corner telling me what to do that I had complete faith and confidence in, and I think that was what I was missing.”

In addition to feeling comfortable with who was in his corner, Stout was much more prepared to be back in the cage in June.

He and Fisher started their seventh round together the same way their previous six had played out – with the two circling each other in the center of the cage, trading leather, looking to land the better blows.

When Stout started come out on the wrong end of the exchanges, the 28-year-old kickboxer broke out a new weapon from his arsenal to change the pace of the fight and swing the round in his favor, shooting in on Fisher and dragging him to the canvas. It was a tactic Stout returned to throughout the final two rounds en route to earning a unanimous decision.

“It just was something that I needed to go out and do, and prove to myself,” said Stout of his wrestling. “It’s part of my arsenal; I just had to have some faith in it. Now, after that fight with Spencer and making those takedowns work for me, I have faith in those takedowns, and it gives me more options.

“I’m always going to be primarily a striker – I’m not trying to claim to be a wrestler now – but it’s something that I have shown that I have good takedowns, and I can make them work for me.”

This weekend, Stout will look to make both his old and new weapons work for him in the cage against Makdessi when the two square off at the Bell Centre in Montreal. It’s a city Stout is exceptionally familiar with, as 10 of his 27 professional bouts have taken place in Canada’s second largest metropolitan area.

After a tumultuous year, things are finally starting to feel normal and natural to Stout again, and returning to compete before what is sure to be a raucous crowd in Montreal is something he’s definitely looking forward to, even if he doesn’t have the full support of the audience this time around.

“I went out (to Boston) to work at Sityodtong with Mark and his guys. It was a great two weeks. We kind of had to cram a little bit into two weeks, but Mark and I have worked together before, so we were able to get lots of work in – a good, hard push for two weeks with a lot of strategy and game planning. (He’s) somebody I feel really comfortable with. I feel like we clicked really quickly, and I feel really confident going into this fight. Having him in my corner going into the last fight with Spencer, and this time we’ve gotten more work in together, so I’m feeling even more confident.

“Montreal is always my favorite place to fight,” continues Stout, who has gone 1-2 in his previous three UFC appearances in the city. “The crowd in the Bell Centre is always unbelievable, especially on a night where GSP is coming out to fight, and they’ve always been really good to me in the past; I’ve always had a lot of fan support there. (This time) it might be a little bit of a split crowd since I’m fighting a guy who trains out of Montreal.”

This year has been about starting over for Stout.

If January was about just proving he could still do it, and June’s win over Fisher was him starting to get his legs back under him again, don’t be surprised if the man known as “Hands of Stone” is the best he’s ever been on Saturday night.