"People like to see standup fights and good scrambles, which I end up in a lot. I take pride in being exciting.” - Sam Stout 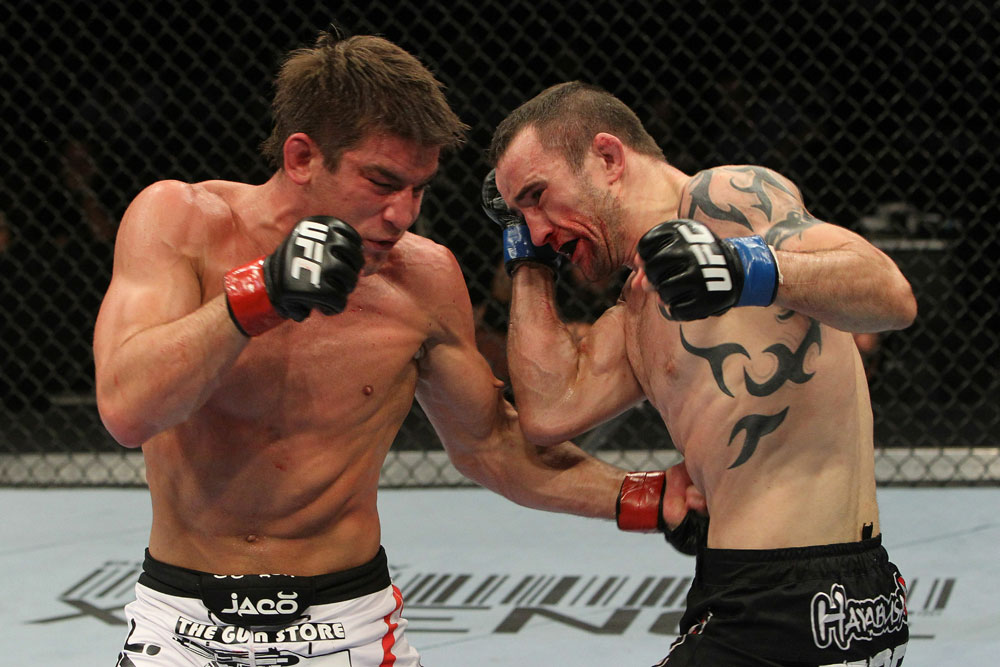 If you don’t like watching Sam Stout fight, then you’ve probably never seen Sam Stout fight. “Hands of Stone,” as his moniker goes, is downright masterful when it comes to energizing a crowd and holding them in suspense. The lightweight’s 10 UFC bouts have produced four Fight of the Night awards.

“It’s not my plan,” Stout, days before meeting MMA pioneer Yves Edwards at UFC 131 in Vancouver, said of winning the coveted awards. “I come out and I fight as hard as I can every time. I like to entertain the fans and I like to slug it out. I like to hear the crowd get loud and there’s nothing I hate more than hearing them boo. People like to see standup fights and good scrambles, which I end up in a lot. I take pride in being exciting.”

The 27-year-old Canadian’s penchant for high drama usually ends with him having his hand raised; Stout has prevailed in three of his past four fights, his only setback being a split decision loss to thunder-fisted lightweight contender Jeremy Stephens. The only knock on Stout is that he hasn’t finished an opponent in nearly three and ½ years, spanning seven fights.

“Of course it bothers me that I haven’t finished those fights,” said the Shawn Tompkins protégé, “but as long as I’m winning and leaving it all in the cage then I’m not losing any sleep over it.”

Though most of Stout’s fights have been in his homeland, he has never fought professionally in Vancouver – in MMA at least. The decorated kickboxer competed in a four-man Muay Thai tournament years back, winning two fights in one night to win a North American title.

“It’s a great city and I’ve taught a seminar there,” he said of Vancouver. “I’ve got some friends there and it’s a beautiful city – one of my favorite cities – and I can’t wait to get there.”

In Yves Edwards, Stout (17-6-1) faces a gifted finisher who is equally dangerous standing and on the ground. Edwards (40-16-1) has finished 31 foes, 14 by knockout. The 34-year-old American Top Team representative has won six of his past seven.

“Of course I know about Yves Edwards because I’ve been an MMA fan since I was a kid,” Stout said. “I’ve seen lots and lots of his fights. He’s a very dangerous guy. What makes him dangerous is pretty much everything. He is a really solid kickboxer and boxer, his submission game is dangerous and he’s very experienced in the cage, so I really have to be ready for anything with him. I mean, it’s freakin’ Yves Edwards. This guy is legit and he’s been proving it for years.”

Stout’s teammate, Mark Hominick, fought Yves Edwards back at UFC 58, stunning the top lightweight with a triangle armbar submission. Hominick has long since dropped to featherweight, waging a spirited battle against UFC featherweight kingpin Jose Aldo at UFC 129 in Toronto. Stout was there in April watching from the third row, on the edge of his seat throughout the five-round thriller.

“I have so much invested in Mark emotionally; he’s like a brother to me, so when he gets hit, I get hit along with him,” Stout said. “That’s how I feel. My heart was in my stomach the whole time. There were a couple times where he scared us and got rocked with some punches but it’s a testament to what Mark is made of that he fought his way through it and came back to win the last round. And a lot of people thought Mark might finish him in that last round. So it was a rollercoaster ride watching that fight but I was happy Mark showed what kind of heart he has.

“He made a guy who is, in my opinion, one of the top pound for pound fighters in the world (Aldo), look human for the first time. So I was real proud of Mark. He has always been one of those guys that I have aspired to be like in the gym. He’s the hardest working guy I know, he’s so dedicated and lives, eats and breathes mixed martial arts. So I was just so happy for him.”

Hominick will be in Vancouver this week helping Stout fine-tune his skill set before Saturday’s event. Because he helped Hominick get ready for his title fight, Stout said he underwent a 12-week training camp versus a normal eight-week camp.

“I stepped it up for this one. I did a lot of things better for this camp,” Stout said. “I don’t like to make predictions but I’ll tell you this: You’re going to see the best Sam Stout that you’ve ever seen. I’m in the best shape of my life and I’m going to leave it all in the cage like I always do.”