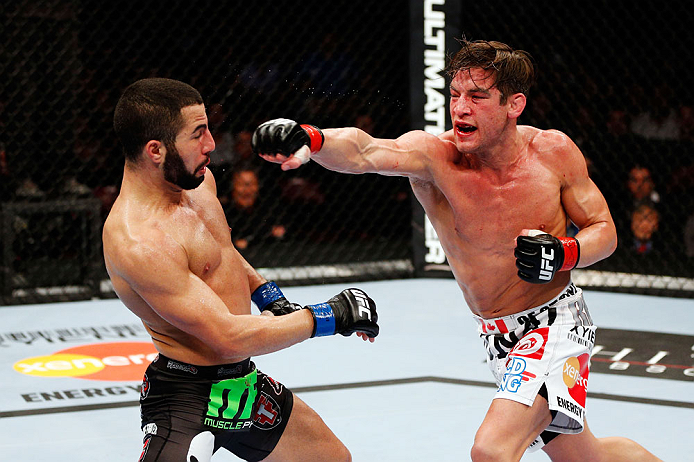 There is a secret to the success of Sam Stout, a method to the madness that's defined his career. A five-time Fight of the Night winner - three consecutive at one point - the "Hands of Stone" has gone the distance in all but one of his three fights since 2007. Even in defeat, Stout rarely leaves an opponent unscathed. The last time he cried uncle was to Kenny Florian in 2006, and the next time he sees stars and counts ceiling lights after a knockout loss will be his first.

Two elements are conditioning and resolve. If you ever expect Stout to quit or his gas tank to reach the letter E, think again.

“I’m not going to get tired or get locked into a submission and give up," Stout said. "I’m going to keep fighting until the end. My submission game is getting better and better, but submission defense is something I do pretty well. For some reason I just got born with a good chin and can take a punch.”

The secret is actually a recipe. For one, Stout fights on will and instinct. Those Fight of the Night honors, says Rowan Cunningham, his jiu-jitsu coach at the Adrenaline Training Centre in London, Ontario, Canada, happen due to Stout's courage and willingness to stand in the pocket and trade punches. Very few can, pardon the old as dirt and rocks cliché, take a licking and keep on ticking.

“Sam has really unbelievable survival instincts,” Cunningham said. “He’s hung in there with jiu-jitsu black belts - Fabio (Holanda in February, 2007) had him in a lot of trouble. He didn’t know much jiu-jitsu back then at all, just getting by on instincts and a ton of heart, and a lot of strength and explosiveness. I think what I’ve been able to do is add a lot of technical details to his jiu-jitsu game, so he can do the same he was doing before, but more efficiently and see what’s going on instead of surviving all the time."

A survivor of 29 MMA fights, 15 in the UFC, Stout (20-8-1 MMA, 8-7 UFC) enters UFC 161 on June 15 4-2 in his last six and perhaps due. His opponent is former WEC fighter James Krause (19-4 MMA, 0-0 UFC), an injury replacement for Isaac Vallie-Flagg. One of 32 fighters who competed on The Ultimate Fighter: Live in 2012, Krause was eliminated early from the competition, but takes a seven-fight winning streak into Winnipeg. Seventeen of Krause’s 19 wins have come via stoppage, so you know he’s going to explode right out of the gate.

“He’s going to be hungry - he’s been trying to get into the UFC for a while now,” Stout said. “He throws that lightning high-kick very quick, so I have to keep my hands up, I have to keep moving and I have to be very alert.”

If the fight turns into a frenzy, perhaps Stout will earn his elusive knockout similar to how he planted Yves Edwards into the canvas 3:52 into Round 1 at UFC 131. Cunningham would love to see a repeat performance, especially given the unpredictable and subjective nature of cageside judges. But as to why Stout often leaves his fates in the hands of three people, he shrugs his shoulders and admits to the knockout's degree of difficulty.

“I’d like to finish every fight, everyone does, but it’s not that easy to do, Stout said. “It’s a difficult thing actually.”

“It’s the UFC - it’s not easy to knock them out or submit them. I’m not really much of a submission guy anyway. I can go hunting for those knockouts, but when you do that, it’s when you put yourself in more jeopardy and that’s when you end up getting knocked out yourself. I let it all hang out, but I don’t take unnecessary risks. When the knockouts come, they come. If they don’t come, they don’t come. What’s most important to me is getting wins.”

While the result was familiar, Stout's last fight, a split decision win over Caros Fodor at UFC 157, was an anomaly, with the Canadian having to fight out of the clinch and keep his back against the cage. He preferred to keep the bout more in the open and generate his usual excitement, but it got him back into the win column and set him up for potentially one more run through the lightweight division. Though Fodor at times took him out of his comfort zone, Stout continued to work off the fence instead of hugging it out.

“What he did was very difficult and most people don’t appreciate it,” Cunningham said.

Since first meeting his future trainer and brother-in-law, the late Shawn Tompkins, as a 16-year-old skateboarder with little direction, Stout has appreciated his lot in life. He won 10 of his first 12 MMA matches, including the first of his riveting trilogy with Spencer Fisher. Inside the cage he's the Hands of Stone, a moniker earned during a run of five straight knockout wins early in his career. On the outside, he's a defender of the sport's often negative perception and those too small and timid to defend themselves.

“We’ve all been picked on or made to feel small. But to inflict that on someone else ... is something that has to be stopped," said Stout about a recent anti-bullying rally in which he participated with fellow UFC fighter/countryman Sean Pierson.

“There are a lot of negative connotations that are attached to the sport. It’s up to us to be responsible, to let younger kids know that what we do is an intentional sport. Going to pick on somebody in the schoolyard or smaller than you, it’s not OK. It’s something we stress at our kids program at the gym. It’s something that whenever I get a chance to be involved in any charities and rallies, I jump at the opportunity."

Come June 15 in Winnipeg - he's 13-3 in his home country - Stout's mission is to seize the day. Because Krause also pushes the pace, it's a dangerous fight with a lot of potential. Fight of the Night is a familiar refrain for the Hands of Stone. He would just love that knockout. After all, he’s due.